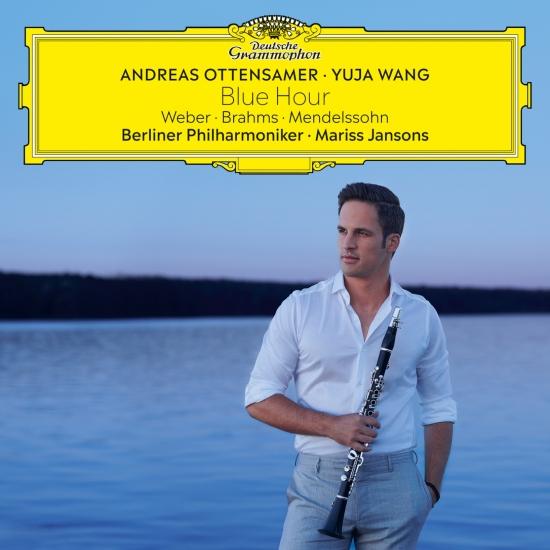 Austrian clarinettist Andreas Ottensamer has joined forces with Chinese pianist Yuja Wang to record an album of works by composers of the Romantic era. Blue Hour, set for release on March 8 by Deutsche Grammophon/Universal Music Canada, the country’s leading music company, features some of the jewels of the repertoire including Brahms’s Intermezzo in A major, Mendelssohn’s Songs without Words – arranged for clarinet and piano by Ottensamer – and Weber’s virtuosic Grand Duo concertant. The album reveals Ottensamer to be not just a sensitive and responsive chamber partner, but also a brilliant soloist, as he gives a dazzling performance of Weber’s First Clarinet Concerto, recorded with the Berliner Philharmoniker and Mariss Jansons.
Andreas Ottensamer marks the renewal of his exclusive relationship with Deutsche Grammophon artist with the release of Blue Hour. Joining him on his “comeback” album is star pianist Yuja Wang, of whom he says, “She’s a close friend and a wonderful musician.”
Ottensamer was keen to record works that have particular personal significance for him. Brahms has long been his favourite composer and the clarinettist is especially fond of his piano music so an arrangement for clarinet and piano of the Intermezzo, op.118 no.2 was an obvious choice. As Ottensamer says, “Towards the end of his life Brahms met the clarinettist Richard Mühlfeld and was inspired to write a number of works for the instrument. I feel there are a number of connections here and that transcriptions for clarinet of these solo piano works work well.”
Mendelssohn’s piano music too is very important to Ottensamer. “I think Mendelssohn has a very strong sense of structure,” he explains. “He wrote in a meticulous manner, which I really admire, but he also has the power to move you very deeply, as he does in the Songs without Words, some of which I’ve arranged for clarinet and piano for this recording. There’s a directness and profundity to the emotion they convey. I think listeners will feel it when they hear these pieces.”
What fascinates Ottensamer about these piano works is that, despite their differences, “they all have a wonderful songlike character”. This led him to the idea of placing the Songs without Words alongside Weber’s First Clarinet Concerto, a work which, as he emphasises, has “beautiful cantabile, lyrical parts” alongside passages of breathtaking virtuosity.
“The Weber Concerto was recorded live, which was a really emotional experience,” notes Ottensamer, who is principal clarinet of the Berliner Philharmoniker. “Some pretty powerful feelings take over when you’re up there on stage, especially when you’re playing with your own orchestra.” It meant a great deal to him to perform as a soloist with his colleagues: “Of course I play with them all the time, but usually I’m sitting within the ranks of the orchestra.” Another key factor here was working with Maestro Mariss Jansons: “He’s a wonderful conductor with a dynamic personality, and he’s also a good friend. It was incredibly inspiring to make this recording with him.”
The Romantic repertoire is especially close to Ottensamer’s heart, who says he feels completely at home when performing works from this period. His main concern is to bring his own character and experiences to the music and to share his interpretations with others. “That way they understand something about who you are as a person as well when they see you perform,” he observes. “Sharing that sense of yourself through a recording is a huge challenge, of course, but a really exciting one!”
Andreas Ottensamer, clarinet
Yuja Wang, piano
Berliner Philharmoniker
Mariss Jansons, conductor 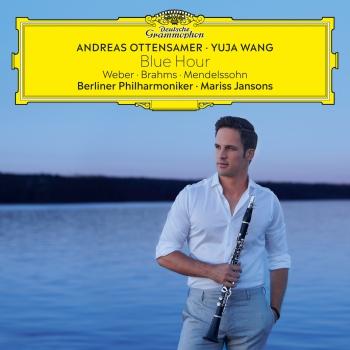 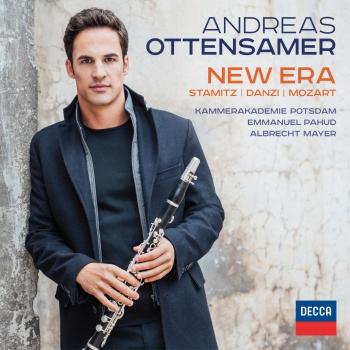 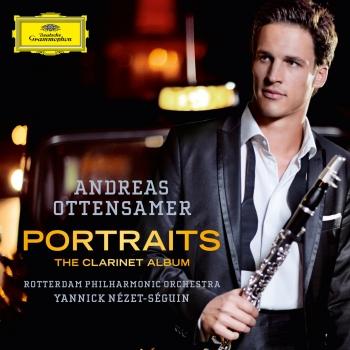 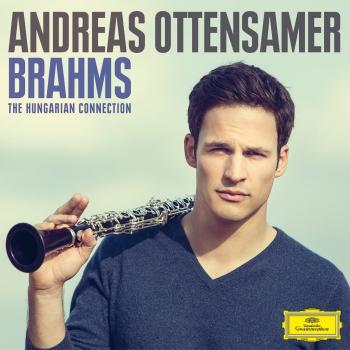 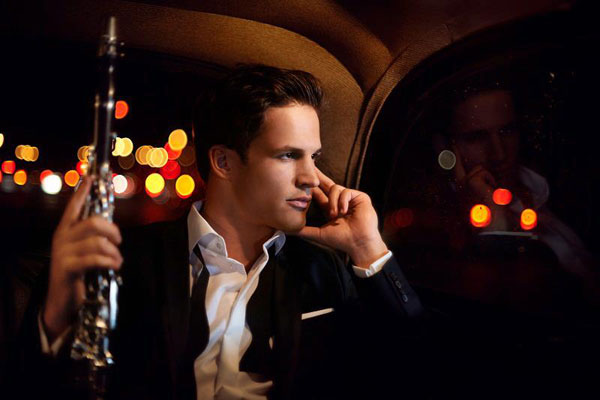 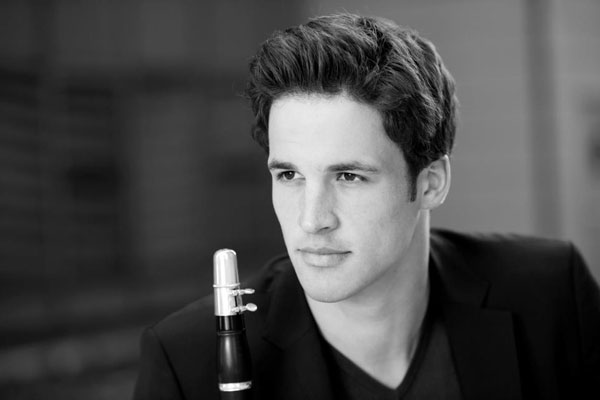 Andreas Ottensamer
has captured audiences and critics alike with the singular beauty of tone that he coaxes from the instrument. At one stage he studied the cello, which perhaps has helped to imbue his approach to the clarinet with a soulful depth. His Viennese instrument, with a wider bore than the closely related German-system clarinet, produces a particularly dark, expansive and warm tone, which he exploits to full advantage.
Born in 1989, Ottensamer comes from an Austro-Hungarian family of musicians and was drawn to music early, receiving his first piano lessons when he was four. At the age of ten he began studying cello in his home town at the University of Music and Performing Arts Vienna, then changed to the clarinet under Johann Hindler in 2003.
Andreas Ottensamer gained his first orchestral experience as a deputy in the orchestra of the Vienna State Opera and the Vienna Philharmonic and as a member of the Gustav Mahler Jugendorchester. In 2009 he interrupted his Harvard studies to become a scholar of the Orchestra Academy of the Berliner Philharmoniker.
As principal clarinettist he has played with the Deutsches Symphonie-Orchester Berlin from July 2010 to February 2011 and with the Berliner Philharmoniker.
Ottensamer has won first prize in competitions for clarinet, cello and piano, and performs as a soloist and chamber musician throughout the world in venues such as Musikverein Wien, Konzerthaus Wien, Brucknerhaus Linz, Musikverein Graz, Philharmonie Berlin, Tempodrom Berlin, De Doelen Rotterdam, and Seoul Arts Center. His artistic partnerships include work with Murray Perahia, Leif Ove Andsnes, Leonidas Kavakos, Janine Jansen, Clemens Hagen and Yo-Yo Ma. In 2005 Andreas Ottensamer founded the clarinet trio The Clarinotts with his father Ernst and brother Daniel, both solo clarinettists in the orchestra of the Vienna State Opera and the Vienna Philharmonic. Several works have been dedicated to the ensemble.
In February 2013 Andreas Ottensamer entered an exclusive recording partnership with Deutsche Grammophon/Mercury Classics, making him the first ever solo clarinettist to sign an exclusive agreement with the Yellow Label. His first album, Portraits – The Clarinet Album, will be released in the summer and features concertos by Copland, Spohr and Cimarosa, plus arrangements of short pieces. His partners are the Rotterdam Philharmonic Orchestra under Yannick Nézet-Séguin.
He said of the recording: “This album poses the challenge of jumping between different styles and ways of playing, but at the same time I set a high priority on maintaining my personal interpretation and sound.”
For a man who is so dedicated to music, Andreas Ottensamer is also passionate about sport. For many years he was a tennis tournament player, and together with his brother he founded his own football club, the Wiener Virtuosen, in 2007. The team plays successfully in the Wiener DSG league and Ottensamer still travels to Vienna for matches whenever his schedule permits.
In 2013 this schedule includes performances of the Busoni Clarinet Concertino and Copland Clarinet Concerto at the Seoul Arts Center in Korea (March), concerts with the Brahms Ensemble Berlin in Baden-Baden and Japan and appearances with his own Clarinotts at the Musikverein in Vienna (April). In May he undertakes a Japanese tour, playing repertoire from his debut album – including performances as a soloist with the Nagoya Philharmonic Orchestra – and giving masterclasses in Tokyo and other cities.
Apart from his extensive activities within the world of classical music, Andreas Ottensamer has widened his horizon to other musical fields, resulting in a collaboration and recording with Tori Amos on her album Night of Hunters.
The beauty of tone and distinct musicality over a wide range of styles have won extensive critical plaudits for Andreas Ottensamer. Sybill Mahlke wrote in Der Tagesspiegel of his “limitless dynamic range . . . he plays with a vitality that pushes boundaries.” NRC Handelsblad said: “Andreas Ottensamer melts with his clarinet . . . he is an ‘übersolist’ and a phenomenon.” Rebecca Schmid wrote for MusicalAmerica.com: “Solo clarinettist Andreas Ottensamer played with particular finesse . . . and a touch of melancholy.”