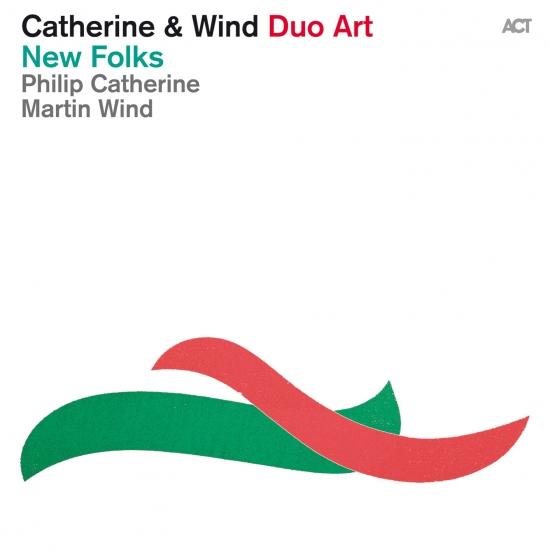 The Belgian guitarist Philip Catherine is a European jazz legend. The now 71-year-old Catherine started playing professionally when he was only 17 and toured with artists such as Lou Bennett, Dexter Gordon, Jean-Luc Ponty, Chet Baker (with whom he recorded 6 albums), Tom Harrell and many others. In 1978 he received the “Artist of the year” award by the German Phono-Academy, and Charles Mingus gave him the nickname “Young Django”. This is also a result of his impeccable time feel, which allows him to sound relaxed and loose even while playing the most breathtaking up-tempo passages. But it is not mainly his technique and dexterity that sets him apart; furthermore what made him so unique is his acoustic guitar sound, as well as an improvisational style, which is based not on other guitarists, but on some of the great horn players in jazz.
When Martin Wind was studying bass in his hometown of Flensburg/Germany in the 80s one day his teacher gave him a copy of Philip Catherine’s duo recording “The Viking” (1983) with the Danish bass legend Niels-Henning Oersted Pedersen. “That was the first jazz recording that I listened to over and over again and as a result of that had a big influence me,” remembers Wind. He ended up pursuing a professional career in music following Catherine’s example, who at that time was already considered one of the most important European jazz musicians, and about who the South German Newspaper in Munich just recently wrote that he “plays things that cannot be heard by any other guitarist in the world today”.
Martin Wind also made his way: he studied classical bass at the Conservatory in Cologne, Germany, was a founding member of the National Youth Jazz Orchestra and ended up with a scholarship to study at New York University. In 1996 he moved to New York City, but unlike many others he was meant to stay and has since then become an integral part of the scene working with the trios of Bill Mays, Don Friedman, Dena DeRose, Jim McNeely, Matt Wilson’s “Arts and Crafts”, the Vanguard Jazz Orchestra and many others.
While touring in Germany about two years ago ACT label boss Siggi Loch heard Wind perform in Berlin. Siggi had Wind on his radar for some time already, was impressed by his tasteful bass playing again and offered to do a duo recording together with – you guessed it: Philip Catherine!
It took a while before the slightly surprised 71-year-old Belgian was able to make himself available for this project. However, in the spring of 2013 Catherine and Wind finally met for a short tour through German Clubs to get musically and personally acquainted for their first ACT – album “New Folks”. Martin Wind apparently came prepared for the musical encounter with his longtime hero, which seemed to inspire the veteran Catherine.
You can pick any given song on the album from “Blues in the Closet” with its almost rock-like, electric facets and archaic Blues phrases, over the 1932 Irving-Berlin-Standard “How deep is the ocean”, from a homage to George Shearing “Hello George” to the melancholic finger style adaptation of Paul McCartney’s later work “Jenny Wren” – at all times these two complement each other perfectly: Catherine’s playing that is technically unique and never seems to stop discovering new lyrical guitar sounds, and Martin Wind’s bass, that is always strong, yet at the same time elegant and lush.
Both are esthetes that love melodic jazz with Swing roots. Probably the best example of how Wind and Catherine tap into the tradition is the old standard “Old Folks”: without any haste or superficial virtuosity, but instead with complete mutual trust they find the ideal tone, the right timbre for each note, lining up sound and space perfectly.
This is the key to the encounter of Martin Wind and Philip Catherine: in the spirit of the Old Folks from Swanee River the New Folks create jazz in the club and in the studio – a meeting of generations marked by harmony and respect.
Philip Catherine, guitar
Martin Wind, bass
Recorded at Realistic Sound Studio by Florian Oestreicher, April 3 & 4, 2013
Mixed and mastered by Klaus Scheuermann
Produced by Siggi Loch 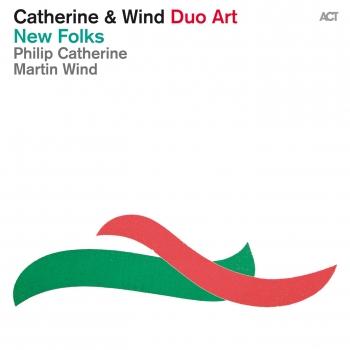 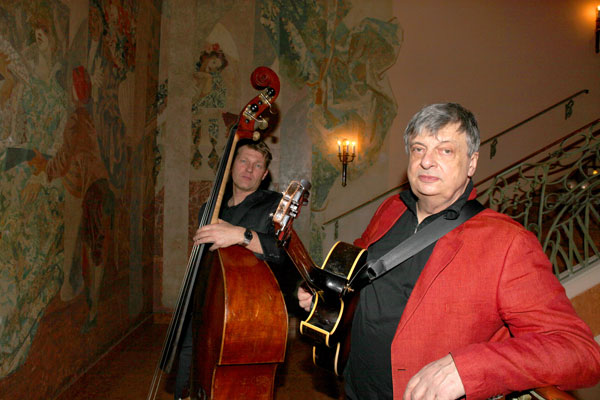 Philip Catherine
has been on the forefront of the European jazz scene since the sixties. His work great artists like Chet Baker, Larry Coryell, Tom Harrell, NHOP, Stéphane Grappelli, Charles Mingus, his unique approach and sound, his dedication to music have been important and influential.
Philip Catherine was born in London in 1942. Being from a musical family (his grandfather was first violin with the London Symphony Orchestra), he developed a musical ear from an early age. He took up the guitar after having discovered Brassens and Django Reinhardt, and started listening to all the great jazzmen of the period. Very soon he had the opportunity to meet some of them, and often accompanied them when they played in Belgium where his family had moved to by then.
At the age of 18 he toured Europe with Lou Bennett and in 1971 Jean-Luc Ponty asked him to join his quintet. In 1971 he made his first record under his name, "Stream", followed in 1974-75 by "September Man" and "Guitars". Jazz amateurs the world over discovered not only a brilliant guitarist, but also a talented composer: themes like "Homecomings" and "Nairam" have become famous.
He has played in the most prestigious concert halls, from the Berlin Philharmonic to the Carnegie Hall, from the Concertgebouw in Amsterdam to the Olympia and Salle Pleyel in Paris and the Palais des Beaux-Arts of Brussels, but still loves to play in jazz clubs from time to time, because of the direct communication with the audience.
Philip Catherine has received many awards, among others the "BIRD" Prize (90), together with Stan Getz, at the North Sea Festival, the "Django D'Or" (98) in Paris for "Best European Jazz Artist", the ZAMU "Lifetime Achievement Award" (2001) and "Best Musician" (2002).
In 2002 he received the title "Maestro Honoris Causa" from the Antwerp Conservatory (title which has been given previous years to reputed artists like Jos van Immerseel, Sigiswald Kuijken and Toots Thielemans).
In 1997 Philip Catherine signed with Dreyfus Records. His first album on this label - simply called "Live" (being the very first live recording of his career) has been highly acclaimed by the international press (4½-star in Down Beat, "best album of the year" in Jazz Nu ; etc..).
It was followed in "98 by " "Guitar Groove" (with Jim Beard on piano and keyboards, Alphonso Johnson on bass and Rodney Holmes on drums), which features twelve superb compositions by Philip and a beautiful rendering of "Stardust". The album got impressive radio airplay in the US and - very exceptional for a European jazz cd - it broke the top 20 of the Gavin Jazz Chart where it stayed for several months.
The Cd "Blue Prince" (nov 2000) received very enthusiastic acclaim from the press: "Record of the Year", in "JazzMan" and was selected among best album of the year in many magazines and newspapers.
"Summer Night" (Dreyfus, 2002) - in trio/quartet with Philippe Aerts on bass, Joost van Schaik on drums, and Bert Joris on trumpet - contains six new compositions, a beautiful re-take of "Janet" and six standards. It shows again that Philip Catherine may be counted among the great jazz artists of our time.
"The success of his appearances with some leading European big bands, and more frequently with chamber orchestra's, have revealed that his lyrical compositions are particularly appropriate for arrangements for larger ensembles.
This lead to the collaboration with the Brussels Jazz Orchestra (BJO, , who were the first european big band to be elected in the 2004 Downbeat Critics Poll), and in april 2005 the album "Meeting Colours" (Dreyfus) was released, with superb arrangements of his music for guitar and big band by trumpet player/arranger Bert Joris.
In 2007 Philip Catherine prepared a new solo guitar program. The beauty of his compositions really stands out in these arrangements. Philip, surrounded by his guitars and his pedal-rack, fascinates his audience. "Guitars Two" (2008, Dreyfus Jazz), the first solo album of his career, was hailed in the international press as one of his best albums.
The album "Live at Cap Breton" (Dreyfus, 4/2010) with an all-star line-up: Enrico Pieranunzi (p), Hein Van de Geyn (b), Joe LaBarbera (dr) received great reviews and the quartet played some beautiful concerts at summer festivals in 2010.
In 2011 The album "Philip Catherine plays Cole Porter" was released on Challenge Records, in quartet with pianist Karel Boehlee, Martijn Vink on drums and Philippe Aerts on double bass. A special tribute to this great composer. In the words of Hein Van de Geyn : "Philip's unique sound is always recognizable, deeply expressive and so very personal. By surrendering to the tune, by simply trying to give the honest rendition of these timeless songs, Philip proved himself to be a great singer." It received among others the CHOC in JazzMan.
Philip Catherine celebrated his 70th birthday in October 2012, with a memorable concert at the Brussels Palais des Beaux-Arts, and the release of a new CD.
"Coté Jardin" (10/2012, Challenge Records) was recorded with his new Quartet: Italian pianist Nicola Andrioli, young fabulous drummer Antoine Pierre and longstanding companion Philippe Aerts on bass, plus additional keyboards by Philippe Decock, and - a première - daughter Isabelle Catherine on vocals in a beautiful version of Philip's composition "Coté Jardin" with lyrics by Jacques Duvall. The repertoire consists of own compositions, some by Andrioli as well as a geat cover of Brassens, and enchants both the jazz fans and the classical music lover.
In January 2014 a new album will be released on ACT Music, a duo recording with the great German bassplayer Martin Wind.
Philip Catherine continues relentlessly and open-minded his search for renewal and perfection. The formulas with which he performs give him the rhythmic support and freedom to unfold his wide palette of musical styles, from that irresistible groovy rock sound to the broad lyrical phrases of which he is a master.