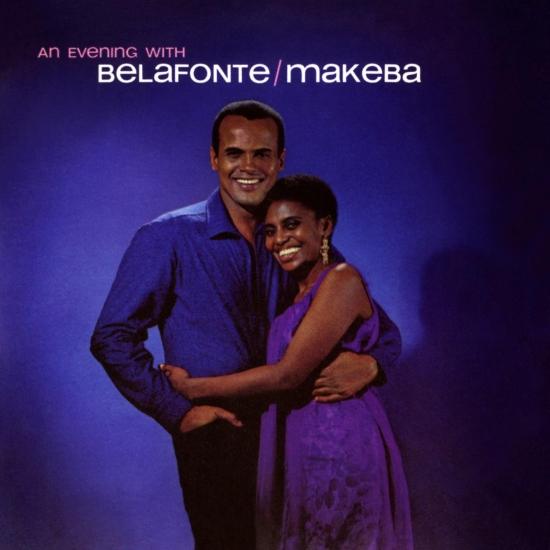 Info for An Evening With Belafonte & Makeba

This 1966 Grammy Award-winning album by two prominent `60s social activists was an opportunity for Harry Belafonte to present the South African singer Miriam Makeba performing a program of double-edged songs, which work not only as tuneful folk pieces but also as protests against her country's inhuman political system. Sung both in English and in various African languages, including the distinctive 'click' of Xhosa, such soothing lullabies as 'Hush, Hush' and 'My Angel' stand in distinct contrast to the upfront challenges of 'Beware, Verwoerd' (Dr. Verwoerd was then South African Prime Minister, and known as the creator of apartheid) and 'Give Us Our Land.'
„Since Harry Belafonte and Miriam Makeba had appeared together in concert frequently in the early '60s, customers spying an LP called An Evening with Belafonte/Makeba might reasonably have assumed that the record would contain a joint live performance by the two, and that might help explain why this album charted in the Top 100 despite its challenging material. To begin with, it is not a live album, but rather a studio recording. And it isn't so much a duo album, for the most part, as a joint album; Belafonte and Makeba perform together on only two tracks, 'Train Song' and 'Cannon.' Otherwise, they split up the selections, each appearing on five. The real point of this album is to present a group of South African songs in more or less authentic fashion. They are sung mostly in either Xhosa or Zulu, with one song in Sotho and another in Swahili. Despite the English song titles (with the original titles following in parenthesis), there is only one moment on the album when the English language is spoken; that is when Makeba explains the meaning of 'Khawuleza' (the Xhosa title of 'Hurry, Mama, Hurry!') as referring to situations in which children alert their mothers that the authorities are coming. Both Belafonte and Makeba are frequently accompanied by a choir for some wonderful effects. This is a powerful album of traditional South African music, and anyone buying it realizing that will be well satisfied. Just don't think the disc is what it appears to be from the title.“ (William Ruhlmann, AMG)
Harry Belafonte, vocals (on tracks 1, 3, 5, 7, 9, 11, 12)
Miriam Makeba, vocals (on tracks 1, 2, 4, 6, 8, 9, 10)
Sam Brown, guitar
Eddie Diehl, guitar
Marvin Falcon, guitar
Ernie Calabria, guitar
Jay Berliner, guitar
William Salter, bass
John Cartwright, bass
Auchee Lee, percussion
Solomon Ilori, percussion
Chief Bey, percussion
Ralph MacDonald, percussion
Percy Brice, percussion
Recorded 1985 at RCA Victor Studio A, New York City, N.Y.
Engineered by Bob Simpson
Produced by Andy Wiswell
Digitally remastered
Please Note: We offer this album in its native sampling rate of 44.1 kHz, 24-bit. The provided 96 kHz version was up-sampled and offers no audible value!