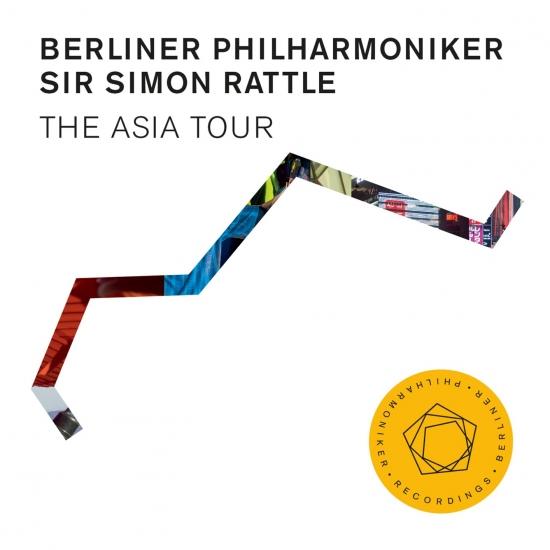 Info for The Asia Tour

Sir Simon Rattle’s last Asia tour as chief conductor of the Berliner Philharmoniker was a triumph, and is documented here in selected audio and video recordings. At the heart of this edition are audio recordings of the two final concerts at the legendary Suntory Hall in Tokyo – the musical and emotional highlight of the tour. “The quality of the orchestra delighted audiences,” said one critic. “It was a virtuoso display of ensemble playing that is simply indescribable.”
The repertoire of the concerts was varied, sonorous and full of musical connections. It included Richard Strauss’ Don Juan and Brahms’ Fourth Symphony, two works of the Berliner Philharmoniker’s core repertoire. In addition, with Don Juan – which was played on the first Japan tour with Karajan – the musicians paid tribute to the now sixty-year partnership with the local audience. Brahms, on the other hand, was a programmatic focus of the Rattle era – as well as Igor Stravinsky, whose Petrushka was performed on this tour. An exciting contrast to Stravinsky was Sergei Rachmaninov: a fellow countryman and contemporary, but personifying a completely different world of expression, as his Third Symphony showed. There were also performances bridging the gap between East and West – the work Chorós Chordón by Korean composer Unsuk Chin and two piano concertos with internationally successful Asian pianists: Maurice Ravel’s G major Concerto with Korea-born Seong-Jin Cho, and Béla Bartók’s Piano Concerto No. 2 with Chinese pianist Yuja Wang.
Seong-Jin Cho, piano
Yuja Wang, piano
Berliner Philharmoniker
Sir Simon Rattle, conductor