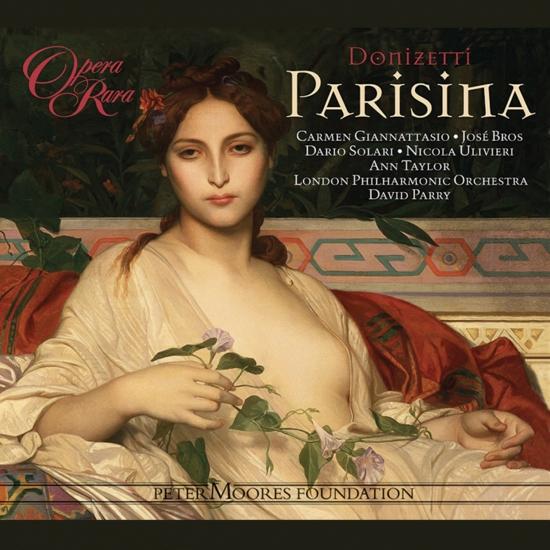 Donizetti’s gripping opera Parisina comes from a particularly fruitful period in the composer’s output. It was premiered in Florence in 1833, the year that Lucrezia Borgia opened at La Scala and Torquato Tasso in Rome, with a libretto by the leading exponent of the craft at that time, Felice Romani. And yet the opera is rarely performed today – even though it was widely staged during the two decades following its premiere. Its fortunes may change again with this new recording, cast from strength and led by the Parisina of Carmen Giannattasio (heard in La donna del lago – ORC34) and José Bros (heard in Roberto Devereux – ORC24) as Ugo. The plot is unusually dark, even for an early romantic melodramma. Parisina, the wife of Azzo, a 15th-century Duke of Ferrara, has fallen in love with Ugo, who turns out to be a child of Azzo’s previous marriage.
In furious anger at her outlandish passion, Azzo has his own son murdered, and presents his anguished stepmother with the corpse. This horrifying scenario was just the sort of passionate narrative to set the composer’s musical pulses racing, and the result remained his favourite among his works for many years; as his biographer William Ashbrook has written, ‘Parisina contains some of Donizetti’s most vivid musical portraiture.’
"Donizetti provides Parisina with one of his most plaintive arias in 'Sogno talor di correre' and a spectacular send off in Act III with 'Ora funesta!'. There's some exquisite orchestra writing… and fine work for the chorus, with the Geoffrey Mitchell Choir on tiptop form here. ...Carmen Giannattasio's... vocal attack is magnificent and the trills and runs and drops through the registers spot on." (BBC Music Magazine)
"Opera Rara's recording is less by Carmen Giannattasio… Her Act 3 defiance of Azzo, the ingenious Romanza in Act 2, and her fatalistic "Forse un destin che intendere" are agile in decoration, expressive and well acted - a cunning piece of casting. The Spanish tenor José Bros displays enough metal in the voice to catch Ugo's Percy-like desperation in returning obsessively to Parisina's hostile court. The horns at Parisina's entrance and the spooky bird-calls in Act 3... show off Donizetti's imaginative use of scoring to second dramatic points. David Parry's well paced conducting is especially aware of these touches." (Gramophone Magazine)
Carmen Giannattasio, soprano (Parisina)
José Bros, tenor (Ugo)
Dario Solari, baritone (Azzo)
Nicola Ulivieri, bass (Ernesto)
Ann Taylor, mezzo (Imelda)
Geoffrey Mitchell Choir
London Philharmonic Orchestra
David Parry, conductor 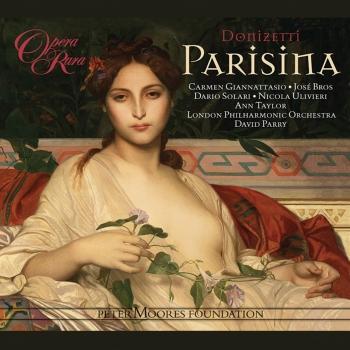