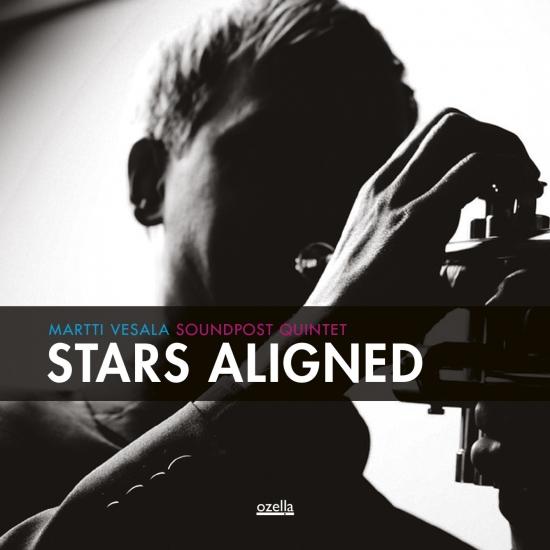 Regardless where trumpet player Martti Vesala may be headed, this is the music that is playing in his head: Classic jazz, melodic without being too easy, funky and yet relaxed, filled to the brim with gripping grooves and ripping solos. It may be music from another era – the 60s and 70s – and its sound may feel worlds apart from the clichés typically associated with Vesala's Finnish home – Nordic melancholia, sad chords, cooly drawn lines. Little wonder, then, that legendary jazz publication Downbeat recently compared him to Miles Davis. And yet, thanks to Vesala's drive, passion and virtuosity Stars Aligned feels perfectly contemporary.
Already Vesala's previous effort Helsinki Soundpost made it clear that the Soundpost Quintet takes priority in Vesala's work. On Stars Aligned, he is again treating the limitations of its purely acoustic line-up as challenges, using them to grow both as a performer and composer. After the debut album featured a subtle and almost chambermusical sound, his latest full- length now turns towards something more epic and majestic. If Vesala's gaze was focused inwards and on his roots on Helsinki Soundpost, it is now turned upwards, outwards, towards the big stages of the world.
The instantly recognisable production of the album, somewhere between vintage and entirely contemporary sound design, was sculpted by star producer Miikka Huttunen, highly respected for a string of successful Finnish releases from pop to jazz. Astoundingly, all eight minutely detailed arrangements of Stars Aligned were taped in a mere three days: The title track with its emotionally ambivalent Leitmotiv and utopian harmonies; experimental study "Murky Green"; and, last but not least, beat-driven pieces like "Driving Force“ or "A Murder of Crows", which, with their casually swinging bass-and-drum-loops, are reminiscent of David Holme's classic soundtrack for blockbuster Ocean's Eleven.
Although the trumpet takes center stage in all of these pieces, Stars Aligned is foremost the triumph of a tightly playing ensemble, which has only recently finetuned its on-stage- communication on a major tour through Finland. For 2018, the rest of the world is now on Vesala's radar. After all, as much as he stands by his Nordic roots, the sound of Stars Aligned is his real home. This is the music that is spinning in his head all day – no matter where he's coming from, regardless where he may be headed.
Martti Vesala, trumpet, fluegelhorn
Petri Puolitaival, tenor saxophone, alto flute
Joonas Haavisto, piano
Juho Kivivuori, double bass
Ville Pynssi, drums, percussion
Recorded at Finnvox Studios, Helsinki December 6th– 8th 2016 by Miikka Huttunen
Mixed by Miikka Huttunen at Neomusic, February 2017
Mastered by Svante Forsbäck at Chartmakers West, March 2017

Martti Vesala
(born 1981 in Jyväskylä, Finland) started his musical activities at an early age. His very first instrument was the piano, which he studied for three years before switching to the trumpet at age 10. Vesala has been composing original music ever since he was 15 years old.
In September 2000, the aspiring trumpeter started his professional musical studies in The Helsinki Metropolia University of Applied Sciences, Degree Programme in Pop and Jazz Music. After graduation in 2006 followed a period of working as a freelance-musician in various projects.
2008 was the year Vesala gained the admission to Sibelius Academy. He studied in the Nordic Master In Jazz -programme (NoMazz), which included studying one semester in The Royal Academy of Music in Aarhus, Denmark and another in The Royal academy of music (Kungliga Musikhögskolan) in Stockholm, Sweden. Vesala concluded his studies in Helsinki, finally earning a Master of Music (M.Mus.) degree in June 2011.
During his year as an exchange student Vesala further deepened his skills as a trumpetist. He studied with some of today's leading jazz-trumpetists: Peter Asplund, Tim Hagans, Magnus Broo, Jacob Buchanan and Karl Olandersson. He also gained valuable experience in composing for large ensembles. His teachers in the art of composition were Kari Heinilä, Jens-Christian Jensen (Denmark) and Ann-Sofi Söderkvist (Sweden).
Currently Martti Vesala is the leader of two Helsinki-based jazz-quintets. Martti Vesala Soundpost Quintet was founded in 2011. The group's music consists entirely of Vesala's compositions, reflecting his long-time admiration of Wayne Shorter's music and the groove of The 1960's Miles Davis Quintet.
In December 2011 the group recorded a set of Vesala's original compositions for Finnish Broadcasting company. The quintet has performed Finland extensively. Martti Vesala Soundpost Quintet's debut album will be released September 2016 on the German label Ozella Music.
During his studies in Metropolia University of Applied Sciences, Vesala founded Maratone Quintet along with four fellow students in 2004. The group participated in the finals of Young Nordic Jazz Comet –jazz ensemble competition in 2006 receiving positive reviews in the media.
In May 2008 Maratone Quintet recorded their debut album Setting Out for finnish label Free Agent Records. The album features five Vesala originals. The Quintet's second album Finding The Way (September 2012 Prophone Records) includes 4 original compositions from Vesala.
Maratone Quintet has performed in several jazz-clubs, concert halls and jazz- festivals. The quintet has appeared at the Dølajazz 2010–festival, organized in Lillehammer, Norway. In 2010, the group represented Finland in the finals of the Getxo International Jazz Group Competition in Spain.
Martti Vesala's first large ensemble composition 'Tuulia' was written for Klüver's Big Band (Aarhus, Denmark) in 2008. The Big Band of The Royal academy of music (Stockholm, Sweden) recorded his original composition' Contemplation' in Spring 2009. A revised version of this composition was comissioned and performed in 2010 by Jyväskylä Big Band. Martti Vesala has been in the finals of the Esko Linnanvalli Big Band composition competition three times: July 2011 with an original composition 'Subconstellation', November 2013 with 'Rhododendron' and May 2015 with 'Piper's Park'.
Martti Vesala works regularly with the groups The Soul Investigators, Aiyekooto And The Afrobeat International, Damn Seagulls and Vesterinen Yhtyeineen. He also performs occasionally in the ranks of UMO Jazz Orchestra, Espoo Big Band, Vantaan Viihdeorkesteri (Vantaa Pops Orchestra), TUMO Orchestra, the Helsinki City Theatre's musicals, and numerous other projects.