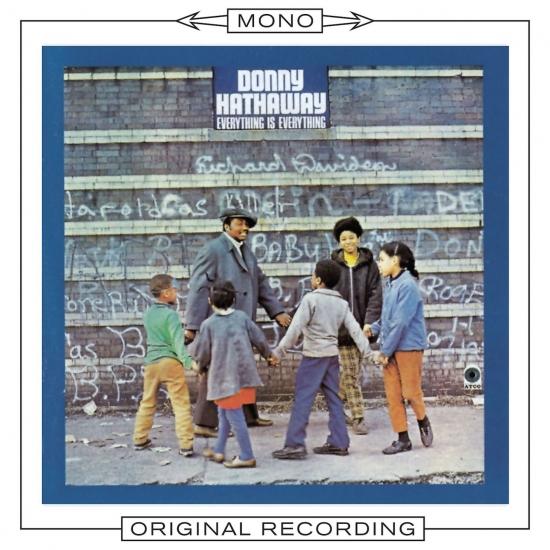 This Mono release comes from a ‘70s R&B legend who’s often remembered as much for the work he did with his recurring duet partner, Roberta Flack, as for the work he did on his own, but this particular album was all his.
Originally released on Atco on July 1, 1970, Everything is Everything was Donny Hathaway’s debut solo album, but it was hardly his first foray into music, having started his career as a gospel singer (under the name “Donny Pitts”) before moving to Chicago and eventually pulling a job for Curtis Mayfield’s Curtom Records, serving variously as an arranger, composer, conductor, producer, session player, and songwriter.
Everything is Everything may be best remembered for its hit single, “The Ghetto,” which Hathaway co-wrote with Leroy Hutson of the Impressions, along with “Tryin’ Times” and – with the assistance of Edward Kennedy – “Je Vous Aime (I Love You).” Other songs on the album include covers of Ray Charles’ “I Believe to My Soul,” Nina Simone’s “To Be Young, Gifted and Black,” and “Misty,” written by Johnny Burke and Erroll Garner, along two other songs penned by Hathaway: “Sugar Lee,” which he co-wrote with Ric Powell, and “Thank You Master (For My Soul),” a solo composition.
Some have argued that Everything is Everything was, in fact, the best solo album Hathaway ever released, but now you can make that decision for yourself.
Donny Hathaway, vocals, piano, electric piano, bass, organ, Fender piano bass
Philip Upchurch, guitar, bass
King Curtis, guitar
Clifford Davis, alto saxophone
Donald Myrick, alto saxophone
Johnny Board, tenor saxophone
Lenard S. Druss, tenor saxophone
Willie Henderson, baritone saxophone
Oscar Brashear, trumpet
John E. Howell, trumpet
Robert A. Lewis, trumpet
Gary Slavo, trumpet
Cyril Touff, bass trumpet
John Lounsberry, French horn
Ethel Merkerl, French horn
Paul A. Teryett, French horn
John Avant, trombone
Morris Ellis, trombone
Aaron Dodd, tuba
Louis Satterfield, bass
Marshall Hawkins, bass
Morris Jennings, drums
Ric Powell, percussion, drums
Henry Gibson, conga
Vashonettes, background vocals
Recorded at Mayfair Studio and Audio Finishers, New York, New York between May 9, 1969 and April 16, 1970
Digitally remastered 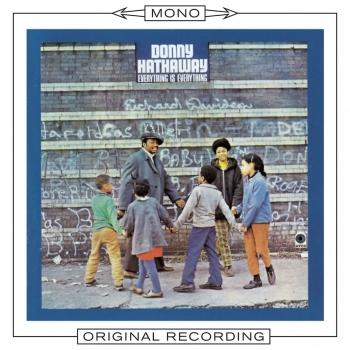 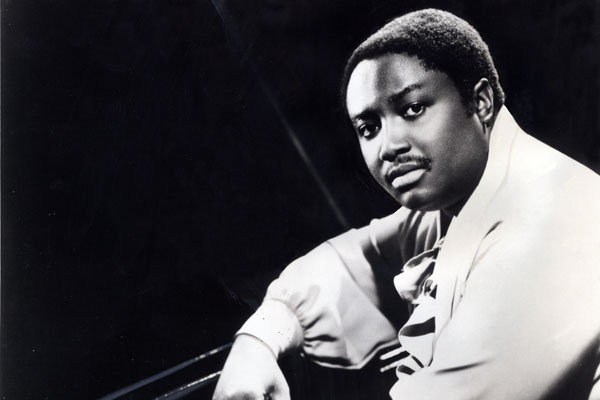 Donny Hathaway
is perhaps one of the greatest singers most people know nothing about. He ranks right up there with his contemporaries of the time, Marvin Gaye, Al Green and even Stevie Wonder, but due to his short recording career and tragic death, he has been largely ignored and undiscovered by the public.
If they’re cruising down the radio dial, maybe they’ll stumble past “The Closer I Get To You” or “Where Is the Love,” two of his duets with Roberta Flack. During the holidays they may even be strolling through one of the hipper malls and Hathaway’s classic, “This Christmas” is being piped through the sound system. They may even know Donny’s daughter, Lalah Hathaway has enjoyed some success as a vocalist. Unfortunately, for far too many that’s where their knowledge of Hathaway ends.
When my father brought Everything Is Everything home and started playing it, Hathaway’s voice grabbed me first and then how brilliantly a song like “The Ghetto” took me along with him on a trip through some pretty mean streets. “The Ghetto” should be the flip side of Marvin Gaye’s “What’s Going On?” Both capture the frustrations and to a lesser extent, the pleasures of life on the edges of polite society.
Hathaway was both blessed and cursed. Blessed with a rich and expressive voice that poured out deep, heartfelt, soulful sentiments that could deliver soul, blues or gospel. Hathaway was a gifted songwriter and pianist as well. The curse was he suffered from depression and debilitating mental illness that required hospitalization. This is in part why Hathaway’s discography is limited to three studio albums and a pair of live recordings. The best starting point for anyone curious about this immensely talented, but troubled artist is the 1990 compilation, A Donny Hathaway Collection from Atlantic Records.
I have serious problems with this compilation, but it’s a good enough starting point before diving into Hathaway’s solo recordings. I agree with All Music Guide that Everything Is Everything and Extensions of A Man are his best work. The go-to place for his duets with Roberta Flack is The Very Best of Roberta Flack, but after 22 years, Hathaway is long overdue for a better anthology of his music. There is a four-disc import from France, Someday We’ll Be Free, that is pretty exhaustive, but is still missing the music from his collaboration with Quincy Jones for the movie soundtrack, Come Back, Charleston Blue. It’s probably as good as it gets for the committed collector like me, but it’s far too much for the casual listener. Time for someone at Atlantic to step up their game and put together a better introduction to the greatness of Donny Hathaway.