Beam Me Up Shauli Einav Quartet 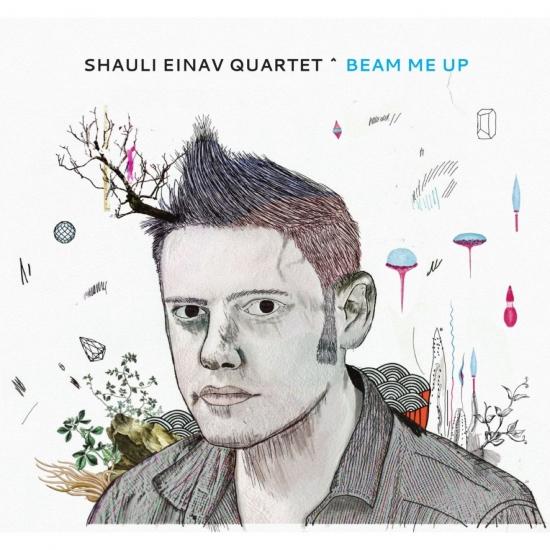 Info for Beam Me Up

“I always had a good feeling about the saxophone”, explains Shauli Einav. “I liked the shape of it; much cooler than a violin or something like that - like a machine. It didn’t seem too complicated at first, so I stuck with it.” Still at school in Israel, Shauli would go to Jazz festivals with his older brother and sister during the summer vacations. He bought an album by the saxophonist George Coleman, in a record store in Tel Aviv, before one of the festivals; then discovered Charlie Parker and never looked back.
Israel has a strong tradition of music education, which has laid the foundation for an impressive wave of Jazz musicians to which Shauli Einav now very firmly belongs. “I was playing and playing at boarding school, as much as I could and at some point, in 1998, I went to a music camp with a lot of other talented young musicians.”
After the camp he met the Brooklyn born Jazz saxophonist Arnie Lawrence Finkelstein who had come to Israel a year earlier. Arnie Lawrence, as he was known, had worked a double bill, opening for John Coltrane and played with such greats as Charles Mingus. For Shauli, Arnie Lawrence was, “… a visionary person. He wanted to bring peace between the people, through music. Arab musicians and Jewish musicians would play together. Arnie was really the link between New York and Jerusalem, for me and for many, many young musicians. Almost all of the successful Israeli musicians today, had some connection with Arnie.”
Shauli Einav finished his first degree in Israel, but as with so many Israeli Jazz musicians continued his studies in the United States, in Shauli’s case in Rochester, upstate New York, but would take every opportunity to go to concerts in New York City where he later lived.
“In the first two years that I was in New York, I went constantly every night to the jam-sessions to hear, to listen and to throw myself into the water - even without practising. Just being among those great musicians and having direct contact, talking, hearing, was an invaluable experience.” On the question of why so many Israelis have been successful in the New York Jazz scene, Shauli explains: “Israelis tend to be very passionate and try to excel in everything that they do, to a level that I’m not sure is healthy but this is how it is.”
Shauli EInav, tenor & soprano saxophone
Paul Lay, piano, Fender Rhodes
Florent Nisse, double bass
Gautier Garrigue, drums
Pierre Durant, guitar 76 San Gabriel

Shauli Einav
was described as a "remarkably complete musician, a virtuosic soloist with a lush sound on both soprano and tenor whose compositions are daring and deep" (All About Jazz) and his album “Opus One” (Plus Loin Music) was reviewed as a "Smartly played, swinging and evocative jazz album” (DownBeat Magazine). Einav recently relocated to Paris after 7 fruitful years in the vibrant jazz scene of NYC, there he played with some of today’s leading jazz figures as: Aaron Goldberg, Avishai Cohen, Don Friedman, Eliot Zigmund, Omer Avital, Johnathan Blake, Shai Maestro, Walt Weiskopf, Frank Gambale, Dave Liebman & Gilad Hekselman. Einav has performed with his ensembles on important stages such as: Duc des Lombards, Sudtirol Jazzfest, Rochester Jazz festival, Swing Hall Tokyo, Bohemia Jazz festival, Venice Jazz Festival, Red Sea Jazz festival, Enjoy Jazz festival, Smalls, Kitano, The Knitting Factory, Unterfahrt among many others. Born 1982 in the countryside of Israel and started playing the violin at the age of 4, at 13 he switched to the saxophone and started playing with many Jerusalem and Tel-Aviv based bands. In 1998 Einav was discovered by the legendary American saxophonist Arnie Lawrence who came to Israel in order to bring peace between Jews and Arabs through music. Mr Lawrence who himself was mentored by Ben Webster was the linking piece between Jerusalem & Tel Aviv musicians to NYC’s Jazz heritage. Einav later on completed his BA in the Jerusalem Academy and earned his Master’s degree at the prestigious Eastman School of Music, Rochester NY.