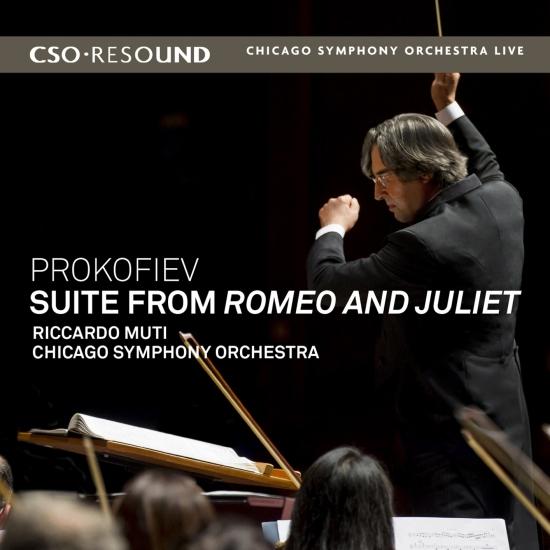 Prokofiev: Suite from Romeo and Juliet features a 10-movement suite from the famous Shakespeare-inspired ballet. These ten movements were selected by Riccardo Muti from two other orchestral suites of seven movements each that Prokofiev created, and their chronology closely follows the storyline of the ballet and tragedy.
Prokofiev led the CSO in 1937 in the first American performances of excerpts of this music to his still-unstaged ballet; since then the CSO has performed the work countless times. Muti has led the CSO in this work to great acclaim both in Chicago in 2011 and 2013, and on two European tours, in 2011 and again earlier this year.
Recorded in October 2013 at Orchestra Hall, the album was produced by David Frost, a Grammy Award winner, and engineered by Tim Martyn, Charlie Post and Shawn Murphy. At the 2013 Grammy Awards, Frost was named Producer of the Year, Classical, and he and Martyn together won Best Engineered Album, Classical.
“Muti’s lofty yet urgent style results in an imposing set of formal dances at the Capulets’ ball, and some thrilling street brawls between the rival Veronese families. His deliberate, grand-manner way with the love scenes won’t be to everyone’s taste, though. The playing is formidable and the sound state of the art.” (The Guardian)
Chicago Symphony Orchestra
Riccardo Muti, conductor
Recorded live in Orchestra Hall at Symphony Center, October 3, 5, 8 and 11, 2013
Engineered by Tim Martyn, Charlie Post, Shawn Murphy
Mixed by David Frost, Tim Martyn
Editing by David Frost
Mastering by Tim Martyn, Silas Brown
Produced by David Frost Recording

CHIC are one of the superpowers of late-’70s disco, a mixed-gender band from New York City that provided some of the biggest and most enduring hits of the Studio 54 era.
Best know for: A pair of epochal #1 pop smashes in “Le Freak” and “Good Times,” as well as club classics like “I Want Your Love,” “Everybody Dance” and “Dance, Dance, Dance (Yowsah, Yowsah, Yowsah).” “Good Times” in particular has provided one of the great through-threads of the last 30 years of pop music, with its legendary bass line appearing (in various incarnations) in pop songs ranging from Queen’s “Another One Bites the Dust” to Daft Punk’s “Around the World”—and, most notably, providing the hook for Sugarhill Gang’s “Rappers’ Delight,” the song that brought hip-hop to the masses.
In addition to the irrepressible “Good Times,” Chic have made their influence felt through the production and songwriting work that group masterminds Nile Rodgers and Bernard Edwards did for other artists of their era, including Sister Sledge (“We Are Family”) and Sheila B. and Devotion (“Spacer”), as well as established artists looking to get on the disco bandwagon like Diana Ross (“Upside Down”) and David Bowie (“Let’s Dance”) and some of the biggest artists from next generation of pop, like Madonna (“Like a Virgin”) and Duran Duran (“A View to a Kill”). Oh, and French dance artist Modjo sampled their “Soup For One” for their 2001 hit “Lady (Hear Me Tonight),” which is pretty cool.