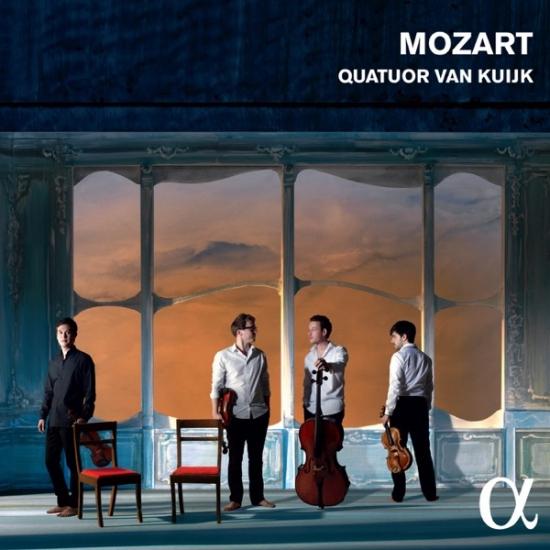 Despite its Dutch-sounding name, the quartet founded by Nicolas Van Kuijk in 2012 is French. But its short career is already international. The Quatuor Van Kuijk won First Prize in the 2015 Wigmore Hall Competition and First Prize and Audience Award at the Trondheim Interna- tional Chamber Competition, and its members have been named BBC New Generation Artists until 2017. It has also been distinguished by the Academy of the Festival d’Aix- en-Provence, and it is in the framework of the latter’s partnership with Alpha Classics that it has recorded this program. Mozart is obviously the ideal composer to forge a link between chamber music and opera, the raison d’être of the Aix Festival. This program combines an impish divertimento by the youthful Mozart of 1772 with two mature quartets composed around 1782, including the famous ‘Dissonance’ Quartet with its eminently dramatic opening. Nowhere else in Mozart’s quartets do theatre and counterpoint form such a happy pairing.
Praised by The Guardian for its ‘style, energy, and a sense of risk’, the QVK is one of the most promising chamber groups of the new generation and continues his lighting rise joining ECHO Rising star’s artists for 2017-2018 season.
Van Kuijk Quartet:
Nicolas Van Kuijk, first violin
Sylvain Favre-Bulle, second violin
Grégoire Vecchioni, viola
François Robin, cello 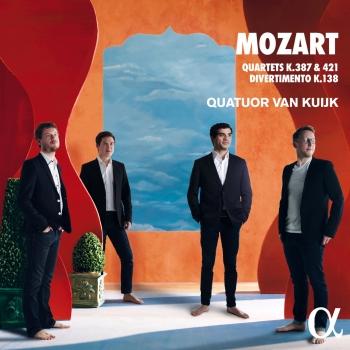 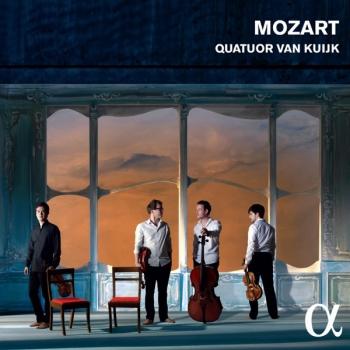 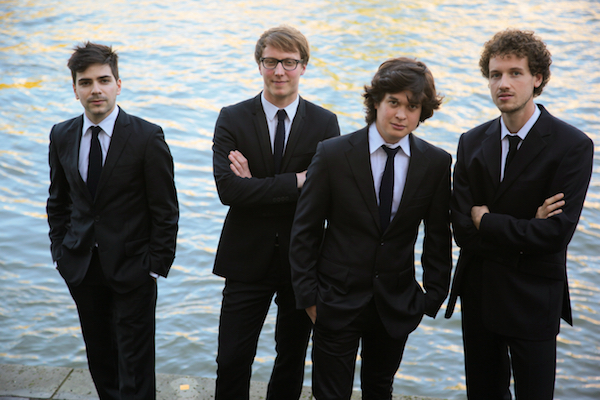 Van Kuijk Quartet
Founded in 2012, in Paris, the Van Kuijk Quartet recently won the 2015 Wigmore Hall String Quartet Competition, along with the associated Best Beethoven and Best Haydn prizes.
In the few years since the quartet first formed, they have found success throughout Europe: as well as triumphing at the Wigmore Hall, the quartet won the 1st Prize and Audience Award at the Trondheim International Chamber Music Competition, in Norway, and are also laureates of the Aix-en-Provence Festival Academy and the FNAPEC Ensembles Music Competition, both in France.
The Van Kuijk Quartet is in residence at Proquartet, Paris, where they study with members of the Alban Berg, Artemis and Hagen quartets. Having taken their first steps as students of the Ysaye Quartet, the young musicians now study with Günter Pichler at the Escuela Superior de Mùsica Reina Sofia in Madrid; their studies take place thanks to the generous support of the International Institute of Chamber Music of Madrid.
The quartet also participates in various academies; they have taken part in the McGill International String Quartet Academy (Montreal) with Michael Tree of the Guarneri Quartet and André Roy ; the 58th Weikersheim International Chamber Music Academy with the Vogler Quartet and Heime Müller, formerly of the Artemis Quartet; and others academies in Aix-en-Provence and Verbier.
An established presence in major international venues, the Van Kuijk Quartet has performed at the Salle Gaveau in Paris, the Wigmore Hall in London, and at festivals in Heidelberg, Verbier, Aix-en Provence and Stavanger. This summer, they will take part in the Tivoli Concert Series in Denmark and the Lockenhaus Chamber Music Festival in Austria.