On February 26, the venerated multi-instrumentalist and composer Joe Chambers will release Samba de Maracatu, a notable Blue Note Records return for a significant figure in the label’s history. The album’s Brazilian flavored title track “Samba de Maracatu,” which is available today to stream or download, was composed by Chambers and features him performing drums, vibraphone, and percussion with Brad Merritt on keyboards and Steve Haines on bass. The album is a nine-song set of original compositions, standards, and pieces by Wayne Shorter, Bobby Hutcherson, and Horace Silver.
In the mid-to-late 1960s, Chambers played drums for numerous Blue Note luminaries appearing on some of the decade’s most progressive albums including Shorter’s Adam’s Apple and Etcetera, Hutcherson’s Components and Happenings, Freddie Hubbard’s Breaking Point, Joe Henderson’s Mode for Joe, Sam Rivers’ Contours, Andrew Hill’s Andrew!!!, Donald Byrd’s Fancy Free, and many more.
The label’s owners – Alfred Lion and Francis Wolff – offered Chambers a chance to record his own album for the imprint during that fertile period, but he was riding so high on recording and touring with so many jazz greats that he declined the opportunity. Chambers eventually did release his own Blue Note debut Mirrors in 1998 featuring trumpeter Eddie Henderson, saxophonist Vincent Herring, pianist Mulgrew Miller, and bassist Ira Coleman.
On Samba de Maracatu, Chambers asserts himself more as a mallet player, particularly on the vibraphone. Throughout the album, he uses the vibraphone as the lead melodic and improvisational voice that often converses with Merritt’s piano accompaniments and solos. While Samba de Maracatu isn’t a Brazilian jazz album in this strictest sense, Chambers utilizes various rhythms and indigenous Brazilian percussion instruments on several pieces, including the title track, which references the syncretic Afro-Brazil rhythms that were originated in the north-east region of Brazil.
"Chambers demonstrates an affinity with hip hop on the penultimate track, "New York State Of Mind Rain," a mash-up of Nas' 1994 hit "N.Y. State Of Mind," which sampled portions of Chambers' "Mind Rain" (taken from his 1978 Muse album, Double Exposure). Parrain's lyrics link the two songs over a beat which fluctuates between in-the-tradition jazz swing and hip-hot backbeat. You are, truly, as young as you feel." (AllAboutJazz)
Brad Merritt, piano, synthesizer
Steve Haines, bass, acoustic
Stephanie Jordan, voice, vocals
MC Parrain, voice, vocals 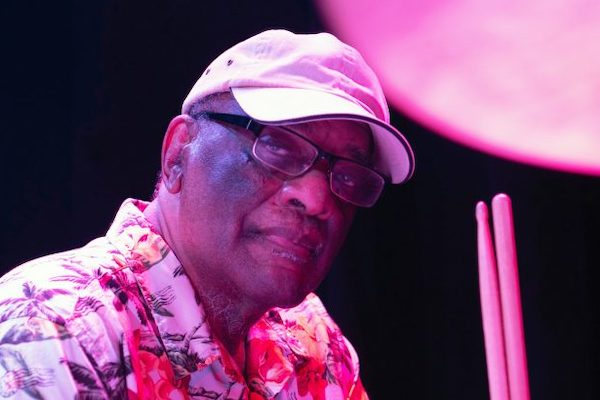 Joe Chambers
is an extremely versatile and tasteful master of all post-bop idioms. Chambers drives an ensemble with a light hand; his time is excellent and his grasp of dynamics superb. He’s not a flashy drummer by any means, but he’s a generous collaborator who makes any group of which he’s a part as good as it can possibly be. Chambers worked around Washington, D.C., in his late teens. After moving to New York in 1963, he played with Eric Dolphy, Freddie Hubbard, Jimmy Giuffre, and Andrew Hill. In the mid-’60s, Chambers played with a number of the more progressively inclined musicians associated with the Blue Note label, such as vibist Bobby Hutcherson and saxophonists Joe Henderson, Wayne Shorter, and Sam Rivers.
In 1970, Chambers joined Max Roach’s percussion ensemble, M’Boom, as an original member. During the ’70s, Chambers played with a great many of jazz’s most prominent elder statesmen, including Sonny Rollins, Tommy Flanagan, Charles Mingus, and Art Farmer. With Flanagan and bassist Reggie Workman, Chambers formed the Super Jazz Trio. In the late ’70s, he co-led a band with organist Larry Young. Chambers recorded with bands led by trumpeter Chet Baker and percussionist Ray Mantilla in the early ’80s. He also maintained his association with Roach into the ’90s.
The AlmoravidAs a solo artist, Chambers has released a tidy number of albums including Almoravid (1973) with trumpeter Woody Shaw, New World (1976), New York Concerto (1981), Phantom of the City (1992), Mirrors (1998), and Urban Grooves (2002). Beginning with 2006’s Outlaw, Chambers released a steady stream of albums for Savant Records with Horace to Max (2010), Joe Chambers Moving Pictures Orchestra (2012), and Landscapes (2016), featuring bassist Ira Coleman and pianist Rick Germanson.