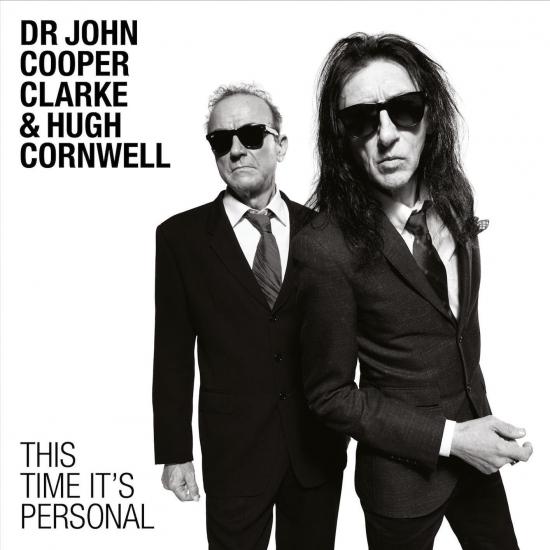 Info for This Time It's Personal

The coming together of two influential gents within their own fields of the arts. Acclaimed poet Dr John Cooper Clarke and esteemed singer / songwriter (and founding member of The Stranglers) Hugh Cornwell have teamed up to release their first album, 'This Time It's Personal'. It's a match made in the rock 'n' roll heaven of their respective youth and, just as their eyebrow-raising new album says, 'This Time It's Personal'. Featuring classic tracks that they both grew up listening to, the album is the surprising duo's first collaboration. The fact that these two giants of punk and new wave are together on record for the first time is remarkable enough. But the album, which features ten hand-picked songs reflecting the pair's shared love of classic American and British pop they grew up with, has a knockout punchline. With not a spoken word in sight by Dr Clarke, nor a distinctive growling Cornwell vocal, 'This Time It's Personal' (produced by Hugh at his own studio) announces John's debut, at the age of 67, as a lead vocalist, with Hugh playing all guitars. The results are delightful.

Dr. John (Malcolm Rebennack)
The legendary Dr. John is a six-time Grammy Award-winning musician and Rock & Roll Hall of Fame inductee. Known throughout the world as the embodiment of New Orleans’ musical legacy, Dr. John is a true icon in American culture. His colorful musical career began in the 1950s when he wrote and played guitar on some of the greatest records to come out of the Crescent City, including recordings by Professor Longhair, Art Neville, Joe Tex and Frankie Ford.
Dr. John headed west in the 1960s, where he continued to be in demand as a session musician, playing on records by Sonny and Cher, Van Morrison, Aretha Franklin and The Rolling Stones' “Exile On Main St.” During that time he launched his solo career, developing the charismatic persona of Dr. John The Nite Tripper. A legend was born with his breakthrough 1968 album “Gris-Gris,” which introduced to the world his unique blend of voodoo mysticism, funk, rhythm & blues, psychedelic rock and Creole roots. Several of his many career highlights include the masterful album “Sun, Moon and Herbs” in 1971 which included cameos from Eric Clapton and Mick Jagger and 1973’s “In The Right Place,” which contained the chart hits “Right Place Wrong Time” and “Such A Night.”
In addition to his six Grammy wins (1989, 1992, 1996, 2000, 2008 and 2013), he has received six other Grammy nominations over the years. In 2007 he was nominated for “Sippiana Hericane,” his Hurricane Katrina benefit disc. After Hurricane Katrina Dr. John immediately stepped up to the plate with generous relief fund-raising concerts and recordings. In 2007 he was also inducted into the Louisiana Music Hall of Fame and the Blues Hall of Fame. In 2008 he released “City That Care Forgot,” winning him a Grammy for Best Contemporary Blues Album. His latest album 'Locked Down', released in 2012 with Dan Auerbach of The Black Keys also won a Grammy for Best Contemporary Blues Album.
In 2013 Dr. John was awarded an honorary doctorate from Tulane University alongside His Holiness the Dalai Lama. Dr. John is currently hard at work completing an album in tribute to Louis Armstrong which is scheduled to be released in July of this year. After a half century of creating music for others and himself, Dr. John continues to write, arrange, produce and interpret with a passion that has yet to wane.

Booklet for This Time It's Personal