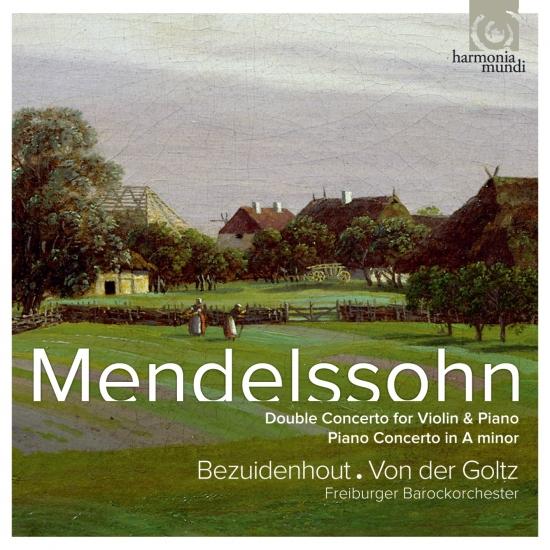 Three years before the Midsummer Night’s Dream Overture, Felix Mendelssohn wrote this amazing Concerto for (forte)piano and violin, built on the Classical model but brimming with new, even iconoclastic ideas. And yet, when it had its first performance in May 1823, the composer was aged just 14! By then he had already written around 100 works, including a Piano Concerto premiered a year earlier. It was not until the late 20th century that they appeared in a critical edition, on which this recording is based.
Kristian Bezuidenhout first gained international recognition at the age of 21, after winning the prestigious first prize as well as the audience prize in the Bruges Fortepiano Competition. He has fully explored early keyboards, studying harpsichord with Arthur Haas, fortepiano with Malcolm Bilson and continuo playing and performance practice with Paul O’Dette. Bezuidenhout is a frequent guest artist with the Freiburger Barockorchester, the Orchestre des Champs-Élysées, The Orchestra of the 18th Century, Les Arts Florissants, Concerto Köln and The Chamber Orchestra of Europe, in many instances assuming the role of guest director.
Bezuidenhout now divides his time between concerto, recital and chamber-music engagements, appearing in the early-music festivals of Barcelona, Boston, Bruges, Innsbruck, St. Petersburg, Venice and Utrecht, as well as the Saintes Festival, La Roque d’Anthéron, the Chopin Festival Warsaw, the Tanglewood Festival and Mostly Mozart Lincoln Center, and at many of the world’s most important concert halls including those of Amsterdam, Berlin, Cologne, London, Vienna, Tokyo, Paris, Boston and New York.
He is a guest professor at the Schola Cantorum (Basel) and the Eastman School of Music (Rochester, Ney York); in 2007 he was awarded the Erwin Bodky Prize and the Deutschlandfunk Förderpreis. Kristian Bezuidenhout is Artistic Advisor for the Constellation Center, Cambridge, Massachusetts.
"There is verve and spirit in these performances, but only where the composer demands it...In both concertos the Freiburg Baroque Orchestra brings out all that is new and innovative in these immature works. This is a 'must' if you love Mendelssohn and want to hear his early works given a polished, characterful performance" (Classic FM Magazine)
"Gottfried von der Goltz's solos are full of the swells we're accustomed to hearing in earlier music, rounded off with a hint of easy portamento, but his short-breathed phrasing and vigorous spiccato don't feel like concerto playing...Questions of style don't arise with Kristian Bezuidenhout, such is the weight of sonority he draws from this fortepiano (a modern copy of a Graf), his fine touch and taste...Do try to hear this." (Gramophone Magazine)
Kristian Bezuidenhout, fortepiano
Gottfried von der Goltz, violin, direction
Freiburger Barockorchester 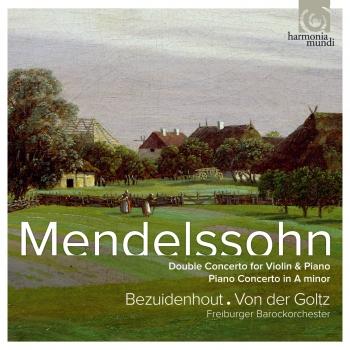 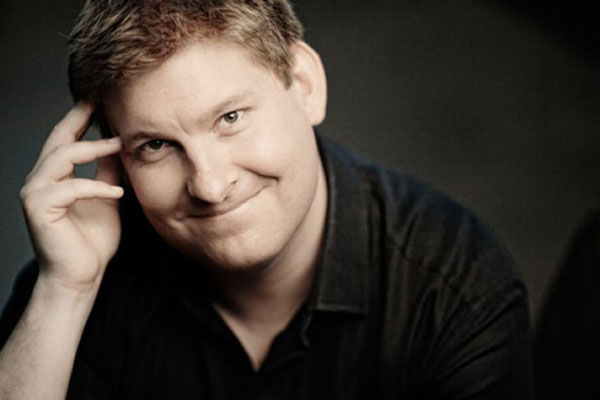 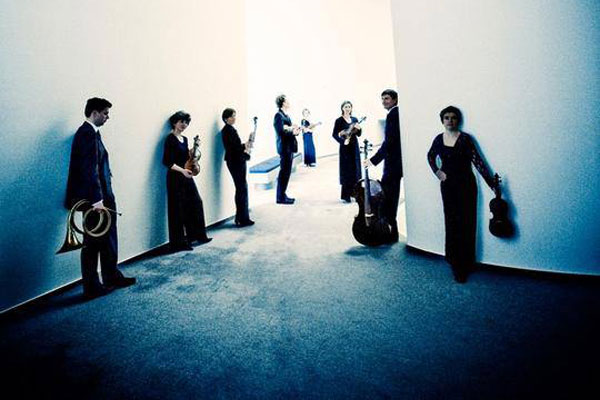 Kristian Bezuidenhout
is one of today’s most notable and exciting keyboard artists, equally at home on the fortepiano, harpsichord, and modern piano. Born in South Africa in 1979, he began his studies in Australia, completed them at the Eastman School of Music, and now lives in London. After initial training as a pianist with Rebecca Penneys, he explored early keyboards, studying harpsichord with Arthur Haas, fortepiano with Malcolm Bilson, and continuo playing and performance practice with Paul O’Dette. Kristian first gained international recognition at the age of 21 after winning the prestigious first prize, and audience prize in the Bruges Fortepiano Competition.
Kristian is a regular guest with the world’s leading ensembles including the Freiburger Barockorchester, Les Arts Florissants, Orchestra of the Age of Enlightenment, Orchestre des Champs Elysées, Koninklijk Concertgebouworkest, Chicago Symphony Orchestra & the Leipzig Gewandhausorchester; and has guest-directed (from the keyboard) the English Concert, Orchestra of the Eighteenth Century, Tafelmusik, Collegium Vocale, Juilliard 415 and the Kammerakademie Potsdam, & Dunedin Consort (Bach St. Matthew Passion).
He has performed with celebrated artists including John Eliot Gardiner, Philippe Herreweghe, Frans Brüggen, Trevor Pinnock, Giovanni Antonini, Jean-Guihen Queyras, Isabelle Faust, Alina Ibragimova, Rachel Podger, Carolyn Sampson, Anne Sofie von Otter, Mark Padmore & Matthias Goerne.
Kristian's rich and award-winning discography on Harmonia Mundi includes the complete keyboard music of Mozart (Diapason d’Or de L’année, Preis der Deutschen Schallplattenkritik, & Caecilia Prize); Mozart Violin Sonatas with Petra Müllejans; Mendelssohn and Mozart Piano Concertos with the Freiburger Barockorchester (ECHO Klassik); Beethoven, & Mozart Lieder, and Schumann Dichterliebe with Mark Padmore (Edison Award). In 2013 he was nominated as Gramophone Magazine’s Artist of the Year. Recent releases include Volume 2 of Mozart Piano Concertos with the Freiburger Barockorchester.
In the 2017/18 season, Kristian becomes an Artistic Director of the Freiburger Barockorchester and Principal Guest Conductor with the English Concert. He play-directs programmes with both orchestras and also with Camerata Salzburg, Tafelmusik Baroque Orchestra and Zürcher Kammerorchester . As a soloist he performs with Orchestre des Champs Elysees/Herreweghe, Les Violons du Roy/Cohen and Le Concert Olympique/Caeyers. Solo recitals and chamber music take him to London, Rome, Amsterdam, Stuttgart, Munich, Cologne, Berlin, USA and Japan.
The Freiburg Baroque Orchestra
can look back on a success story lasting over twenty years and is a popular guest at the most important concert halls and opera houses. A glance at the ensemble’s concert calendar shows a diverse repertoire played at a variety of venues, ranging from the Baroque to the musical present and from Freiburg to the Far East.
The Freiburgers’ artistic credo, however, remains unchanged: the creative curiosity of each of them, with the intention of playing a composition in as lively and as expressive a manner as possible. This also involves their own members playing demanding solo concerts. Cultivated and simultaneously rousing ensemble playing has thus become an international trade mark: “The Freiburg Baroque Orchestra is a diamond of particular brilliance. In the technical and mental ‘mastery’ of the instruments and the individual parts one sees what ‘historical’ music-making is currently capable of. Vivid and pure, transparent and lucid, delicate in phrasing and articulation and without excessive pathetic pressure, one hears all the details and experiences the whole as a musical cosmos of overpowering richness. Open your ears, this is how music sounds!” (Salzburger Nachrichten)
The FBO continuously collaborates with important artists such as René Jacobs, Pablo-Heras Casado, Philip Jaroussky, Andreas Staier and Thomas Quasthoff, and has a close alliance with the French label harmonia mundi France. The artistic success of this musical partnership is expressed in numerous CD productions and the receipt of prominent awards, such as the ECHO Classical German Music Prize 2014, 2013, 2012, 2011 and 2007, the Gramophone Award 2011, the Jahrespreis der Deutschen Schallplattenkritik 2009, the Edison Classical Music Award 2008, or the Classical Brit Award 2007.
Under the artistic directorship of its two concertmasters Gottfried von der Goltz and Petra Müllejans, and under the baton of selected conductors, the FBO presents itself with about one hundred performances per year in a variety of formations from chamber to opera orchestra: a self-administrated ensemble with its own subscription concerts at Freiburg’s Concert Hall, Stuttgart’s Liederhalle, and Berlin’s Philharmonie and with tours all over the world.