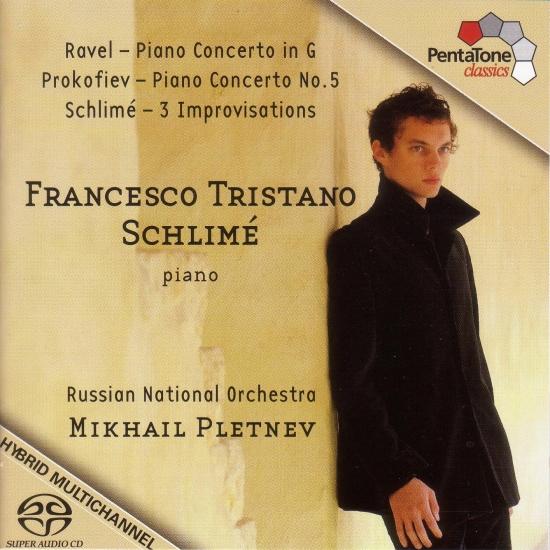 Young Luxembourg-born virtuoso Francesco Tristano Schlimé is in no rush in either of the two piano concertos here, considerably stretching tempos beyond the norms in almost every movement. He is abetted by an equally laid-back Mikhail Pletnev, himself a virtuoso pianist of the first rank. Pletnev draws fine playing from his Russian National Orchestra, the music in general sounding supple and relaxed, with the edges sanded smooth and the attacks less potent.
The first movement of the Ravel comes across best, with its bluesy Gershwinian character having a mesmerizing dreaminess and the jazzy rhythms given sufficient sparkle by the soloist and orchestra to yield an enchanting blend. But the overly deliberate tempo set by Schlimé at the outset of the second movement imparts a ponderous pall that sabotages much of the lovely main theme's charm. The finale, with its mischievous pranks and playful character, fares a bit better, but again Schlimé and company hold the reins back a bit too much.
The five-movement Prokofiev Fifth, with its lively, odd-numbered movements and slower, even-numbered ones, needs more spirit in the outer movements and crucial central toccata, as well as less ponderousness in the long, dark fourth movement. Still, Schlimé's playing is virtuosic and multi-hued, especially in the angular, jumpy first movement, and the orchestra is more than competent throughout. Argerich in the Ravel and Richter and Ashkenazy in the Prokofiev would be preferable alternatives to this decent but somewhat reticent offering.
Schlimé's own composition, 3 Improvisations, closes out the disc. The work, containing vague thematic and harmonic reminiscences of the two concertos, may appeal to those with an interest in Messiaen and modern jazz. The sound throughout the disc is clear, but slightly distant and low-level. (Robert Cummings, AMG)
A shining new talent forces you to listen to these concertos anew… Here is music making to wonder at. Rarely can the two concertos have been performed with such meticulous care and affection….PentaTone’s sound and balance are exemplary and I can scarcely wait to hear such a sensitive, personal and meticulous young pianist in the widest possible repertoire.” (Gramophone)
“Schlimé brings flair, care and imagination, matched by the crisp, translucent playing of the Russian National Orchestra conducted by one of his mentors, Mikhail Pletnev.” (Geoffrey Norris, Telegraph, UK)
Francesco Schlime, piano
Russian National Orchestra
Mikhail Pletnev, conductor 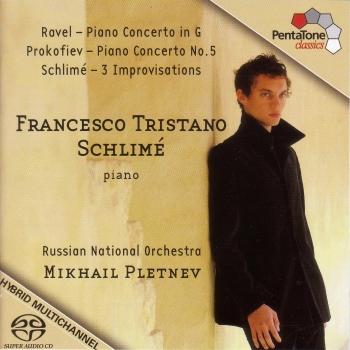 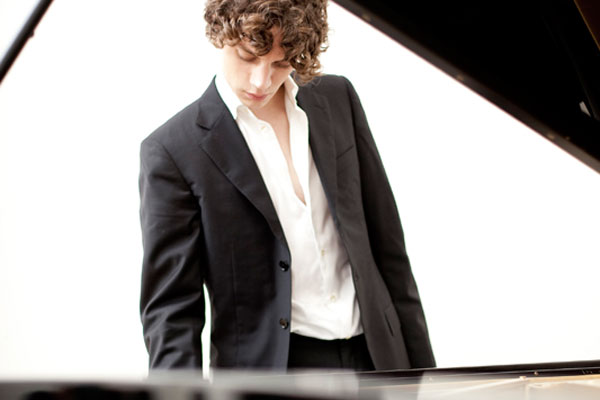 Francesco Schlime
A young musician and composer causing a stir on the club scene as well as in classical concert venues is probably a world-first. It may also be the first time that purists from the classical and techno camps actually agree on something – That they don’t know quite what to make of this young musician who refuses to stick to the rules. For Francesco Tristano this kind of reaction is nothing new. Experienced concert audiences and classical music lovers may feel equally baffled when they hear a pianist blend and mix his own composition – just like a DJ – into a piece by baroque composer Girolamo Frescobaldi…
The intrepidness with Francesco Tristano combines eras and styles, occasionally allowing them to collide, may initially create a baffled response. However, Luxembourg-born Tristano has no aspirations as an agitator. Almost everything he does is an expression of an open-minded attitude which refuses to accept borders and constrictions. Tristano knows all about the interpretational conventions that have shaped generations of classical pianists – and he has chosen to ignore them. He does not seek approval as an artist and when his dynamic performance emotively basks in the intrinsic severity of Old music – that’s when he’s truly radical.
Tristano, born in 1981, discovered the piano at the age of five. Aged 13, he played his first concert, presenting his own compositions. He later toured both as a soloist and with renowned orchestras, such as the Russian National Orchestra, the Deutsches Symphonie-Orchester Berlin, and the Hanoi Philharmonic Orchestra among others. Tristano founded his chamber ensemble, The New Bach Players which he also conducts. This ensemble consciously breaks with conventions, using a modern grand piano and old, vibratoless bows on contemporary string instruments.
Tristano visited New York’s Juilliard School during five years. The city of New York opened his ears to electronic and club music. to complete Bach legend Rosalyn Tureck’s master class. In 2004, he won the first prize at the International piano competition for contemporary music in Orléans, France. Tristano has released twelve albums, among them recordings of Bach Goldberg Variations and complete keyboard concertos, Luciano Berio complete piano works, and Girolamo Frescobaldi Toccatas. ‘Not for Piano’ (inFine, 2007), presented his own compositions as well as versions of techno classics at the piano. ‘Idiosynkrasia’ (inFine, 2010), recorded at Carl Craig’s Planet E-communications in Detroit, was released to critical acclaim in 2010. ‘bachCage’, produced by Moritz von Oswald, was released on DGG in 2011. Tristano is a Deutsche Grammophon artist and he just released his third album “scandale” with Alice Sara Ott on that label. His collaborative tracks and remixes have been released on labels such as Innervisions, CLR, Visionquest, PIAS and Infine.