Pick Me Up Off The Floor Norah Jones 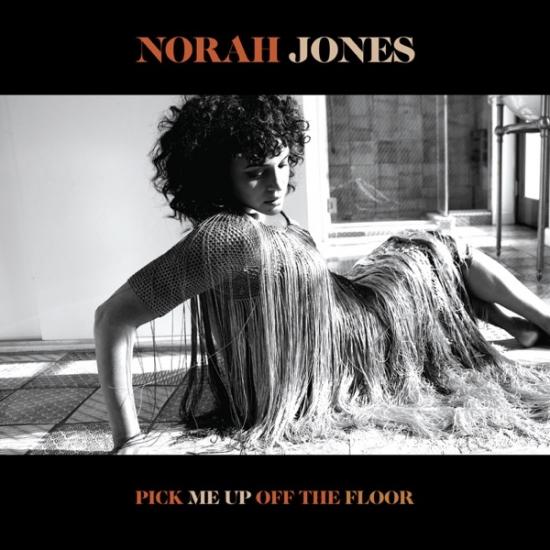 Info for Pick Me Up Off The Floor

Nine-time GRAMMY winning singer, songwriter, and pianist Norah Jones will release her seventh solo studio album "Pick Me Up Off The Floor".
Jones didn't mean to make another album. After she finished touring 2016's Day Breaks — her beloved return to piano-based jazz — she walked away from the well-worn album cycle grind and into an unfamiliar territory without boundaries: a series of short sessions with an ever-changing array of collaborators resulting in a diverse stream of singles (with Mavis Staples, Rodrigo Amarante, Thomas Bartlett, Tarriona Tank Ball, and more). But then slowly but surely, the session songs Jones hadn't released congealed into that very thing she'd meant to avoid — an album. But Pick Me Up Off The Floor is not some disjointed collage. It holds together beautifully, connected by the sly groove of her piano trios, lyrics that confront loss and portend hope, and a heavy mood that leans into darkness before ultimately finding the light.
"Every session I've done, there've been extra songs I didn't release and they've sort of been collecting for the last two years," says Jones. "I became really enamored with them, having the rough mixes on my phone, listening while I walk the dog. The songs stayed stuck in my head and I realized that they had this surreal thread running through them. It feels like a fever dream taking place somewhere between God, the Devil, the heart, the Country, the planet, and me."
Sure enough, just as this set of songs blurs sonic colors (blues, soul, Americana, and various shades of jazz) it also swirls the personal and political, specific pain and societal trauma, into one mercurial body. Even the album title's meaning seems to shift. The words "Pick Me Up Off the Floor" at times play as a plea for outside intervention, but in other moments the phrase feels like a bootstraps-style statement of purpose, as on the rootsy "I'm Alive," made in Chicago with Jeff and Spencer Tweedy, where Jones slashes her own silver lining into the haze of the modern news cycle: "She’s crushed by thoughts at night of men / Who want her rights and usually win / But she’s alive, oh she’s alive."
"Living in this country — this world — the last few years, I think there's an underlying sense of, 'Lift me up. Let's get up out of this mess and try to figure some things out,'" says Jones. "If there's a darkness to this album, it's not meant to be an impending sense of doom, if feels more like a human longing for connection. Some of the songs that are personal also apply to the larger issues we're all facing. And some of the songs that are about very specific larger things also feel quite personal."
The backbone of this album was formed early in an especially fruitful session with her go-to drummer Brian Blade who appears on six of the album’s 11 tracks. Other musicians who contribute throughout include bassists Christopher Thomas, John Patitucci, Jesse Murphy, and Josh Lattanzi, drummers Nate Smith, Dan Rieser, and Josh Adams, keyboardist Pete Remm, pedal steel guitarist Dan Iead, violinist Mazz Swift, violist Ayane Kozasa, cellist Paul Wiancko, percussionist Mauro Refosco, background vocalists Ruby Amanfu and Sam Ashworth, and the horn section of trumpeter Dave Guy and tenor saxophonist Leon Michels.
"I don't know if I was just in a zone or if this process turned it on, but I’ve felt more creative in the last year than I ever have," says Jones. By completely rethinking the way she made music, Jones discovered a new wellspring of inspiration, with the fortunate if unexpected result of making an album of tremendous depth and beauty that she was not trying to make.
Unpredictability has been a hallmark of Norah Jones' career from the start. She first emerged on the world stage with the February 2002 release of Come Away With Me, her self-described “moody little record” that introduced a singular new voice and grew into a global phenomenon, sweeping the 2003 GRAMMY Awards. Since then, Norah has sold 50 million albums globally and become a nine-time GRAMMY-winner. Her songs have been streamed five billion times worldwide. She has released a series of critically acclaimed and commercially successful solo albums—Feels Like Home (2004), Not Too Late (2007), The Fall (2009), Little Broken Hearts (2012), and Day Breaks (2016)—as well as albums with her collective bands The Little Willies, El Madmo, and Puss N Boots featuring Sasha Dobson and Catherine Popper who released their second LP Sister in 2020. The 2010 compilation …Featuring Norah Jones showcased her incredible versatility by collecting her collaborations with artists as diverse as Willie Nelson, Outkast, Herbie Hancock, and Foo Fighters. Since 2018 Jones has been releasing a series of singles including collaborations with artists and friends such as Mavis Staples, Jeff Tweedy, Thomas Bartlett, Tarriona Tank Ball, Rodrigo Amarante, and Brian Blade. The 2019 singles collection Begin Again gathered seven snapshots of creativity from one of the music world’s most consistently intriguing artists.
Norah Jones, vocals, piano
Jeff Tweedy, electric and acoustic guitar, bass
Dan Iead, pedal steel guitar
Pete Remm, keyboards
Christopher Thomas, bass
John Patitucci, bass
Jesse Murphy, bass
Josh Lattanzi, bass
Brian Blade, drums
Nate Smith, drums
Spencer Tweedy, drums
Dan Rieser, drums
Josh Adams, drums
Mauro Refosco, percussion
Dave Guy, trumpet
Leon Michels, tenor saxophone
Mazz Swift, violin
Ayane Kozasa, viola
Paul Wiancko, cello
Ruby Amanfu, background vocals
Sam Ashworth, background vocals
Produced by Norah Jones (except “I’m Alive” and “Heaven Above” produced by Jeff Tweedy)

Pick Me Up Off The Floor (Deluxe Edition)

Pick Me Up Off The Floor

Come Away With Me (Remastered)

Not Too Late (Remastered)

Norah Jones
Sultry vocalist and pianist Norah Jones developed her unique blend of jazz and traditional vocal pop with hints of bluesy country and contemporary folk due in large part to her unique upbringing. Born March 30, 1979, in New York City, the daughter of Ravi Shankar quietly grew up in Texas with her mother. While she always found the music of Billie Holiday and Bill Evans both intriguing and comforting, she didn't really explore jazz until attending Dallas' Booker T. Washington High School for the Performing and Visual Arts. During high school, Jones won the Down Beat Student Music Awards for Best Jazz Vocalist and Best Original Composition in 1996, and earned a second Best Jazz Vocalist award in 1997. Putting her vocal talents on the back burner, Jones worked toward earning a degree in jazz piano at the University of North Texas for two years before accepting a friend's offer of a summer sublet in Greenwich Village during the summer of 1999.
Although she fully intended to return to college that fall, the lure of the folk coffeehouses and jazz clubs proved too strong and she was soon inspired to write her own songs. Jones appeared regularly with the trip-hop-electronica band Wax Poetic and assembled her own group around songwriters Jesse Harris (guitar) and Lee Alexander (bass), with Dan Rieser on drums. In October of 2000, the group recorded a handful of demos for Blue Note Records and on the strength of these recordings, Jones signed to the jazz label in early 2001. Following an appearance on Charlie Hunter's Songs from the Analog Playground, Jones spent much of 2001 performing live with Hunter's group and working on material for her debut.
Come Away with Me, recorded by Craig Street (Cassandra Wilson, Manhattan Transfer, k.d. lang) and legendary producer Arif Mardin (Aretha Franklin, Dusty Springfield, the Bee Gees), was released in early 2002 and garnered much public attention. The combination of her striking beauty and the fact that she was the daughter of an internationally renowned musician placed Jones in the awkward position of defending her music from those who dismissed her as another pretty face (the same argument used by those opposed to Diana Krall) and/or another riding the coattails of her musical royal heritage (see Natalie Cole, Miki Coltrane, Corey Parker). Although not by any stretch a "jazz" album (the label chose to call it "jazz-informed"), it featured jazz guitarist Bill Frisell and session drummer Brian Blade, and indicated a new direction for Blue Note combining jazz aesthetics and talent with a pop sensibility. Come Away with Me eventually went multi-platinum, selling 18 million copies worldwide and winning Jones eight Grammy Awards.
In 2004, Jones released her highly anticipated follow-up album, Feels Like Home. Pairing once again with producer Arif Mardin, Jones pursued a similar approach to Come Away with Me, mixing '70s singer/songwriter-style tracks with blues, country, and her own mellow take on piano jazz. In 2003, Jones played in a group called the Little Willies along with Lee Alexander (bass), Richard Julian (guitar/vocals), Dan Rieser (drums), and Jim Campilongo (guitar), playing covers of classic American music like Hank Williams, Willie Nelson, and Kris Kristofferson. This one-off performance ultimately turned into sporadic shows at the venue whenever their individual schedules would allow, slowly incorporating original songs into their set along the way. In time, the Little Willies began considering the release of a live album, but instead wound up documenting their sound in the recording studio. Milking Bull Records issued the resultant self-titled album in March 2006.
Late in 2006, the single "Thinking About You" announced a return to her solo career. It landed on the album Not Too Late, released in early 2007. The Fall arrived in 2009, followed in 2010 by ...Featuring Norah Jones, a collection of musical collaborations. The following year Jones was asked to provide some vocals for Danger Mouse (aka Brian Burton) and Italian composer Daniele Luppi's spaghetti Western project, Rome. Burton returned the favor in 2012 by producing and co-writing the songs on Jones' fifth studio album, Little Broken Hearts. She next teamed with Green Day's Billie Joe Armstrong in a project to re-create the classic 1958 Everly Brothers album Songs Our Daddy Taught Us. Recorded in nine days with bassist Tim Luntzel and drummer Dan Rieser, Foreverly was released in 2013.