On his website, Mark Egan describes song for song in rare but accurate detail the recording process used and the care taken in the creation of his newest album. This, the seventh by the Egan / Forman / Gottlieb trio, has just been released on Wavetone Records, which is a label Egan himself founded. Egan goes on in painstaking detail describing each piece of hardware, the sound character of the recording rooms in his new studio, their interaction with the five and eight string fretless bass guitars used in the recording, the keyboards, including an authentic grand piano, drums, and the subsequent mixing. There was obviously an audiophile passion at work in the production of ‘About Now’, which pulled together an impressive array of studio professionals – their aim being to bring the album’s nine Egan original compositions to an audience, men and women, with absolutely the highest possible, optimum level of sound quality. The state-of-the-art sound offered in the form of a high-resolution download heralds the success of the effort, which was clearly driven by recording studio technology and mixing expertise.

Fans of Mark Egan know what to expect when the master of the electric bass teams up with the intensive drummer Danny Gottlieb, who’s been with Egan since the Pat Metheny days, and a keyboard player of the stature of Mitchel Forman, a former band member and colleague of Wayne Shorter and John McGlaughin. What you have is a Pat Metheny Group reunion on a smaller scale. Mark Egan has also admitted that he was playing trumpet as a musician in his early youth, before he became permanently addicted to the bass guitar when he was sixteen. His successful career since has been documented, from his collaboration with Pat Metheny at the end of the seventies and the highly successful albums, ‘Pat Metheny Group’ and ‘American Garage’; and continues to this day.

The trio actually prefers playing a rich variety of melodious songs on ‘About Now’ allowing their virtuosity - something the three musicians certainly don’t have to display—to take a back seat. In ‘Sailing’, Egan surfs with his five string fretless bass, overdubbed with his eight string instrument, all dynamically inspired by Forman on the keyboards, and Gottlieb’s brushwork. Immediately following the melodious title track is the relaxed and groovy, ‘Slinky.’ And ‘Grateful Branch’ gives Egan the opportunity to create an articulate ballad on his fretless bass. In the very cool ‘McKenzie Portage’, composer Egan takes us euphorically through the vast expanses of Canada, commemorating a trip he took many years ago with the saxophonist Bill Evans. A trip to distant China, which he took with the George Grunz Concert Band, finds expression in ‘Tea in Tiananmen Square’; and ‘Cabarete’ refers to the well-known surfing paradise in the Dominican Republic. The album ends with another trip impression, this time of ‘Puerto Plata’, which, as with the other travel memories, allows the trio to improvise extensively on the compositional template in reciprocating interplay, each motivating the other.

„About Now“ is a must have for all fans of Metheny's sound, and for all those who might want to become one.

We listened to this 96 kHz, 24-bit FLAC download in an acoustically optimized listening room, through Revel Gem2/B15a loudspeakers, driven by a custom-made PWM digital amplifier; with its SPDIF input connected directly to a dedicated audio computer for the downloaded data. 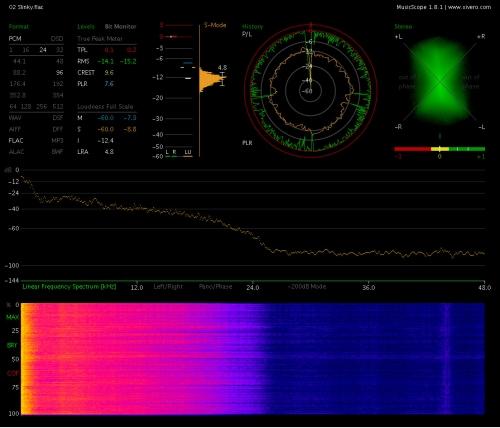 Commentary:
The available technical spectrum is fully utilized to 96 kHz.