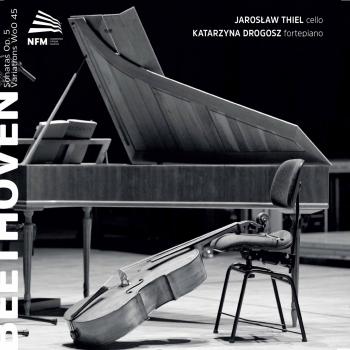 Jarosław Thiel
Artistic Director of Wrocław Baroque Orchestra. A graduate of the Poznań School of Talents, he studied cello at the Music Academies in Poznań and Łódź. Since 1997 he has focused mainly on historical performance. Jarosław Thiel participated in master classes run by Christine Kypranides at the Dresdner Akademie für Alte Musik and completed post-graduate studies in Baroque cello at the Universität der Künste in Berlin, working with Phoebe Carrai and Markus a Möllenbeck (diploma with distinction). He has collaborated with the most important Polish ensembles of early music. Since 2000 Thiel is the first cellist with the Dresdner Barockorchester and a member of the FestspielOrchester Göttingen led by Laurence Cummings. He also works with other leading German ensembles, such as Cantus Cölln, Akademie für Alte Musik Berlin and Lautten Compagney. He regularly performs as a soloist and chamber musician, apperaig at numerous Polish and international festivals of early music. He teaches Baroque cello at the Academy of Music in Poznań and during the Summer Academy of Early Music in Lidzbark Warmiński, Poland. In 2006 he was appointed artistic director of the Wrocław Baroque Orchestra.
Katarzyna Drogosz
was born in Warsaw, Poland. As a pianist, she specialises in playing historical instruments. Besides interpretation, she is interested in the history and construction of early keyboards.
Katarzyna Drogosz studied piano at the Frederic Chopin Academy of Music in Warsaw, fortepiano at the Conservatorium van Amsterdam, and historical keyboard instruments at the Musikhochschule Freiburg. In 2007, Katarzyna Drogosz was one of the four finalists of the “Musica Antiqua” international competition for fortepiano solo in Bruges. She performs regularly in Poland and abroad, and cooperates with renowned instrumentalists such as pianist Petra Matejova, trombone player Ercole Nisini and cellist Jarosław Thiel. She took part in many important festivals in Poland and Europe. As a fortepiano soloist and continuo player she performed with Capella Cracoviensis, Wrocław Baroque Orchestra and Musicae Antiquae Collegium Varsoviense.
Since 2010 Katarzyna Drogosz has been teaching harpsichord, fortepiano and historical performance practice at the Karol Szymanowski Academy of Music in Katowice, where she is also a PhD candidate. She has taught fortepiano interpretation classes at international summer schools of early music in Wilanów and Markt-Nordheim.
Katarzyna Drogosz is a co-founder of “Fortepianarium”, a collection of fortepianos and other keyboard instrument in Zabrze (Silesia).