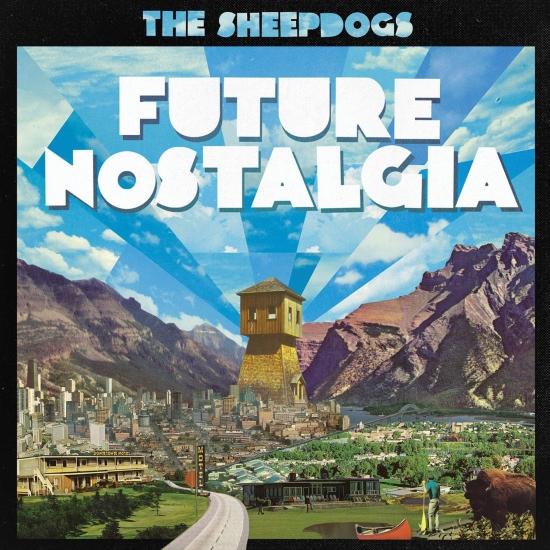 „Future Nostalgia“ is produced by lead vocalist and songwriter Ewan Currie alongside engineer Matt Ross-Spang (former engineer at Memphis’ Sun Studios) the 18 freshly-minted tracks on Future Nostalgia were recorded in the quiet and idyllic setting of Stony Lake, Ontario, a conscientious choice by the band to ensure they kept all distractions at bay and the recording process as natural as possible. The band, comprised of Currie, Ryan Gullen (bass/vox), Sam Corbett (drums/vox), Shamus Currie (keys/horns) and Rusty Matyas (guitar/vox), set up camp up for several weeks in a rented house in the remote country where they trucked in equipment to build a studio in order to record their latest effort. Says Currie “We worked from morning ‘til night, but we kept it loose, had a real good time, and came away with a rock n’ roll record”.
The latest record has many flavours showcasing the band’s creative license when left to their own devices ranging from the catchy, signature-sounding single “Downtown” to the introspective, and soulful groove of “Bad Lieutenant” to “Help Us All”, a fresh take on a vintage vibe featuring a trombone solo from Ewan’s brother Shamus. Another highlight is the laid back, good-time, backyard jam “Same Old Feeling”, as well as the closing 6 tracks which flow one into the other to create a cohesive medley, much like the band did on their 2010 LP Learn and Burn.
Formed in Saskatoon in 2006, The Sheepdogs have received widespread acclaim for their bold and beautiful take on classic guitar rock, evinced on three self-funded, independently released albums. The band’s hard work, determination and impressive chops have earned them a fervent fan following, leading to the accumulation of various achievements and awards including four JUNO awards, seven JUNO nominations, Gold certification for The Sheepdogs and Platinum certification for Learn and Burn. The band’s 2012 self-titled LP
Debuted at #1 on the Top 200 SoundScan Chart, and garnered three #1 singles at Rock Radio including Gold certified tracks “Feeling Good” and “The Way It Is”. As impassioned on stage as they are on record, The Sheepdogs have spent much of their musical lifetime on the road playing innumerable headline shows and festival appearances worldwide.
„Carrying on the proud Canadian rock & roll tradition of easy on the brain and ears, pure as Nunavut snow classic rock & roll in the vein of the Guess Who and Bachman Turner Overdrive, the Sheepdogs' fifth studio long player, the aptly named Future Nostalgia, sounds like the work of a seasoned bar band who decided to tweak their set of classic rock covers by writing their own alternate-universe versions. Everything on the LP sounds instantly familiar, from the Bad Company-esque "Giving It Up for My Baby" to the Zep-loving "Hey, Hey What Can I Do"-inspired "Downtown." That the latter of the two sees no shame in rhyming "sweet baby" with "don't say maybe" shouldn't put listeners off, as the myriad tropes (both lyrical and musical) that make up the 19-track set are delivered so artfully, and most importantly, without a hint of irony, that the overall effect is a lot like finding that rare classic rock radio station that doesn't just play the same three Foreigner songs all day. They even manage to work in an appropriately spacy instrumental tribute to Jim Sullivan, the obscuro, cosmos-obsessed singer/songwriter who mysteriously disappeared in the New Mexico desert in 1975 after releasing a one-off U.F.O-themed folk-rock record six years prior. Also, don't be put out by the number of tracks, as the album only clocks in at around 50 minutes, all of which are relegated to delivering your ear holes a bevy of expertly played Queen-style guitarmonies, stadium-ready singalongs, boogie rock backbeats, Rhodes electric piano solos, and stories about good times gone bad/bad times gone good. Solid.“ (James Christopher Monger, AMG)
Ewan Currie, lead vocals, guitars, clarinet, bongos, Roland synth, piano Shamus Currie, Hammond organ, piano, Wurlitzer, Farfisa, trombone, backing vocals, guitar, percussion Ryan Gullen, bass, backing vocals, percussion
Sam Corbett, drums, backing vocals, percussion
Rusty Matyas, guitars, backing vocals, trumpet, Wurlitzer, percussion
Additional musicians:
Travis Good, guitar (on Help Us All and Plastic Man)
Lucas Goetz, pedal steel (on Plastic Man)
Produced by Ewan Currie 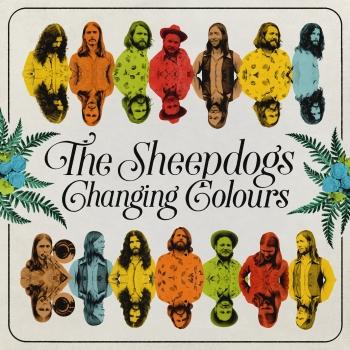 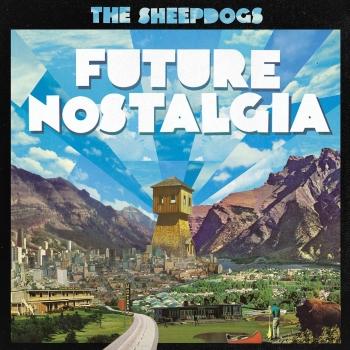 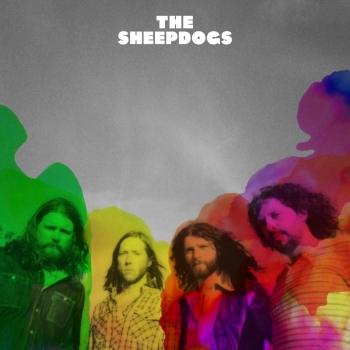 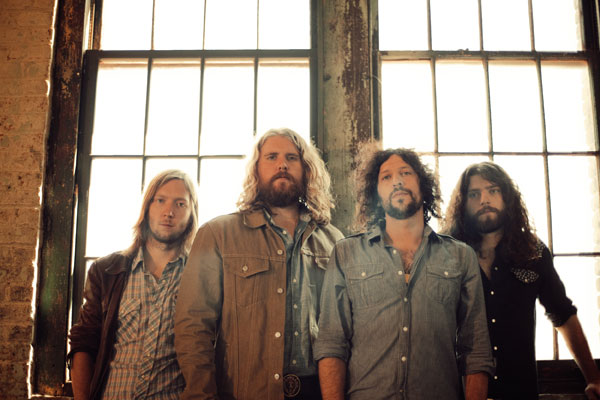 The Sheepdogs built their name on hard work and determination. Having funded their first three albums and early years of touring on their own, this rock and roll band’s momentum began to build exponentially with the release of the 2010 album, Learn & Burn. The band would go on to win three 2012 JUNO Awards (the Canadian equivalent of a Grammy): New Group of the Year, Single of the Year and Rock Album of the Year. With a list of accolades this impressive the band is on the brink of engaging fans on a wider scale.
The Sheepdogs will do just that with the release of their new self-titled album, produced by The Black Keys’ Patrick Carney and Austin Scaggs, which will genuinely introduce them to the U.S. and beyond.
Hailing from the small Canadian town of Saskatoon, SK, The Sheepdogs won an international competition in 2011 securing them the cover of Rolling Stone, making the group the first unsigned band to appear on its front page. The win, decided by 1.5 million public votes, also scored them a record deal with Atlantic, which offered up a new EP from the band, Five Easy Pieces, in August 2011.
After the band was introduced to Carney at Petty Fest in New York last year, he immediately began offering ideas for The Sheepdogs next album (“He seemed strangely passionate about it,” Currie notes). The hope was that Carney could actually produce the album. In January, Carney invited the band to the studio, where they culled together old material and quickly began laying down new ideas.
“I think different albums have processes and this was a different experience for us, but that’s part of what makes it interesting,” Currie said. “We wanted to just go with the flow and make the album that represented where we are now. We were rushed into the studio, but you can let that pressure destroy you or you can let that pressure galvanize you, and I think it was a positive force. Having that tight time structure, buckling down and doing music all day every day was great.”
Although the band had only spent those two and a half weeks with Carney, Scaggs and studio engineer Roger Moutenot in Nashville’s Haptown Studios, the sessions proved fruitful. From the first single “The Way It Is,” a thumping, blues-tinged track, to rollicking stomper “Feeling Good,” the album embraces a vast range of influences, pulling in various styles and genres to create a collection of raucous, unabashed rock and roll numbers. A pensive reflection is threaded throughout, whether on mid-tempo acoustic track “Laid Back” or on pounding rocker “While We’re Young.”
“I think Patrick has a good sense of no bullshit,” Currie says. “A lot of making rock and roll is about cutting the fat and being a good filter. In the studio, he helped us refine the songs and found the best representation of each one possible. Plus, we wanted to be able to incorporate all different styles and I think our albums run the gamut.”
After touring steadily since 2006 and spending the last year entirely on the road with bands like Kings of Leon, John Fogerty and Robert Randolph & the Family Band, The Sheepdogs hoped to create songs that would lend themselves to their impassioned performances. The band, which has also performed at numerous festivals, including Coachella, Bonnaroo and SXSW, enlisted a keyboard player as the new album features a heavy dose of Hammond organ and Rhodes piano.
In the end it all ties back to the group’s goals, which essentially involve making really good rock songs, and you don’t need a crazy origin story to do that.
“Our goal is two-fold,” Currie says. “We want to make killer albums that people really want to listen to, but we also want to have a really reputable live show. When we come through town we want to be the hottest ticket there. Those two elements are what make a truly great rock and roll band. Really, though, we just want to play to anyone who is willing to give us a shot and who wants to have a good time.”