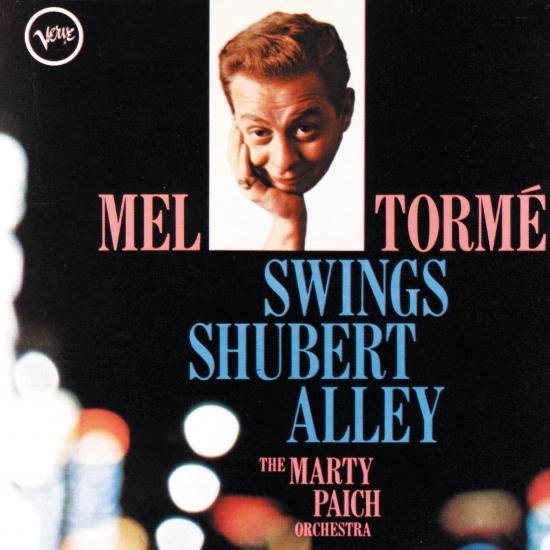 Mel Torme's smooth, romantic singing style earned him the nickname the Velvet Fog. Although he came out of the crooner tradition of the '40s and has sometimes been compared to Frank Sinatra, he is a unique talent. The multifaceted Torme is not only a singer but also a pianist, drummer, arranger, and composer, and also had a career as an actor on television and radio. „Swings Shubert Alley“ represents Torme singing at his best.The repertoire is a selection of Broadway tunes from songwriters such as Leonard Bernstein and Rodgers and Hammerstein, and the arrangements kick these well-known songs into high gear. Backed by the highly polished Marty Paich Orchestra, Torme is at his swinging peak on the classics 'Just in Time' and 'Too Darn Hot.' A superbly recorded album for its time, and a must-have for fans of great jazz singing.
'..Torme has outdone himself...His voice is warm, rich, and pure, a mature vocal instrument. His perceptive phrasing is sheer delight...This is truly jazz singing..' (Down Beat)
Mel Tormé, vocals, drums
Art Pepper, alto saxophone
Bill Perkins, tenor saxophone
Bill Hood, baritone saxophone
Al Porcino, trumpet
Stu Williamson, trumpet
Vincent DeRosa, French horn
Frank Rosolino, trombone
Red Callender, tuba
Marty Paich, piano
Mel Lewis, drums
Recorded in Los Angeles, California on January 21, February 4 & 11, 1960
Engineered by Val Valentin
Produced by Russell Garcia
Digitally remastered