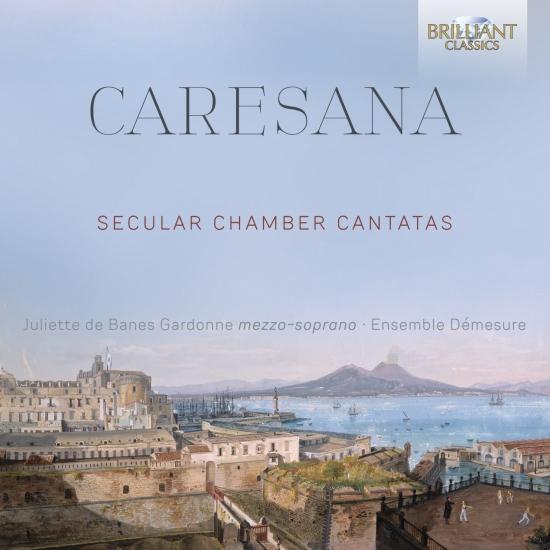 Secular cantatas of love and tragedy by a Neapolitan precursor of Pergolesi, in world premiere recordings.
Born in Venice, Cristofaro Caresana (c.1640-1709) made his career in Naples as a singer, organist, choirmaster and composer. Both sacred and secular vocal works survive but have been very little known beyond libraries. This album affords a rare opportunity to get to know a lively 17th-century musical voice, interpreted by a young early-music group.
Ensemble Démesure present eight cantatas, all based on time-honoured Classical themes. Scored for solo voice and continuo, they alternate recitative and aria, though the distinction between the two genres is often blurred. On occasions the recitatives tend in the direction of arias, whereas the arias themselves are more structured in form. In this they represent a perfect synthesis of Venetian and Monteverdi-style musical narrative, in an idiom typical of the style that made Naples the musical capital of Italy at the time of Caresana’s maturity.
La Rosa is dedicated to the flower symbolic of passion, in which thorns and petals are associated with lovelorn grief and intensity of feeling. Il Narciso tells the story of the young man who drowns having fallen in love with his own reflection in the water. Folk melodies and artful technique also combine to produce an affecting lament in the cantata Viver senza speranza (To live without hope). The closing item on the album is Tancredi sulla morte di Clorinda, setting a text famously treated by Monteverdi, to whom Caresana pays humble tribute.
Juliette De Banes Gardonne, mezzo-soprano
Ensemble Démesure 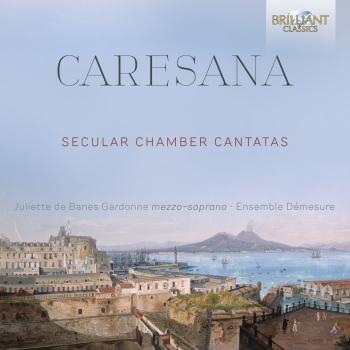 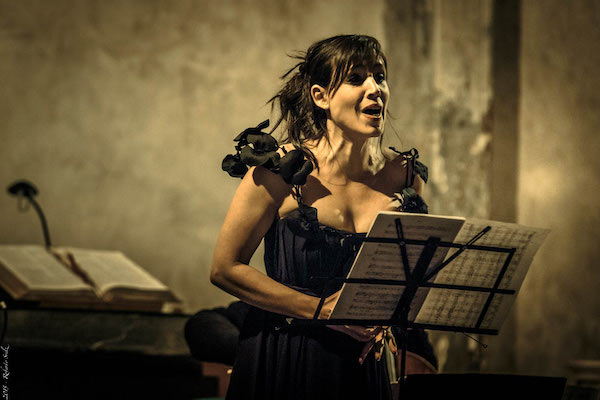 Juliette de Banes Gardonne
a French mezzo-soprano of Italian origin, graduated from a soloist Master’s degree with the Haute École de Musique de Genève (Geneva HEM) and holds a Diploma of Advanced Studies from the Haute École de Musique de Lausanne (Lausanne HEMU). She took the master classes of Bernarda Fink, Stéphanie d’Oustrac and Sara Mingardo.
Juliette de Banes Gardonne was granted a scholarship from the SIGG Foundation in 2011 and from the Ernst Göhner Foundation in 2012. She was a resident of the Centre National d’Insertion Professionnelle des Artistes Lyriques (CNIPAL) in 2012-2013. She also won the Migros Culture Percentage in 2013-2014. The color of her voice and her ability to produce beautiful vocalizations naturally led her to the baroque repertoire and to Rossini’s operas. She was a finalist in international contests such as F. Provenzale of the Cappella dei Turchini in Naples in 2013 and the Froville baroque singing competition in 2015.
As an alto soloist, she performed Monteverdi’s Madrigali guerrieri ed amorosi, Carissimi’s Historia di Jephte, Pergolesi’s Stabat Mater, Bach’s St John Passion, Beethoven’s Ninth Symphony and Brahms’ Liebeslieder und neue Liebeslieder. As far as opera is concerned, she performed as the public opinion in Offenbach’s Orpheus in the Underworld (BFM, Genève), as Meg in Verdi’s Falstaff (Sorru Festival), as Lapak in Janacek’s The Cunning Little Vixen (Crochetan theater in Monthey), as Mademoiselle Dangeville in Cilèa’s Adriana Lecouvreur (Opéra de Nice), as Javotte in Massenet’s Manon (Opéra de Lausanne), as Maddalena in Verdi’s Rigoletto (Centre Lyrique Clermont-Auvergne) and, in a concert performance, as the lead in Purcell’s Dido and Eneas (Cappella Genevensis).
She is also intensely working on baroque music and the unprecedented repertoire of the Neapolitan composer Cristofaro Caresana. With the Italian musicians Paola Erdas, Alberto Guerrero and Franco Pavan, she created the “Ensemble Démesure”. Her “Trésors du baroque napolitain” project (Neapolitan baroque treasures) enabled her to be scheduled as a new talent in the Rougemont Folia baroque festival in 2015.
In 2016, she will notably be Marianna in Rossini’s Il Signor Bruschino with the Geneva’s chamber orchestra, and Dulcinée in Massenet’s Don Quichotte at the Théâtre du passage in Neuchâtel. She is also in the process of recording her first album dedicated to Caresana with the Ensemble Démesure.
Ensemble Démesure
Founded in 2006, Ensemble Démesure has made the cantata – the emblematic genre of the 17th and 18th centuries – its core repertoire. The members of the ensemble hail from different countries, but share a particular interest in the Neapolitan Baroque School. They largely focus on unpublished works, delving deep into the extravagance of baroque expression and its intrinsic contrast with scholarly passion. In this sense they are Démesure: in other words, unconstrained, measureless, in their pursuit of musical chiaroscuro.