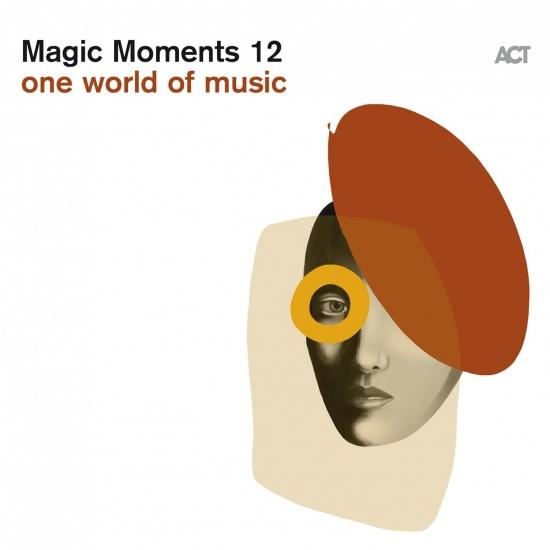 Info for Magic Moments 12 (One World of Music)

One World Of Music. The ACT label has jazz at its core, and an openness to all kinds of musical directions: pop, rock, the music of singer-songwriters and traditional folkloric forms such as flamenco and tango. These very different genres nonetheless never fail to find new and magical ways to work together. The twelfth Magic Moments compilation presents exciting music "in the Spirit of Jazz". All kinds of pleasure await the listener during its 71 minutes. And what can one expect to hear in this world so far away from a single pre-determined style? There are surprises, obviously. Plus several chances to re-connect with established and familiar stars. And discoveries of some genuinely exciting newcomers.
The opening track is from Iiro Rantala on solo piano. His portrait of the month of "August" is from "My Finnish Calendar", an album which sets to music the course of an entire year in his home country from a very personal point of view. Argentinian tango is a prime example of a musical tradition which is not just lively but is also constantly developing. The Javier Girotto Trio proves the point in "Deus Xango" from "Tango Nuevo Revisited", a contemporary re-imagining of the Piazzolla/Mulligan classic album from 1975. "Four top-league jazz musicians who just enjoy playing". That description by the TV programme ZDF today Journal) defines exactly what "4WD" is all about. The four bandleaders involved are Nils Landgren, Michael Wollny, Lars Danielsson and Wolfgang Haffner). Each of them is in equal control and they all set the direction of the group.
"Flamenco and jazz are brothers," says Spanish piano newcomer Daniel García. In his energetic trio with special guest Jorge Pardo, he shows just how true that statement is with the fiery "Travesuras". French accordionist Vincent Peirani and his wife Serena Fisseau then create a familiar musical refuge: "What A Wonderful World" is a paean to silence. A duo of newcomers to the label, Grégoire Maret and Edmar Castaneda create new and exciting sound worlds. In "Harp vs. Harp" harmonica meets harp. This is indeed a special and rare pairing; "Blueserinho" absolutely needs to be heard.
With his "Italian Songbook" trumpeter Luca Aquino has re-corded a homage to the music of his homeland. Here is "Scalinatella" by film composer Giuseppe Cioffi in an affecting version for trio with the Italian piano star Danilo Rea and accordionist Natalino Marchetti. Singer Cæcilie Norby unites musicians from several generations and countries on "Sisters in Jazz". Her composition "Naked In The Dark" demonstrates that jazz is far from being only about men.
"Klinken" comes from the debut album "Stax" by the 25-year-old drummer Max Stadtfeld, a release in the Young German Jazz series. Stadtfeld and his comrades-in-arms have no truck with intellectuality, they move in the rhythm-oriented mainstream and yet point beyond it. With freshness and astonishing maturity this quartet thrills and excites. For over 10 years the successful trio Mare Nostrum with Paolo Fresu, Richard Galliano and Jan Lundgren has been the epitome of the sound of Europe. All three musicians have a quite fabulous sense of the lyrical and poetic which is again very much to the fore in their third album; Magic Moments 12 has the Swedish "Ronneby". As the magazine Galore writes of German jazz icon Joachim Kühn. “He interprets Ornette Coleman's music in his very own way: lyrically, gently and introvertedly, but full of surprising details." Kühn re-lives the unique story of his work alongside one of the legends of jazz here with "Lost Thoughts", a piece never recorded before.
On 6 February 2019, jazz baroness Pannonica (Nica) de Koenigswarter (1913-1988) received a posthumous tribute for her tireless commitment to jazz in a concert at the Philharmonie in Berlin. The focus was on pieces by musicians whom Pannonica had supported over so many years with money, accommodation, advice and friendship, and who often dedicated compositions to her in gratitude, "Little Butterly" by Thelonious Monk for example. The New York singer Charenée Wade is in the limelight here, accompanied by Iiro Rantala, Dan Berglund and Anton Eger, with the American saxophone titan Ernie Watts.
"An Israeli power trio. Heavy Jazz," Rolling Stone wrote of Shalosh. And when you hear the frenzied "After The War" it is obvious why: rock and indie jazz combine to form a mix which is full of tension and excitement. Violinist Adam Baldych is a supremely talented virtuoso. Stereo Magazine has described him as "one of the most technically brilliant interpreters of improvised music". "Longing" from his album "Sacrum Profanum" is a searingly sad ballad, sensitively interpreted in a duo with pianist Krzysztof Dys. On "Painted Music" the pianist Carsten Dahl gives his own highly personal take on classics of the jazz repertoire. The traditional Danish folk song "Jeg gik mig ud en sommerdag" (I went out on a summer’s day) is the sound of summer.
At the end of “Magic Moments 12”, Nguyên Lê's piece "Hippocampus" reminds us of "One World Of Music", the theme of the compilation. The French guitarist of Vietnamese ancestry is a musical wayfarer between cultures who combines the freedom of jazz with influences from rock and world music.

Booklet for Magic Moments 12 (One World of Music)