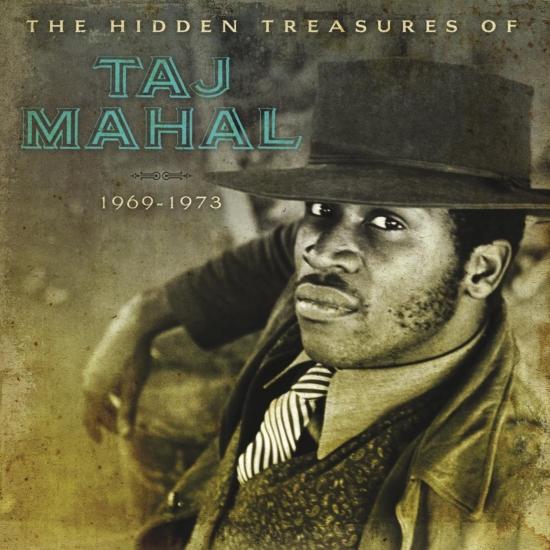 Info for The Hidden Treasures Of Taj Mahal (Remastered)

Harlem folkie wonder-cum-Chicago Blues badass Taj Mahal gets the legend treatment for his 70th birthday: Columbia has decided to honor the singer/songwriter/storytellers back pages with a hidden treasures release. Its a long, sweaty affair. Underlying it all, and no matter the kind of music hes playing, when Mahal sings he comes on like the black Bob Dylan: unmannered, guttural, loose but bold, toying with beginnings and endings of lines, at once interpretive of the masters but unlike anything heard before. If you prefer your Soul music with some gristle, and maybe fried in some -Bacon Fat,î then these rarities from early-era Taj is just the ticket.
A two-album sonic portrait chronicling the early stirrings of Taj Mahal's solo career, The Hidden Treasures of Taj Mahal 1969 - 1973 features two albumss comprised entirely of unreleased finished material. The first album debuts studio recordings from 1969-1973, while the second album premieres a full-length live concert, recorded April 18, 1970 at the Royal Albert Hall in London (on a bill that included Santana).
Digitally remastered 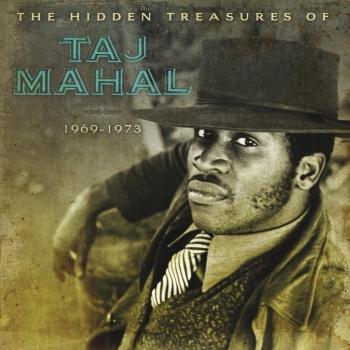 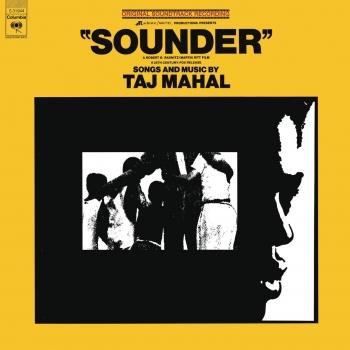 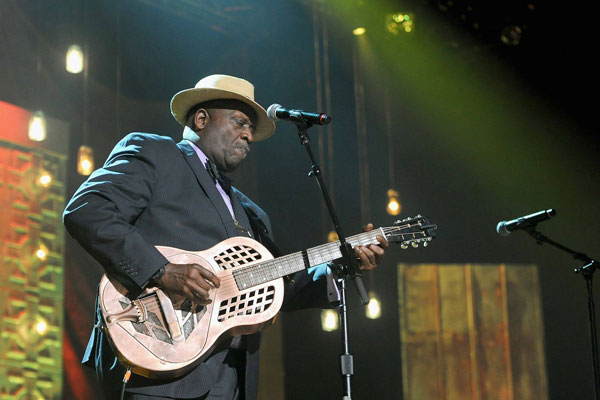 Taj Mahal
One of the most prominent figures in late 20th century blues, singer/multi-instrumentalist Taj Mahal played an enormous role in revitalizing and preserving traditional acoustic blues. Not content to stay within that realm, Mahal soon broadened his approach, taking a musicologist's interest in a multitude of folk and roots music from around the world — reggae and other Caribbean folk, jazz, gospel, R&B, zydeco, various West African styles, Latin, even Hawaiian. The African-derived heritage of most of those forms allowed Mahal to explore his own ethnicity from a global perspective and to present the blues as part of a wider musical context. Yet while he dabbled in many different genres, he never strayed too far from his laid-back country blues foundation. Blues purists naturally didn't have much use for Mahal's music, and according to some of his other detractors, his multi-ethnic fusions sometimes came off as indulgent, or overly self-conscious and academic. Still, Mahal's concept was vindicated in the '90s, when a cadre of young bluesmen began to follow his lead — both acoustic revivalists (Keb' Mo', Guy Davis) and eclectic bohemians (Corey Harris, Alvin Youngblood Hart).
Taj Mahal was born Henry St. Clair Fredericks in New York on May 17, 1942. His parents — his father a jazz pianist/composer/arranger of Jamaican descent, his mother a schoolteacher from South Carolina who sang gospel — moved to Springfield, Massachusetts, when he was quite young, and while growing up there, he often listened to music from around the world on his father's short-wave radio. He particularly loved the blues — both acoustic and electric — and early rock & rollers like Chuck Berry and Bo Diddley. While studying agriculture and animal husbandry at the University of Massachusetts, he adopted the musical alias Taj Mahal (an idea that came to him in a dream) and formed Taj Mahal & the Elektras, who played around the area during the early '60s. After graduating, Mahal moved to Los Angeles in 1964 and, after making his name on the local folk-blues scene, formed the Rising Sons with guitarist Ry Cooder. The group signed to Columbia and released one single, but the label didn't quite know what to make of their forward-looking blend of Americana, which anticipated a number of roots rock fusions that would take shape in the next few years; as such, the album they recorded sat on the shelves, unreleased until 1992.
Frustrated, Mahal left the group and wound up staying with Columbia as a solo artist. His self-titled debut was released in early 1968 and its stripped-down approach to vintage blues sounds made it unlike virtually anything else on the blues scene at the time. It came to be regarded as a classic of the '60s blues revival, as did its follow-up, Natch'l Blues. The half-electric, half-acoustic double-LP set Giant Step followed in 1969, and taken together, those three records built Mahal's reputation as an authentic yet unique modern-day bluesman, gaining wide exposure and leading to collaborations or tours with a wide variety of prominent rockers and bluesmen. During the early '70s, Mahal's musical adventurousness began to take hold; 1971's Happy Just to Be Like I Am heralded his fascination with Caribbean rhythms and the following year's double-live set, The Real Thing, added a New Orleans-flavored tuba section to several tunes. In 1973, Mahal branched out into movie soundtrack work with his compositions for Sounder, and the following year he recorded his most reggae-heavy outing, Mo' Roots.
Mahal continued to record for Columbia through 1976, upon which point he switched to Warner Bros.; he recorded three albums for that label, all in 1977 (including a soundtrack for the film Brothers). Changing musical climates, however, were decreasing interest in Mahal's work and he spent much of the '80s off record, eventually moving to Hawaii to immerse himself in another musical tradition. Mahal returned in 1987 with Taj, an album issued by Gramavision that explored this new interest; the following year, he inaugurated a string of successful, well-received children's albums with Shake Sugaree. The next few years brought a variety of side projects, including a musical score for the lost Langston Hughes/Zora Neale Hurston play Mule Bone that earned Mahal a Grammy nomination in 1991.
The same year marked Mahal's full-fledged return to regular recording and touring, kicked off with the first of a series of well-received albums on the Private Music label, Like Never Before. Follow-ups, such as Dancing the Blues (1993) and Phantom Blues (1996), drifted into more rock, pop, and R&B-flavored territory; in 1997, Mahal won a Grammy for Señor Blues. Meanwhile, he undertook a number of small-label side projects that constituted some of his most ambitious forays into world music. Released in 1995, Mumtaz Mahal teamed him with classical Indian musicians; 1998's Sacred Island was recorded with his new Hula Blues Band, exploring Hawaiian music in greater depth; 1999's Kulanjan was a duo performance with Malian kora player Toumani Diabaté. Maestro appeared in 2008, boasting an array of all-star guests: Diabaté, Angélique Kidjo, Ziggy Marley, Los Lobos, Jack Johnson, and Ben Harper. A holiday album with the Blind Boys of Alabama, Talkin' Christmas, appeared in time for the season in 2014.

Booklet for The Hidden Treasures Of Taj Mahal (Remastered)