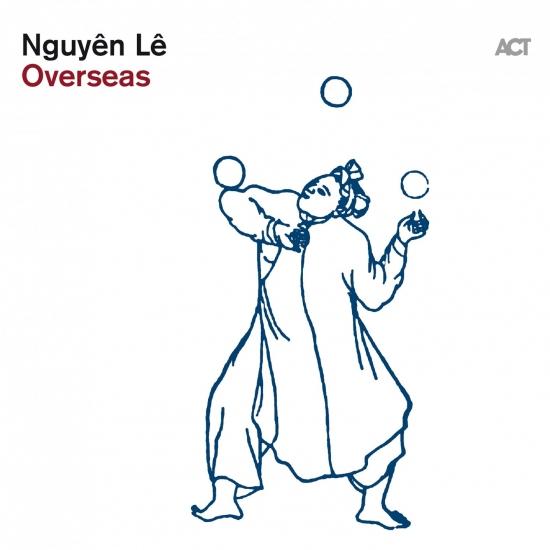 "Overseas" stems from an interdisciplinary performance project combining dance, acrobatics and music by the “Cirque-Nouveau”. Nguyên Lê has written the music, a mix of jazz, traditional Vietnamese music and hip-hop; "Overseas", from ACT is the soundtrack for this compelling vision of change and flux.
Nguyên Lê’s "Overseas" – the great guitarist brings jazz, traditional Vietnamese music and hip-hop to the music for “Cirque-Nouveau”.
"Overseas" stems from an interdisciplinary performance project combining dance, acrobatics and music. “Cirque-Nouveau”, conceived and directed by Tuan Le, whose other credits include work as lead choreographer for Cirque du Soleil, is an artistic reflection on the current zeitgeist of Vietnam, a country in which traditional lifestyles become disoriented through rapid modernisation, especially in the big cities. Nguyên Lê has written the music for it, a mix of jazz, traditional Vietnamese music and hip-hop; "Overseas", from ACT is the soundtrack for this compelling vision of change and flux.
It is not just guitarist Nguyên Lê’s peerless command of technique that makes him a truly unique musician. Throughout his life he has also had the role of a go-between combining very different cultures. "I was born in France as the son of Vietnamese parents,” says Lê. “As an artist, I began to build my own identity with the culture of my parents and the country I lived in. And I am far from alone in this. Many other people have this experience too, so it is something which can be shared all over the world, and not just by Vietnamese people.” And a distinctive feature of all his creative work, whether in the company of illustrious American colleagues, or in the E_L_B trio with Peter Erskine and Michel Benita, or on albums with the fine Vietnamese singer Huong Thanh, or indeed in numerous projects of his own, is that he has engaged with the theme of reconnection with the culture of his homeland. Jazz has been the medium for him to combine the Vietnamese musical tradition with a wide variety styles, from flamenco to the music of the Middle East and beyond. And his interpretations of Led Zeppelin, Janis Joplin and above all his groundbreaking Jimi Hendrix project are testimony to this, as they deal with the outstanding artists who emerged in the protest movement against the Vietnam War. 22 years after his programmatic album "Tales from Viet-Nam", "Overseas" represents a new chapter of his search for the Vietnamese soul through the prism of jazz, and one which is unprecedented both in its diversity and in its use of multimedia.
It is important to note that over time the questions that Lê has been asking himself have changed markedly: "Today it is no longer: 'Am I Vietnamese?’” he explains. “Because just as Vietnam itself has changed, so have I. Today I am Vietnamese and a citizen of the world. In my music that is what I want to express, so this project aims to bring out the creativity of the country as it is today. And that is why the show has been shaped by so many talents." And yet it is not strictly necessary to witness the incredible feats the performers and artists performing “Overseas” visually. One can be completely captivated by Lê's music, an inspiration in itself. Just as artists from several countries have brought together circus cultures from Paris, Lyon, Copenhagen, Seattle, Montreal, Hanoi and Ho Chi Minh City, so Lê brings together jazz, traditional folk music, rock, hip hop, reggae and electronica to create a blend which is surprisingly homogenous. And as regards the influences that have moulded his fellow musicians, Lê explains: "It begins with the diaspora of the Vietnamese artists, who create something of their own by distancing themselves from their roots, but which is nevertheless related to the culture of their past. And from this we develop the dream of universal communication."
An impressive crew of musicians has come together for this project. Lê's basic band for this undertaking consists of two kindred spirits who have worked with him in several previous bands: drummer and percussionist Alex Tran and French vibraphonist Illya Amar. Then there are two young band-members who have been brought in more recently: neo-traditionalist young singer and multi-instrumentalist Ngô Hông Quang, and US-based beatboxer Trung Bao. In addition to the zither player LêThi Van Mai, the flutist Nguyên Hoàng Anh and the percussionist Minh Dàn Môi, Lê also has American star trumpeter Cuong Vu (born in Saigon), who became known above all as a Grammy-winning member of the Pat-Metheny band, plus Danish bassist Chris Minh Doky who has been a permanent fixture in the New York jazz scene since 1989. What all of them deliver could not possibly be described as merely illustrative music. From the very first note of the introductory "Noon Moon" through the seven-part "Overseas Suite" to the final evocation of "Mother Goddess", the listener is immersed in a totally refreshing mix of musical styles, always carried by limpid melodies and compelling rhythms.
"Overseas" is genuinely impressive and affecting because Nguyên Lê has taken the topical theme of migration and also achieved the things that define every great work of art: it is deeply personal and very much of our time – but also universal and timeless.
Nguyên Lê, electric & bass guitars, electronics
Ngô Hồng Quang, vocals dàn nhi fiddle, dàn môi jaws harp, dàn bâu monocorde & dàn tính lute
Illya Amar, vibraphone, MalletKAT, T’rung bamboo xylophone
Trung Bao, beatbox
Alex Tran, percussion & drums
Lê Thi Van Mai, dàn tranh zither
Nguyên Hoàng Anh, bamboo sáo flute
Minh Dàn Môi, dàn do bamboo percussion
Cuong Vu, trumpet
Chris Minh Doky, acoustic bass 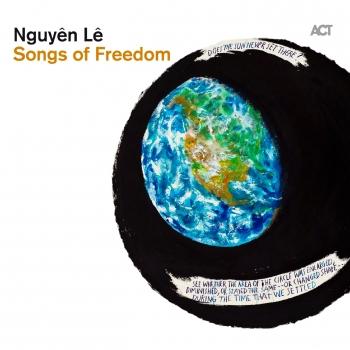 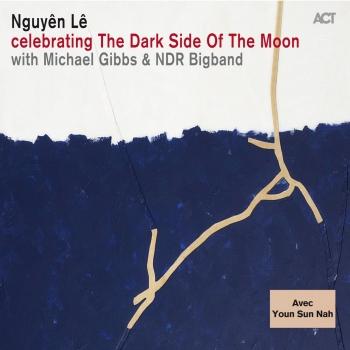 Celebrating the Dark Side of the Moon 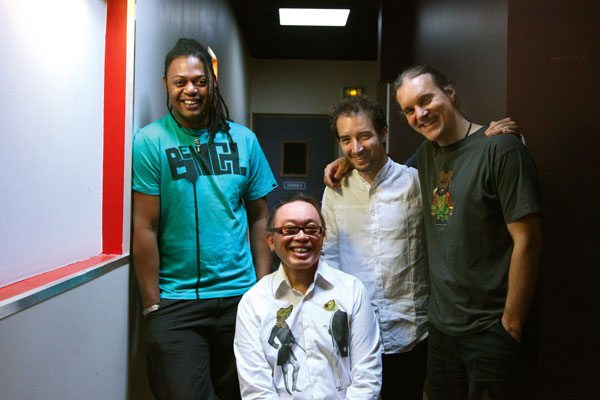