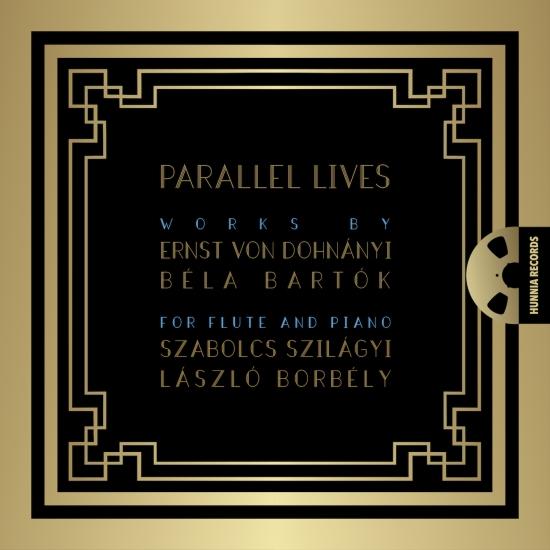 Listening to this album is a unique experience because the recording offers a selection of flute and piano pieces of two worldrenowned Hungarian composers: Béla Bartók (1881−1945) and Ernst von Dohnányi (1877−1960).
The names of Bartók and Dohnányi may seem unusual in a flute and piano programme, since although the latter did have some interest in the instrument in the last years of his life, Bartók did not compose pieces for solo flute or any significant chamber music where the flute was originally included. There might be several explanations for this. Flutist Szabolcs Szilágyi, who formulated the concept of this CD and is also one of the recording musicians, believes that although the German goldsmith Theobald Böhm (1794−1881), patented his new invention revolutionising flute playing already in 1847 1, for various reasons it had not yet become prevalent at the Budapest Academy of Music (Royal National Hungarian Academy of Music, at present: Liszt Academy of Music) where the two composers studied at the turn of the century. Furthermore, the Viennese flutes – also commonly referred to in professional circles as simple system flutes – used in Budapest and in German speaking areas were less suitable for performing complex chamber music or solo pieces, both in terms of their sound capabilities/potential and technical possibilities. Another explanation for Bartók's and Dohnányi’s reluctance may be that neither composer had friendships with remarkable flutists who could have inspired their work, despite the fact that the professor of the Royal National Hungarian Academy of Music as well as the first flutist of the Royal Hungarian Opera House was Adolph Burose (1858−1921). The flutist of German origin was also a much sought-after international soloist and the author of the first Hungarian language flute school, the two-volume Die Neue Grosse Flötenschule2 (the exact date of its publication is unknown). We should not be misled by the German title: the book was published as the study material of the Royal National Hungarian Academy of Music with German and Hungarian instructions. Both were official languages of the Austro-Hungarian Monarchy, and it was only natural that Burose wrote the instructions in his mother tongue. It is also likely that he spoke little or no Hungarian, because in the preface to the flute school he thanks his student, Dr August Alcsuti3 for the Hungarian translation. Burose was extremely broad-minded as it turns out from his work, which includes the fingering chart of both the Viennese and the Böhm systems4 , that he preferred the former. He even recommends specific exercises to practice the fingering of the Böhm system, which implies that he considered the Böhm system a deviation from the “normal instrument”. At this point, however, we have come full circle as we are back to square one, namely the restrictions due to the sound character and level of technical development of simple system flutes.
Mr. Szabolcs Szilágyi at the Sir James Galway Flute Festival 2012, Weggis, Switzerland. "Mr. Szilágyi’s playing of Ernst von Dohnányi : Passacaglia for flute solo OP. 48. No. 2, was an amazing display of complete mastery of the flute. He played this most difficult piece with a perfect technique and a deep understanding of the music. His stage presence charmed the audience who gave him a well deserved standing ova:on.” (Sir James Galway)
Szabolcs Szilágyi, flute
László Borbély, piano