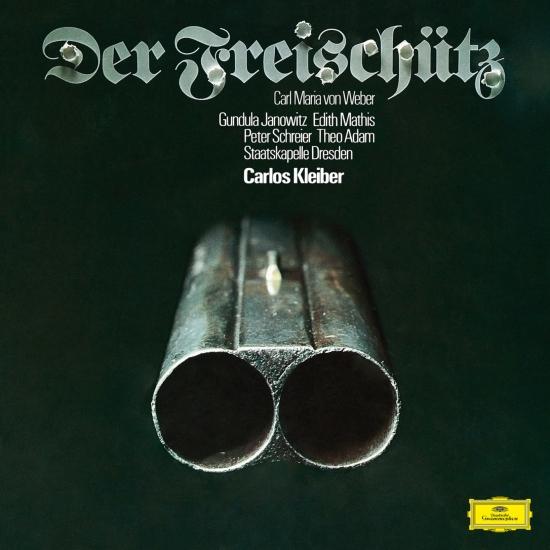 Der Freischütz is one of the great milestones in the history of opera. The resounding success of its premiere in 1821 practically made it a manifesto for German Romantic opera, one that would become a significant formative influence on Wagner. Although it has its roots in the Singspiel tradition exemplified by Mozart's Die Zauberflöte, Der Freischütz cut new ground with its potent mixture of supernatural elements, dreams, folk melodies, evocations of nature, and symphonic tone painting. Here, von Weber exploited his brilliant orchestral imagination--using, for example, carefully divided string tremolos and a gleaming choir of four horns--to maximum effect.
This legendary recording from 1973 was Carlos Kleiber's first studio project, and the scrupulous attention he lavished on the score resulted in an interpretation that continues to sound bold, fresh, and authoritative. The Dresden Staatskapelle plays in top form, whether in tenderly sprung wind solos or in the truly spooky atmospherics of the famous Wolf's Glen scene. Peter Schreier's dark, pungent tenor is something of an acquired taste, but he gives fervent voice to the despair of hunter/protagonist Max. Gundula Janowitz sings with stirring beauty and enriches the two-dimensional character of Max's beloved Agathe with remarkable depth, revealing both her innocence and her agonized foreboding. And Theo Adam delivers a thoroughly spiteful, loathesome vocal portrait of the nefarious Kaspar, whose pact with the devil Samiel goes awry. For a work that is not performed nearly as often as it deserves to be, this recording is essential. (Thomas May)
For sheer thrills, no one has yet outshone Kleiber’s swashbuckling 1973 Der Freischütz. True, for scrupulous textual honesty, there are strong rivals. On Teldec, Harnoncourt underscores Weber’s brilliant instrumental detail, and benefits from not just Orgonasova’s Agathe and Salminen’s brutalising Kaspar, but Cachemaille’s Kuno, Schäfer’s Ännchen and Moll’s Hermit. Some earlier versions have weathered particularly well. Jochum (DG budget price) allows Weber’s miraculous orchestration to ratchet up tension, free of dazzling ‘effects’ (unlike Kubelík/Decca). Keilberth’s 1958 EMI reading, with Prey and Frick, was a yardstick, sharing with Furtwängler’s cough-ridden Salzburg performances arguably the best Agathe of all:Elisabeth Grümmer. But if you can hang in with his tempi (contrast Davis’s granite Philips version), Kleiber win hands down. The Staatskapelle is putty in his fingers. Janowitz’s melting Agathe, Schreier’s assertive Max, Mathis and Adam remain my dream cast. (Roderic Dunnett, BBC Music Magazine)
Franz Crass, bass
Siegfried Vogel, bass
Bernd Weikl, baritone
Theo Adam, bass baritone
Peter Schreier, tenor
Edith Mathis, soprano
Günther Leib, baritone
Gundula Janowitz, soprano
Leipzig Radio Chorus
Dresden Staatskapelle
Carlos Kleiber, conductor
Digitally remastered