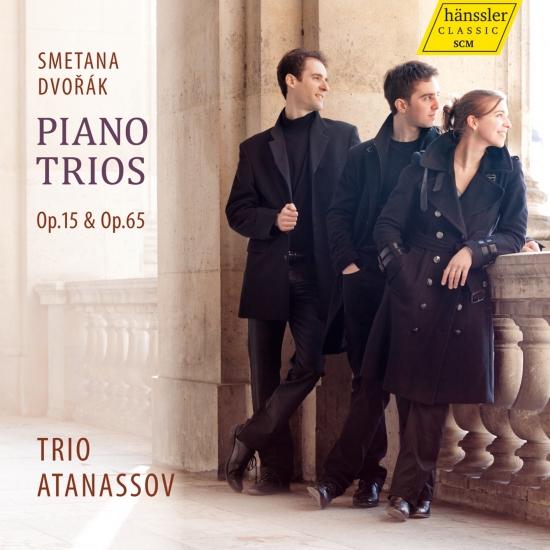 „Despite its Eastern European name, the Trio Atanassov is French and is an exciting new presence on the chamber music scene there. This pair of Czech trios shows why: they are interpretively fresh, passionate, and accurate. The pairing of works may be the main attraction for many buyers; Smetana's highly emotional Piano Trio in G minor, Op. 15, is very often paired with the ubiquitous Piano Trio in E minor, Op. 90 ("Dumky"), of Dvorák, but here instead you get the much less common Piano Trio No. 3 in F minor, Op. 65, composed in 1883. You can see why it has been neglected: its large opening movement seems to be trying too hard to match Brahms' example, and though it is intricately constructed it lacks a killer tune. The informative booklet sheds light on why this might have been: Dvorák's opera Dimitri, Op. 64, had just been slammed by Viennese critic Hanslick, who told the Czech composer that he had been "unduly influenced by the joy of [his] Bohemian brothers," and that only Germany could help him! As it happens, the other three movements are the absolute height of Dvorák charm (try especially the Trio of the Scherzo, track 5), and the Trio Atanassov delivers the kind of relaxed precision that makes for an optimal performance of these enchanting little tunes. The Smetana as well is intelligent and very affecting. The group avoids the over-the-top emotionalism that infects some performances of this work and gives the proper weight to the music's hard-won moments of repose. The only real complaint here is the sound: the environment of Berlin's Festeburgkirche is too live for the chamber dimensions of the music, and there's unnecessary instrument noise. As for the Trio Atanassov, though, this is a chamber group to watch.“ (James Manheim, AMG)
Trio Atanassov 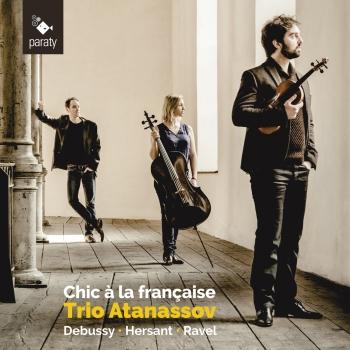 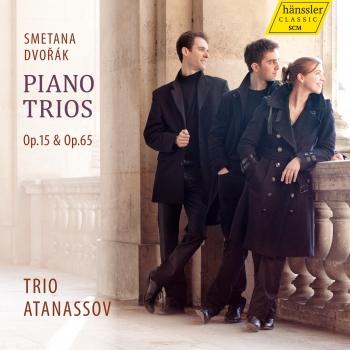 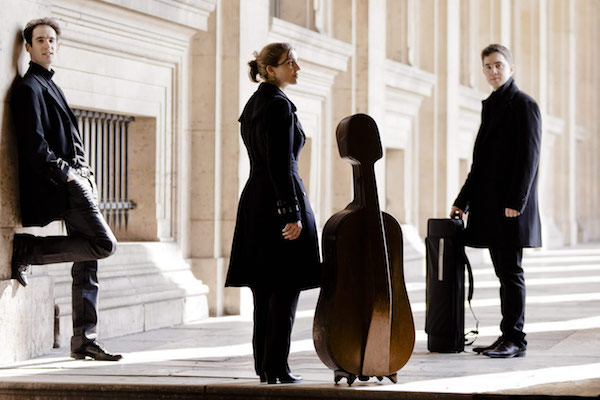 Trio Atanassov
Besides winning the 2010 International Commerzbank Chamber Music Competition in Frankfurt and the 2015 “Franz Schubert and Modern Music” Competition in Graz, the Trio Atanassov has been awarded numerous other prizes in major piano trio competitions around the world, including the Osaka International Chamber Music Competition in Japan, the Trondheim International Competition in Norway, the Haydn Competition in Vienna, the Joseph Joachim International Chamber Music Competition in Weimar, the Vibrarte Competition and the FNAPEC Competition in Paris.
Although successful as soloists, the musicians decided to found the Trio in 2007, after they graduated from the Conservatoire National Supérieur de Musique de Paris. The Trio has been a member of the European Chamber Music Academy since June 2008 and has been particularly marked by the musical influence of its artistic director, Hatto Beyerle. The trio attended many other masterclasses and could get the advice of musical masters such Ferenc Rados, Menahem Pressler, Ysaye Quartet, Hagen Quartet, Jean Paul Trio, etc. The Trio Atanassov has also won recognition from the critics: "...talent, enthusiasm and an unusually strong artistic collusion." (Le Journal de Saône-et-Loire) "An always controlled interpretation, technically sure from every point of view" (Frankfurter Allgemeine Zeitung)
The Trio Atanassov is now one of France’s most prominent young ensembles, regularly touring France and throughout the rest of Europe.
The Trio released its first CD in 2013 (Smetana & Dvorak, Hänssler Classic). This recording met with great critical acclaim, was elected "France Musique's Choice", and was awarded a DIAPASON D’OR.
In 2016, the trio will be on the roads of France, Belgium, Germany, Switzerland and Italy : Contemporary Music Society of Lausanne - Festival international de Colmar - Septembre Musical de l’Orne - Estivales de Musique en Médoc - Festival Estival de Trélazé - Festival du Vigan - Rencontres musicales ProQuartet ... 2017 will see the trio's debut in the Vienna's Musikverein, and the release of a new album (with the label Megadisc Classics), dedicated to the armenian composer Vache Sharafyan.
Offering a fresh outlook on the piano trio: Extending from Haydn trios to the newest works of the 21st century, the repertoire of the trio Atanassov covers a vast period of time and spreads over a wide range of musical traditions.
Emphasis is placed of course on the main works from the long history of this venerable instrumental setting (Haydn, Mozart, Schubert, Mendelssohn, Schumann, Dvorak, Brahms, Ravel), but the piano trio has kept fascinating composers over the years – a series of outstanding works were composed during the last decades, the strong originality of which breathed new life into the old model.
Thus, imaginative and full of personality, the trio Atanassov perpetuates and freshens up the tradition of piano trio by putting forward unique compositions that cross cultures and have their roots in the most various musical influences.