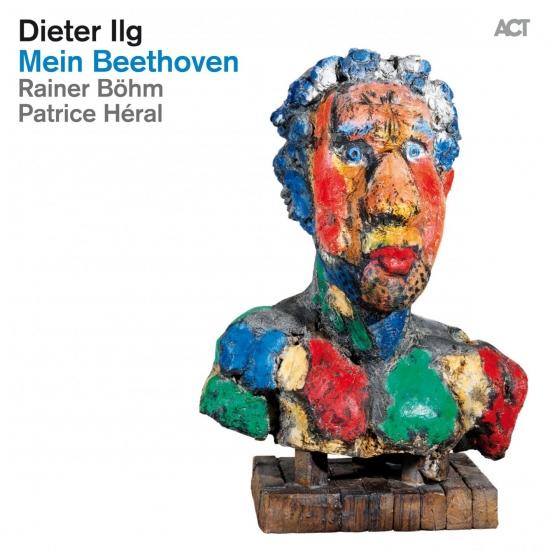 'Mein Beethoven' is the logical next step for Dieter Ilg. His last album 'Parsifal' – a chamber-jazz interpretation of Richard Wagner's sacred festival work, which Focus magazine called a 'highlight in the Richard Wagner Year 2013' – closed with a whispered theme from Beethoven's Ninth ('Ode to Joy'), retitled 'Sehnsucht' (Longing) by Ilg. Now he has satisfied that yearning and recorded an entire album, 'Mein Beethoven', dedicated to this Olympian of German classical music, the most classical of all our composers, the one-time 'superstar of the music capital Vienna': Ludwig van Beethoven.
The choice to do so was not only logical in view of the connection to its preceding album, but also with regard to the career of Ilg, who is not only 'one of the best jazz bass players of our time' (Fono Forum), but also a musician who keeps raising the bar for bandleaders everywhere. Ilg has earned his ranking as a partner to Randy Brecker, Nguyên Lê, Dave Liebman, Albert Mangelsdorff, Dhafer Youssef, Rebekka Bakken, Nils Landgren or Charlie Mariano and currently as the duet partner of Till Brönner and a member of star baritone Thomas Quasthoff's jazz ensemble. With his own projects he has explored his personal cultural roots in the European music tradition. In 1992 he was involved in the revolutionary flamenco-jazz experiment 'Jazzpaña', the Grammy-nominated first ACT album. From 1997 onwards he worked on folksongs together with Wolfgang Muthspiel and Steve Argüelles. In 2010 he fulfilled his long-held dream of eking out the jazz possibilities of Guiseppe Verdi's 'Otello' in the trio that still exists today with Rainer Böhm and Patrice Héral. It was a showpiece of improvisational art music for which he was awarded the ECHO Jazz as 'Best Bassist National'. The 'Live at Schloss Elmau' version was the starting gun for Ilg's collaboration with ACT, and it was followed by the Wagner gamble 'Parsifal', 'a chamber musical, acoustic jazz opus' (Spiegel Online), for which he received his second ECHO Jazz in 2014.
With 'Mein Beethoven' Ilg, along with his perfectly harmonising trio, demonstrates that he is not about gimmicky 'jazz goes classic' crossover music, but about taking the originals and somehow making them his own. His incorruptible eye for the essence, his mastery of making the monumental sensual and human, is impressive.
It is not only Ilg's singing, grooving bass, savouring every nuance, that makes his Beethoven arrangements such a joy to behold, it is also Reiner Böhm's sparkling touch, his pianistic greatness in respectfully playing around some of the most beautiful melodies in music history, and Patrice Héral's ability to always add orchestral splendour through his extraordinary drumming, with fitting fills and variations.
Is it jazz? Or is it not simply wonderful music, enchanting, flowing, dreaming, condensing, singing, relating, grooving….? It is a synthesis that will make Ilg's 'Mein Beethoven' your Beethoven.
Dieter Ilg about the project: Ludwig van Beethoven, born in 1770 in Bonn, first attained notoriety as a pianist, and especially for his passion for improvisation. Always searching for ways to optimise, to further develop music, to form and achieve perfection, he wanted a composition to grow with all the abilities of its creator, changing constantly. Throughout the course of his career his reputation as a composer grew year on year, then ultimately, in the music capital Vienna, he finally rose to the status of what we would today call a superstar. His works are revolutionary milestones. The quiet and monumental moments in his 9th Symphony, his romantic and masterfully demanding piano sonatas and their form breaks, the impetuous eruptions, rough edges and redesigns of the structure of his string quartets, and his elegant and unconventional arrangements of Irish folk songs all fascinate, to mention just a small fraction of his oeuvre. They are ingenious templates for experimentation, even in the 21st century, and Beethoven is undoubtedly one of the great improvisers of Europe’s music history, approaching everything with passion, imagination and the will to create something new. Without Beethoven, today’s music would sound different – it’s jazz too. Rainer Böhm and Patrice Héral accompany and guide me through the formative oceans of Beethoven’s world. Together with them I want to transport Beethoven’s musical expression to the modern day in the true tradition of the man, with a will to in some way make it my own. I can’t think of any place I would rather sail right now. My Beethoven.
'A feast for the ears, not only for hard-core jazz fans, but for all those who love music.' (Thomas Quasthoff)
Dieter Ilg, bass
Rainer Böhm, piano
Patrice Héral, drums
Recorded by Adrian von Ripka, September 1 & 2, 2014 at Tonstudio Bauer, Ludwigsburg
Mixed by Adrian von Ripka
Mastered by Christoph Stickel at MSM
Produced by Dieter Ilv
Executive Producer: Siggi Loch 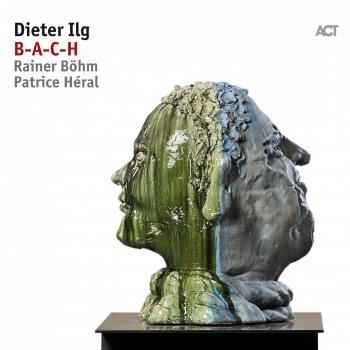 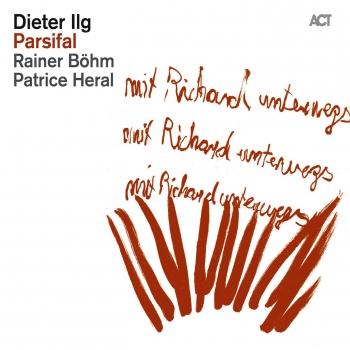 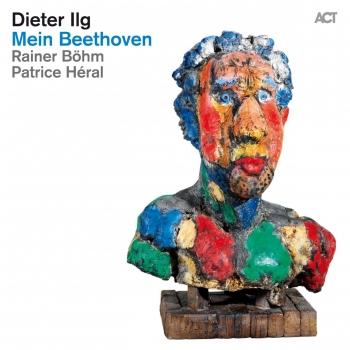 Dieter Ilg
is regarded today as one of a handful of European musicians who make their unmistakable musical style a valuable contribution to the projects they work on. Whether it is as a internationally well-respected sideman or as band leader of his own ensembles: Ilg always combines the quality of the bass as a musical foundation with a graceful ease and expression that is rarely heard on a technically difficult instrument such as the double bass.
It is sometimes assumed that there are two kinds of bass players: those who 'groove' and accompany (serving mainly as a rhythmic presence) or those who - freeing themselves of the serving role - strive to explore their artistic heights as a soloist (displaying their versatility as virtuoso improvisers). Unlike many Dieter Ilg combines the two ends of this spectrum.
His versatile, individual, passionate and tasteful voice has become a valuable contribution to the international jazz arena.
At the age of six Dieter Ilg – then an experienced recorder player (in kindergarten) - learned to play the violin and the viola before deciding to play the double bass at the age of thirteen.
After four years of lessons at the music school in his home town Offenburg Ilg went on searching for new teachers. He studied with Norbert Brenner ( solo double bass player of the SWR Orchestra Baden-Baden) and later on attended Jazz courses in Burghausen, Remscheid and Tübingen, working with a wide variety of instructors and professionals.
From 1981 until 1985 Ilg refined his practical skills as well as his theoretical knowledge with Prof. Wolfgang Stert at the Musikhochschule Freiburg. Winning the Fulbright scholarship then enabled him to study at the Manhattan School of Music in New York City (1986/1987).
At this time he was already skilled enough to understand the art of musical structure as it was conveyed to him by such masters as Eddie Gomez and Miroslav Vitous. It was also then that he made his further experiences on the stage as a member of the Joe Viera Sextett (1981 - 1984) as well as with his first trio-project, co-founded with Klaus Ignatzek. Not before long he had built up a busy schedule performing with such players as Bobby Watson, Roman Schwaller or David Liebman.
It was Liebman who significantly influenced Ilg's decision to stay on in New York for a while when he invited him to join the John Coltrane Memorial Concert in NYC in January 1987. The future began to look exciting.
Seizing the moment Ilg founded his first Trio with guitarist John Schröder and drummer Wolfgang Haffner shortly after returning from New York. He also became a member of the Randy Brecker Quintet. Suddenly things were on a roll and he was awarded with the Baden-Württemberg Jazz Prize. The press said:
The brilliance and expression of his tone, the originality in the concept of his ensemble and his individual approach to harmony are fascinating.
Regular performances with the WDR Big Band, frequent tours in europe (for example a tour of Spain with Bennie Wallace ) and a new line up to his own trio - this time including pianist Marc Copland - is what followed. These collaborations resulted in the production of three CD's featuring drummers Bill Stewart, Ralph Penland and Jeff Hirshfield.
The 90's were a time of musical friction as well as for making decisions.
Daily business on one hand went well:
Since 1991 Ilg had toured with Germany's renowned Jazz formation, the Mangelsdorff/Dauner Quintet. The Goethe Institute sent him round the world playing with Christof Lauer and the working relationship with Copland had resulted in evermore interesting facets of sound. Ilg ventured into worldmusic and jazz-rock with the French-Vietnamese guitarist Nguyên Lê and drummer Danny Gottlieb, also the list of performances as a sideman kept growing longer and longer.
The only thing missing was the kind of recognizable and characteristic project that comes straight from the heart.
In searching for music that represented his roots Ilg finally found what he had been looking for in his work on Folk Songs (1997), Fieldwork (1998) and LIVEILG (2001).
The idea was a simple and obvious one: where else - other than your own native country - would you discover your cultural origins?
Ilg began exploring and arranging old German folk songs with his musical companions Wolfgang Muthspiel on guitar, Steve Argüelles on drums and – to begin with - Benoit Delbecq on piano.
The project was a huge success and toured for four years - so much so that in the end even the musicians themselves nearly got bored with songs like Im Märzen der Bauer and Winter Ade.
At last the German press caught attention and Dieter Ilg was recognized in his home country as the instrumental master that he was.
Still - even at this point labeled as a newcomer - he already brought new talent under way teaching at the Musikhochschule Freiburg (1995 - 1997, 2001ff).
It was European cuisine amongst other things and a woman that prevented him from locating in the USA permanently.
He developed a passion for culinary pleasures of a certain standard, which now has become a personal character trade. He gained a reputation as a chef and goutier, his recommendations for restaurants were highly esteemed and a 'dinner at Dieter Ilg's' achieved cult status.
When this became known to the magazine Jazzthing it offered him a regular column. Apart from his love for regional cuisine (Southern Germany as well as Italy and France) Ilg is a passionate supporter of Volker Finke's soccer concept. Finke worked succesfully for the SC Freiburg for 16 years, then followed by a two year stint at Urawa Red Diamonds in Japan and in 2011 an upcoming period as „manager of sports“ for german, traditional club 1.FC Köln.