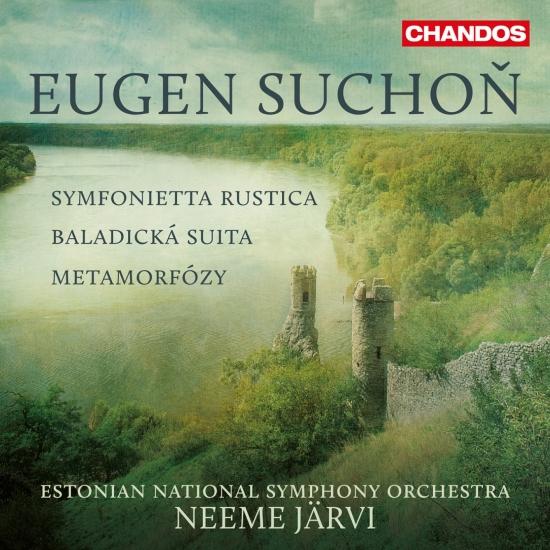 Although his music is rarely performed nowadays, Eugen Suchon was the most influential and respected Slovak composer of the twentieth century. Three of his greatest symphonic works are performed here by the Estonian National Symphony Orchestra and its artistic director, Neeme Järvi. The works were composed during the years which Suchon spent in Bratislava, where he turned his interest to the origins of Slovak folk music and to extended tonality.
In the four-movement Baladická suita (Balladic Suite), of 1935, Suchon incorporates some Slovak folk elements and demonstrates his mastery of orchestration in an almost impressionist piece of great power and vitality.
Written in 1953, the Metamorfózy (Metamorphoses) reflects the composer’s own impressions during the war years, from a relatively tranquil pre-1939 to more disturbed wartime emotions in the Allegro moderato, the last two movements respectively peaceful and triumphal.
If the Symfonietta rustica, completed in 1956, opens with some lyrical and rhapsodic elements recalling the Metamorfózy, this rustic work, adapted from the earlier Sonata rustica for piano, shows what the composer had achieved through his experiments in the modality of Slovak folk music.
Winner of two Grammy Awards, in 2004 and 2010, the Estonian National Symphony Orchestra is the longest continually operating professional orchestra of its kind in Estonia and tours all over the world.
"Neeme Järvi clearly believes in this music, and his Estonian musicians attack it with gusto. We often get fine recordings of minor or forgotten composers who turn out to be capable technically, but bland at heart. This is not the case with Suchon, whose work exhibits blazing color and urgency, at least on the strength of this highly recommended recording." (Phillip Scott, Fanfare)
“... this is consistently gorgeous music. The melodies (including ones distilled from indigenous sources) are, whether jubilant or elegiac, noble and shapely; the harmonies are positively ambrosial; and the orchestration is voluptuous yet transparent, packed with dazzling filigree – a spider-web-delicate sprinkling of celeste or piano there, a lovely oboe melody threading through shimmering strings there When everyone and everything works to perfection, as they do here, the result can be a marvel. I recommend this to all who love symphonic panoply at its grandest. It’s hard to imagine a more ideal presentation of Suchon’s sumptuous musical tapestries.” (Mark Lehman, American Record Guide)
Estonian National Symphony Orchestra
Neeme Järvi, conductor