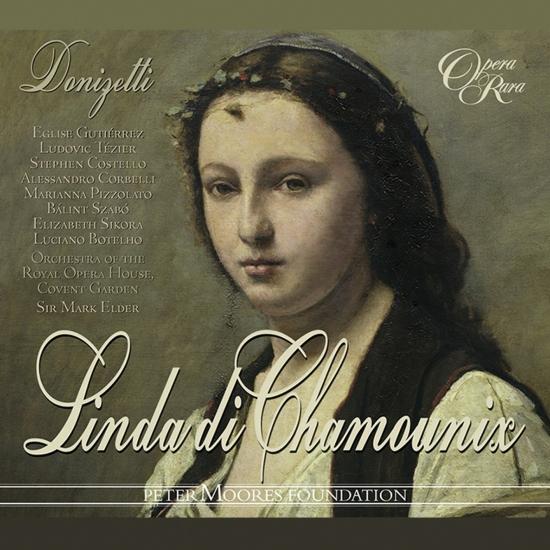 One of the biggest successes of Donizetti’s career, Linda di Chamounix was performed all over the operatic world in the decades following its 1842 Viennese premiere, then fell into neglect. The live concert performances recorded by Opera Rara at Covent Garden, in 2009, were its first there since 1887.
This is one of Donizetti’s finest achievements, aimed at the musically sophisticated Viennese public and featuring some of his best arias, ensembles and choruses, including the brilliant soprano showpiece ‘O luce di quest’anima’; in this semi-seria opera this much-admired aria is sung by Linda (Eglise Gutiérrez), who has fallen in love with Carlo (Stephen Costello – a recent Richard Tucker Award winner) believing him to be a painter, though he is in reality a nobleman. Packed off to Paris to stop her falling into the clutches of his uncle, the dubious Marchese de Boisfleury (Alessandro Corbelli), Linda is discovered in compromising circumstances by her father Antonio (Ludovic Tézier), who curses her, causing her to lose her reason. Supported by the loyal Pierotto (Marianna Pizzolato), Linda returns to Chamounix and sanity and, eventually, to the arms of the man she loves. Sir Mark Elder conducts the recent critical edition of this outstanding score.
The 3-album set comes with a lavishly illustrated book including a complete libretto with an English translation, comprehensive article and synopsis by the eminent 19th-century musical scholar, Jeremy Commons.
"Mark Elder's conducting is punchy and delicate by turns, the chorus and orchestra responding to his vigilant control of dynamics...The best performance comes from Alessandro Corbelli, in a part that could have been written for him. Ludovic Tezier spins a beautiful proto-Verdian line as Linda's father, and Balint Szabo is his equal ...As a whole the performance does the composer proud." (Gramophone Magazine)
"Alessandro Corbelli, seasoned as he is, is in his element...As they are so good, it would be unfair to say that Gutierrez rises above her colleagues, except in range, but her singing deserves full praise...Stephen Costello produces a clear voice, without strain and well supported...The chorus, orchestra and conductor join the singers in making this a set to captivate bel canto enthusiasts." (International Record Review)
"[Elder] infuses the whole performance with conviction, right from the rather impressive overture...All the singers are up to their roles, and the playing of the orchestra is bold; even the most conventional passages sweep you along. This opera has been recorded before, but not to this standard. It's hard to imagine this set ever being replaced, or even rivalled." (BBC Music Magazine)
Eglise Gutierrez, soprano
Ludovic Tézier, baritone
Elizabeth Sikora, mezzo-soprano
Alessandro Corbelli, baritone
Stephen Costello, tenor
Marianna Pizzolato, mezzo-soprano
Balint Szabo, baritone
Luciano Botelho, tenor
Royal Opera Chorus
Royal Opera House Orchestra
Covent Garden
Sir Mark Elder, conductor