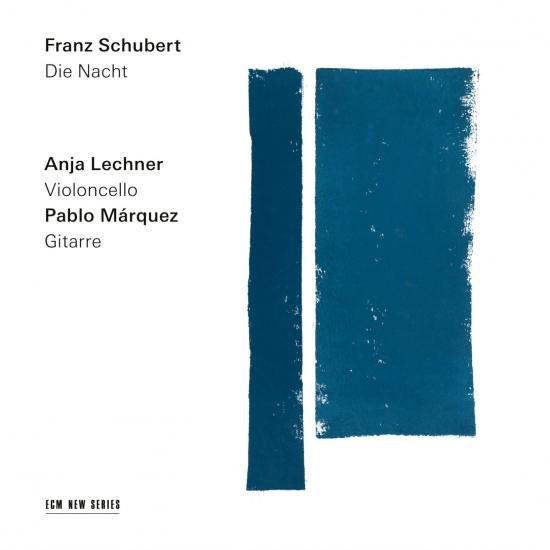 German cellist Anja Lechner and Argentinean guitarist Pablo Márquez met in 2003 and have since explored the most diverse repertoire and modes of expression in their concerts. For their first duo album, a conceptual context is provided by the strong tradition of songs with guitar accompaniment prevalent in 19th century Vienna, as Lechner and Márquez play some of Schubert’s most beloved songs (including Die Nacht, Nacht und Träume and Der Leiermann), elegantly framing the album’s centrepiece: Schubert’s expansive ‘Arpeggione’ sonata. Many of Schubert’s songs were published in alternative versions with guitar during the composer’s lifetime; in some cases, the guitar version appeared even before the one for piano. Interspersed on the recording, as an echo and commentary to Schubert’s spirit and language, are the graceful Trois Nocturnes originally written for cello and guitar by Friedrich Burgmüller (1806-1874). Die Nacht is issued as Lechner and Márquez embark on a European tour with concerts in Germany, Austria, France, Hungary and Romania.
“Art does not reproduce the visible but rather makes things visible.” This statement of Paul Klee’s, from his Creative Confession of 1920, is valid not only as a watchword of modernity; for the Romantics, too, stirred themselves to render visible what is often hidden from us, appearing at most as an emotion.
Schubert’s music offers a particular instance. His works poeticize whatever is real, allowing reality to become dream and , by means of music, the dream of a better world to become reality. All that is earthly is metamorphosed into a function of soul and spirit. Themes such as night, aloneness, silence and longing are the fundamental leanings not just of the composer’s songs but of his soundscapes generally.
For the cellist Anja Lechner, Schubert’s music has been an aesthetic lodestar since childhood, when she became familiar with the songs and piano works in the parental home.
From the early 1990s on, the Rosamunde Quartett, of which she was a founding member, delved deeply into Schubert´s quartets and late quintet alongside a spectrum of repertoire from Haydn to the modern day. Since the quartet disbanded in 2009, she has made a name for presenting programmes that bridge styles and cultures, numerous composers entrusting her with the first performances of their works.
For Die Nacht she has returned to her early passion: the music of Schubert. Completely in the spirit of the composer, whose compositions were to be performed principally in private among friends, she and the Argentinian guitarist Pablo Márquez have recorded a programme that gives the feeling of a musical dialogue taking place in Schubert’s house.
Playing song accompaniments on the quieter guitar instead of the piano, strengthens the impression of intimate music-making. Moreover, singing to the guitar was a widespread practice in the 19th century. Some of Schubert´s songs, who also played the guitar, were, already during his lifetime, published in arrangements for the instrument. The song arrangements in the present recording (with the exception of ‘Der Leiermann’ and the Romance from Rosamunde, which Anja Lechner and Pablo Márquez have themselves newly transcribed) come from manuscripts found in the collection of the Bohemian poet Franz Xaver Schlechta von Wschehrd, who belonged, together with Franz von Schober and the brothers Spaun, to the innermost circle of Schubert’s friends.
At the centre of the recording, alongside five songs and the romance, stands the Sonata in A minor, D. 821, originally written for, and subsequently named after, the arpeggione. Almost forgotten today, this instrument, often referred to as a guitar d’amour or bowed guitar, is customarily replaced by the cello, and is so here, while the transparent piano part has been subtly arranged for guitar. Three nocturnes, originally composed for the cello/guitar combination by a Schubert contemporary, Friedrich Burgmüller, add a gentle echo to the music of Schubert.
The album is Anja’s Lechner first purely classical recording since that of Haydn’s Seven Last Words, Hob. XX:2, with the Rosamunde Quartet in 2001.
Anja Lechner, violoncello
Pablo Márquez, guitar