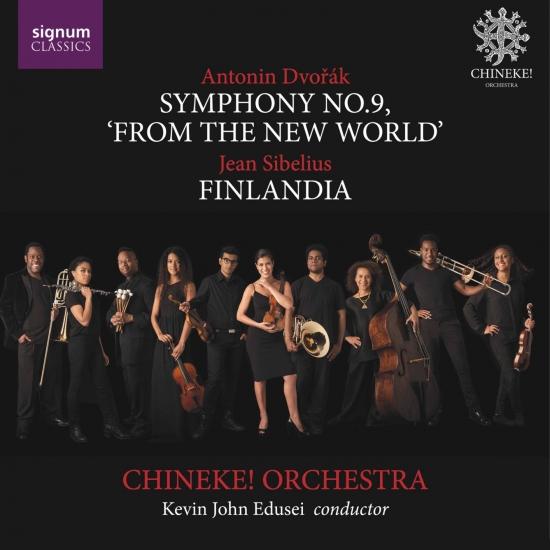 Info for Dvořák: Symphony No. 9, From the New world - Sibelius: Finlandia

Signum are proud to present the debut recording from the Chineke! Orchestra, in a new live orchestral recording from The Royal Festival Hall, London.
Drawn from exceptional musicians from across the continent, the orchestra is part of the Chineke! Foundation – a non-profit organisation that provides career opportunities to young Black and Minority Ethnic (BME) classical musicians in the UK and Europe. Their motto is ‘Championing Change and Celebrating Diversity in Classical Music.
The orchestra is the brainchild of Chi-chi Nwanoku MBE, FRAM, who describes the project’s aim as being “… to create a space where BME musicians can walk on stage and know that they belong, in every sense of the word. If even one BME child feels that their colour is getting in the way of their musical ambitions, then I hope to inspire them, give them a platform, and show them that music, of whatever kind, is for all people.”
In this first release in a new series, Chineke! orchestra perform two beguiling works – Sibelius’s Finlandia and Dvořák’s much loved Symphony No. 9 ‘From the New World’. Both pieces encompass different aspects of BME influences in Western Classical music: Sibelius’s Finlandia embodied a national sentiment in both the composer’s homeland of Finland as well as for other small nations seeking to free themselves from subjugation from other countries (becoming the national anthem of Biafra during the civil war of 1967-1970), and although underplayed by critics at the time, Dvorak’s work rings with melodies influenced by the folk music and spirituals sung to him by his African- American student and assistant, Harry Burleigh, and with rhythms and pentatonic sections inspired by the music of the Sioux Indians, all wrapped up in the format of a Western Classical symphony.
Chineke! Orchestra
Kevin John Edusei, conductor 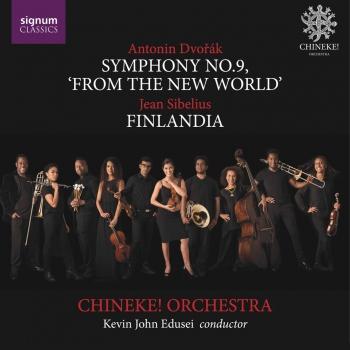 Dvořák: Symphony No. 9, From the New world - Sibelius: Finlandia 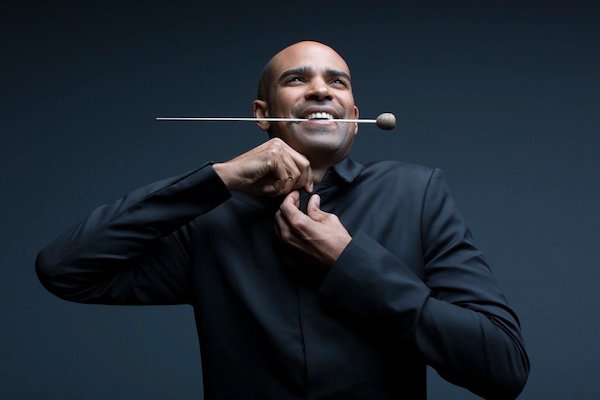 Kevin John Edusei
is one of today's most promising young conductors. With an exceptionally wide ranging repertoire from baroque ot contemporary music. Edusei is known for his delicate, clear conducting, which creates space for new nuances.
He first attracted international attention in 2008 when he won the first prize of the prestigious "International Dimitris Mitropoulos Competition" in Athens. Since the season 2014/2015 he brings exceptional new vision to the Münchner Symphoniker as their chiefconductor. Starting in the season 2015/16 he also acts as chiefconductor at the Konzert Theater Bern where he succesfully continues his artistic collaboration.
As a guest conductor he has been invited by European orchestras as the Deutsches Symphonie-Orchester Berlin, the St. Petersburg Philharmonic, the Konzerthaus-Orchester Berlin, the Residence Orchestra The Hague, the Düsseldorfer Symphoniker, the Mozarteumorchester Salzburg, the Tonkünstler-Orchester Wien, the Wiener Kammerorchester and the Ensemble Modern Frankfurt among others.
In the year 2009 he gave his successful debut with the Staatskapelle Dresden leading a series of performances of Die Entführung aus dem Serail at the Semperoper Dresden. In march 2010 he stepped in for maestro Fabio Luisi on short notice to take over Paul Hindemith's Cardillac which was highly praised by the press. In 2013 he will present himself to the Viennese audience with Mozart's Magic Flute at the Volksoper Wien. Further engagements in the season 2012/13 included the Landestheater Innsbruck and the Konzert Theater Bern where he subsequently held the position of 1st guest-conductor.
In Bern he conducted the acclaimed productions of Richard Strauss`Ariadne auf Naxos, Salome and Benjamin Britten's Peter Grimes.
During the seasons 2004 until 2011 he held the position of 1. Kapellmeister and associate General music director at the opera houses of Augsburg and Bielefeld, Germany. Highlights of his work in the field of opera were his acclaimed renderings of Fidelio, Don Carlos, Aida, Madama Butterfly, La Bohème, Le nozze di Figaro, Die Zauberflöte, Il barbiere di Siviglia, Lucia di Lammermoor, Orfeo ed Euridice, Adriana Lecouvreur, Der ferne Klang and Tristan und Isolde.
He was one of the three winners of the 2007 Lucerne Festival's conducting competition under the artistic direction of Pierre Boulez and Peter Eötvös to conduct Karlheinz Stockhausens opus magnum Gruppen für drei Orchester. Furthermore Kevin was awarded the "Dirigentenforum" stipend of the German Music Council, the fellowship of the International Ensemble Modern Academy and the stipend of the Deutsche Bank affiliated organization "Akademie Musiktheater heute".
Kevin John Edusei received important artistical guidance from maestros Kurt Masur, Jorma Panula, Sylvain Cambreling and Peter Eötvös. During the Aspen Music Festival 2004 maestro David Zinman awarded him the fellowship for the American Academy of Conducting which gave him the possibility to work with distinguished artists as Leon Fleisher, Julius Rudel, David Robertson and Michael Stern.
Chineke!
is the world’s first professional black and minority ethnic symphony orchestra, drawing on talented players across Europe and championing the music of BME composers past and present alongside great works of the classical canon. Its Snape debut includes African-American George Walker and the black British composer Samuel Coleridge Taylor – best known for his choral cantata Hiawatha’s Wedding Feast. The outstanding rising star, BBC Young Musician of the Year Sheku Kanneh-Mason offers virtuoso rarities, Trinidadian soprano Jeanine De Bique sings Handel and the evening concludes with one of the great orchestral showpieces, Rimsky- Korsakov’s riotously colourful Spanish fantasy.

Booklet for Dvořák: Symphony No. 9, From the New world - Sibelius: Finlandia