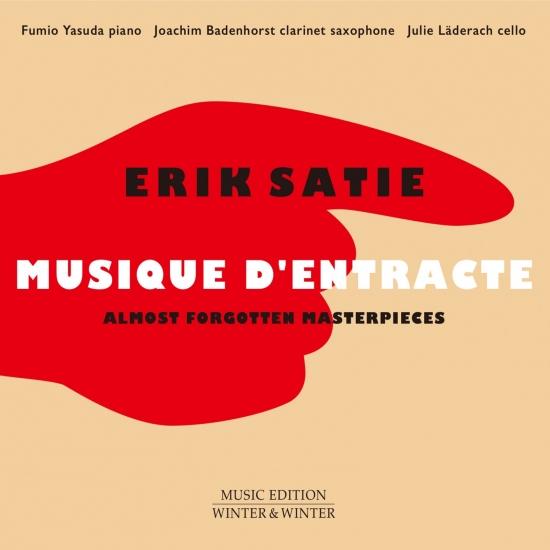 On the occasion of Erik Satie’s 150th birthday, Fumio Yasuda embarks on a quest for hidden works of music and adapts rarely performed compositions for his piano trio: pieces that are well worth their discovery! Following a tour through Spain and France, Yasuda recorded this album in Bordeaux in October 2016.
In the early 20th century, Erik Satie was part of the Dadaist circle of artists in Paris. He worked with René Clair, Pablo Picasso, Georges Braque, Léonide Massine, Man Ray and, most importantly, Jean Cocteau. Fumio Yasuda selected Satie’s music for René Clair`s film masterpieces “Entr’acte” as well as the works “Dance de travers” and “Airs à faire fuir” from “Pièces froides” and several additional compositions to arrange and interpret them in a completely new style. Satie has an entirely different view from many of his colleagues: He is convinced that a composer has no right to waste the time his audience dedicates to him. And so he develops his idea of background music – and calls it “Musique d’ameublement” (which translates approximately as “Music as furniture”, or “Musical furniture”). Music is meant to be in a room just like a table or a chair. Satie rejects finesse and virtuosity. “Everyone will tell you that I’m not a musician. And they’re right.” Satie has a very special place in the history of music.
Fumio Yasuda, composer and pianist, is comfortable both with the world of New Music and with jazz. His repertory includes piano concerts, accordion concerts written for Teodoro Anzellotti, solo pieces for piano and compositions for chamber orchestra. On the other hand, Fumio Yasuda performs with his jazz trio and bass player Nobuyoshi Ino who has worked with Lester Bowie, Elvin Jones and Kazutoki Umezu. Fumio Yasuda also writes scores for films and installations created by Japanese photographer Nobuyoshi Araki. In 2017, Stefan Winter commissioned
Fumio Yasuda to adapt works by Fauré for the sound and 3-channel video installation “Poem of a cell” and to write new music.
Fumio Yasuda selects a piano trio with clarinet and cello to realise Erik Satie’s music, thus creating a piano trio that is very special and has a very particular sound. In 2015, he met the Belgian saxophone player and clarinettist Joachim Badenhorst in Tokyo, and the two musicians began their collaboration shortly after their initial meeting. The piano trio is completed with the inclusion of French cellist Julie Läderach, a musician with a classical background who already contributed to the Winter & Winter recording for Werner Herzog’s soundtrack of Ernst Reijseger’s “My son, my son, what have ye done”. Yasuda’s adaptations leave space for improvisation: the in-music of the 1920s in Paris comes to new life and presents a recording with “Musique d’entracte” that features little played compositions by Erik Satie in a new instrumental combination.
The three musicians work together like a classic chamber music trio. However, in this trio, cellist Julie Läderach assumes the role of the classic interpreter, Joachim Badenhorst adds improvisation to the music and Fumio Yasuda is the connecting element for those two separate worlds. Three different, independent voices engage in a dialogue; Yasuda interprets Erik Satie’s music in his very unique manner, enhances the harmonies in his sensitive way, creates a special listening experience with cello, clarinet and piano, and opens Satie’s compositions to improvisation. For some pieces, Yasuda selects a “prepared piano”, which is specially equipped with a thick cloth and metal nuts and bolts to obtain a particular sound.
Erik Satie wrote a couple of pieces for the film “Entr’acte”, featuring Francis Picabia, Erik Satie, Man Ray, Marcel Duchamp, Jean Borlin (the choreograph of the Ballet Suédois), Georges Auric and René Clair in cameo appearances, which Fumio Yasuda includes into his album “Musiqu d’entracte”.
Without seeming obtrusive, Fumio Yasuda bows to Erik Satie and shows his respect for the great master, who so often is little appreciated since his compositional style is misunderstood or his oeuvre reduced to a few popular pieces. For many listeners, some pieces will be a new discovery, thanks to Fumio Yasuda’s selection.
Fumio Yasuda, piano, prepared piano
Joachim Badenhors, clarinet, bass clarinet, saxophone
Julie Läderach, cello, voice