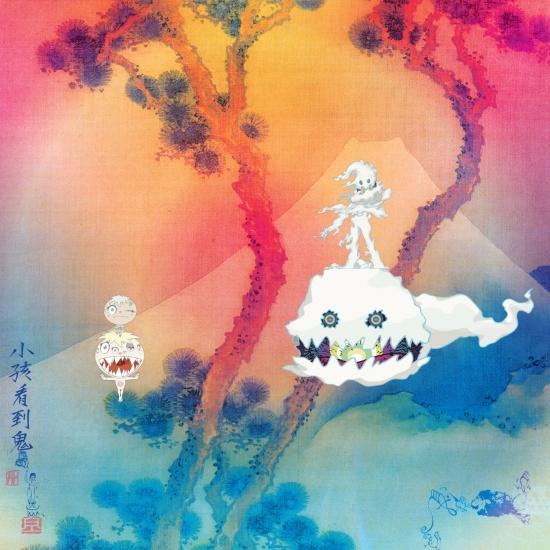 The seven-track release has the same minimalist ethos of ye but sounds completely different, featuring more polished, haunting production and some surprising musical samples, as well as features from Pusha T, Ty Dolla $ign, and Yasiin Bey (fka Mos Def).
The music swings between scary, intense moments, like the aggressive scatting from Kanye on industrial opener 'Feel The Love', to spooked, meditative material, like the eerie title track and soothing self-motivation of a song revolving around Cudi's mantra to "keep moving forward".
Sometimes Kanye and Cudi (Cudye?) capture both those sides in one song, like the rattling drums and vocal harmonies of a track where Cudi sings "I'm free", which feels like a shadowy counterpart to Kanye & Cudi's ye precursor 'Ghost Town'. Surprisingly, one track is constructed around the grimy guitar of 'Burn The Rain' by Kurt Cobain, taken from the legendary Nirvana frontman's compilation of home recordings, Montage of Heck. Another, '4th Dimension' is built around a flipped sample of 'What Will Santa Clause Say' by 1930's singer-trumpeter Louis Prima.
The Kids See Ghosts listening party was hosted in a 'secret' ghost town in Southern California on a site surrounded by abandoned buildings, including a saloon with food and drink to sate the journos and musos ferried in to the event. Guests gathered around a giant burning stake that dwarved the Wyoming campfire, to hear the album for the first time.
Some of the celebs in attendance included Ariana Grande, YG, Kim Kardashian (of course) and Takashi Murakami, the Japanese artist behind the Kids See Ghosts artwork. He previously designed the cover for Kanye West's Graduation and revealed last August he was hanging out with Cudi and Kanye in greater Tokyo.