The Sound of Gospel Music The Blackwood Brothers Quartet 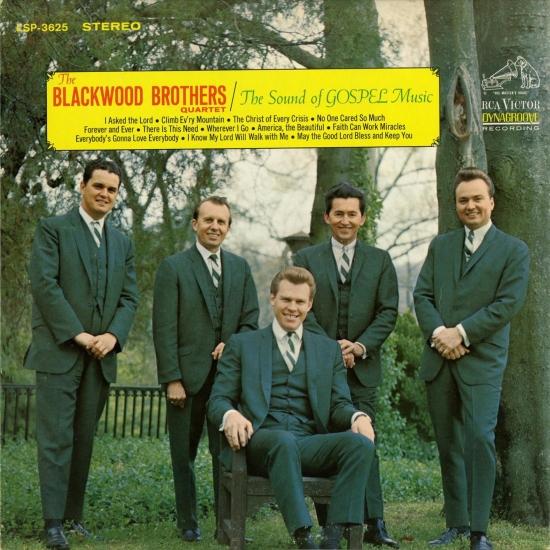 Info for The Sound of Gospel Music

The Blackwood Brothers Quartet was formed in 1934 with brothers Roy, Doyle, James and Roy's son, R.W. In the late 50s Roy and Doyle retired from traveling and in 1954 R.W. was killed in a tragic airplane crash. However the quartet with James, as the quartets' leader and spokesman, established a new group of singers who would go on to take Gospel music to new heights as they traveled and sang in all fifty of the United States, every Canadian province as well as cities in Great Britain, Europe, the Middle East, Northern Africa, South Africa, Japan, Taiwan, Thailand, South Korea, Hong Kong and the Philippines.
In 2002, James Blackwood went to be with the Lord, but his sons, Jimmy (James Jr.) and Billy have continued the 80-year tradition. Recently Jimmy retired after singing for 49 years and his younger brother, Billy now carries on the quartet which has the distinction of being the best-known name in Gospel Music history!
James Blackwood Jr.
has been singing gospel music for over 40 years, first with the Jr. Blackwood Brothers, then J.D. Sumner and the Stamps Quartet and later with The Blackwood Brothers. In 1984 Jimmy was healed of cancer and in 1986 began a solo evangelistic ministry. Jimmy is a 5-time Grammy award winner and the Blackwood Brothers and the Stamps Quartet have both been inducted into the Gospel Music Hall of Fame. Jimmy and his wife Mona have two daughters and five grandchildren.
Wayne Little
is one of the great tenor voices of our day. He has been singing for most of his life starting in church at the age of eight. In 1991 he started the Crystal River Boys gospel quartet. Recently he sang with Hovie Lister in the Statesmen Quartet and with Ken Turner and the New Millennium Quartet. Wayne has performed at the Pentagon with Rev. Franklin Graham. Wayne and his wife Gina have two sons.
Randy Byrd
is a ministers son whose singing influences include Bill Lyles, of the Blackwood Brothers from the early 1950s and James Big Chief Wetherington of the Statesmen Quartet. Randy has sung with several regional groups from Missouri and recently was the leader of the group Majesty from Des Moines, Iowa. Randy and his wife Lisa have three daughters and one granddaughter.
Brad White
the youngest member of the group, is an accomplished pianist and saxophone player. He played the piano for the James Blackwood Quartet and has served as a minister of music and has traveled in music ministry for over 15 years. His showmanship and piano arrangements are exciting and inspirational. Brad also sings the baritone part of the quartet. Brad and his wife Karen have two daughters.
Digitally remastered