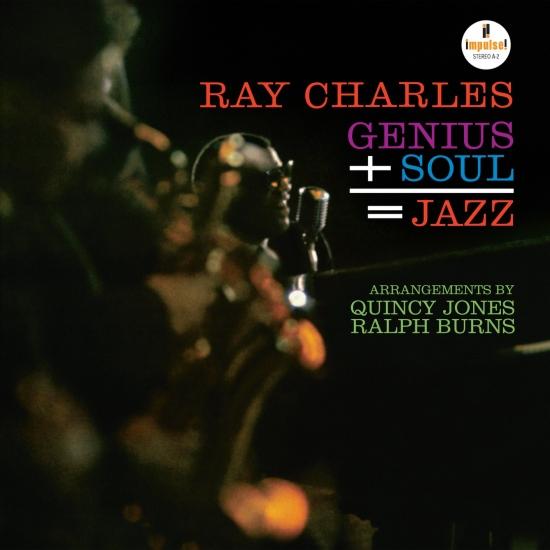 How is it that this landmark soul-jazz crossover has been unavailable for 15 years? Ray's 1960 big-band classic is back and joined by all three My Kind of Jazz LPs he put out from 1970-75 (plus a bonus version of Misty )! His hits One Mint Julep; I've Got News for You; I'm Gonna Move to the Outskirts of Town, and Booty Butt join his spins on Sidewinder; Bluesette; This Here; Sister Sadie; Moanin', and more.
Jazz pianist Dick Katz wrote in his original liner notes, "The combination here of rare talent plus uncommon craftsmanship has produced a record that showcases the timeless quality an innate taste that is uniquely that of Ray Charles.”
The record ascended to the No. 4 spot on Billboard's pop album chart and spawned the very first singles on Impulse. "I've Got News For You" rose to No. 8 R&B and No. 66 on the Hot 100. In addition, Charles' version of "One Mint Julep" charted No. 1 R&B and No. 8 pop and his rendition of the blues standard "I'm Gonna Move To The Outskirts Of Town" reached No. 25 R&B and No. 84 pop.
"One of the best early-'60s examples of soul-jazz crossover, this record, like several of his dates from the period, featured big-band arrangements (played by the Count Basie band). This fared better than some of Charles' similar outings, however, if only because it muted some of his straight pop aspirations in favor of some pretty mean and lean, cut-to-the-heart-of-the-matter B-3 Hammond organ licks. Most of the album is instrumental and swings vivaciously, although Charles does take a couple of vocals with "I'm Gonna Move to the Outskirts of Town" and "I've Got News for You." Yet one of those instrumentals, a cover of the Clovers' "One Mint Julep," would give Charles one of his most unpredictable (and best) early-'60s hits." (Richie Unterberger, AMG)
Ray Charles
Digitally remastered