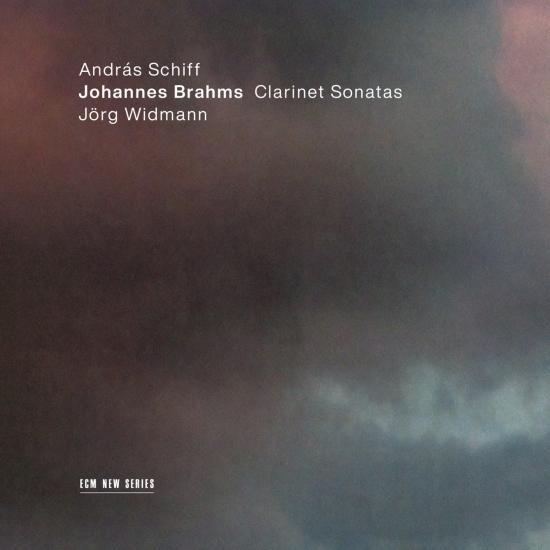 Two great artists, pianist András Schiff and composer/clarinettist Jörg Widmann, join forces for the first time on record, performing Brahms’s late masterpieces, the clarinet sonatas op. 120, written in 1894. In between the sonatas Schiff plays Widmann’s evocative Intermezzi for piano. As Jörg Widmann explains in a programme note, these are works inspired by his friendship with András Schiff and by a shared love of Brahms, to whom they pay tribute. The album was recorded at Neumarkt’s Historischer Reitstadel.
For years András Schiff and Jörg Widmann have come together again and again to play these sonatas from the twilight of Brahms’s career. Both artists are firmly rooted in the Austro-German classical-romantic repertoire; they have held deep discussions of their love for Brahms, deciphered the scores, and developed readings at once intimate, emotionally fulfilled and structurally compelling.
‘Fragments of remembrance and farewell’: thus the musicians describe these sonatas. Yet at times the aura of resignation is mingled with ‘an almost youthful delight that merges miraculously with the melancholy, with the leave-taking’.
Weightless entrances, as at the opening of the Second Sonata in E-flat major (one of those works, Schiff adds, ‘that don’t begin but are already there’), bear witness to the interpretive power of these two musicians, who succeed in illuminating, with subtle hues and gossamer phrasing, moments ranging from intimacy to impulsive outbursts.
Brahms’s art of ‘composing with almost nothing at all’, of probing a limited amount of material to the nethermost detail, has always, Widmann confides, held him spellbound. The movements are tightly interwoven with thematic relations and contrapuntally compressed, and yet they unfold in the most natural way, seemingly without effort. The analytic gaze of Widmann the composer thus guides us to another special feature of the present recording.
In 2010 the two artists gave a recital at the Salzburg Festival retracing the tensions among Brahms’s late works with clarinet. For this occasion Widmann, born in 1973, wrote five piano Intermezzi for his pianist friend. They now appear here for the first time on disc. One might say that Schiff interprets his friend’s musical portrait of the aged Brahms. As Widmann once put it in an introductory talk before a recital of the pieces on our recording, he drew inspiration from Schiff’s ‘sound’ at the piano, from his ‘musicality’ and his ‘blend of musicianliness and studied reflection’. Schiff, for his part, loves Widmann’s sensitive writing for the piano and the supremely lyrical qualities of the Intermezzi.
‘Delicately cantabile’ (zart singend) reads the expression mark that Widmann borrowed from Brahms. ‘I tried to write a piano texture that truly sings’, he explains. ‘For years I actually lacked the courage to compose a piece that sings so freely’. The relation to the human voice is intimately linked with the special cantabile of Brahms’ late works. He even called his op. 117 intermezzos (the famous first one is alluded to in Widmann’s fourth piece) the ‘lullabies of my sorrow’. His late piano pieces from op. 116 to op. 119 unite wistful farewells and a profound melancholy full of ‘ecstasy and contentment’ (as Brahms said of op. 119) with extraordinary economy of material and a compositional artistry worthy of the Old Masters.
Perhaps no other composer of today can match Widmann’s ability to capture the special tone and instrumental idiom of his great predecessors in a creative spirit and, at the same time, to absorb their poetics. He transforms the stylistic inflection of late Brahms as if it were a rich and manifold language unto itself. Yet the way he assimilates this language allows him to make his own personal and wholly contemporary statements. His acceptance of the principle of musical intertextuality (‘No text written today is conceivable without the totality of all existing texts’) opens up the possibility of relating his own creations to objets trouvés from the past, of reflecting the new in the familiar and plunging into the technical and mental depths of earlier composers’ styles.
It goes without saying that Widmann’s Intermezzi initially relate to Brahms’s late piano pieces opp. 116 to 119. But other works from the master’s final period were no less stimulating. Brahms, the former symphonist and self-critical heir to the German musical tradition from Schütz to Beethoven, summarises his self-imposed restriction to epigrammatic miniatures in the term ‘intermezzo’, a transitory and fugitive interlude. Nor was he being ironic: in the early 1890s, not yet 60 years old, he actually considered his compositional output to be finished. The intermezzos are thus basically ‘postludes’ steeped in melancholy.
Brahms’s creativity was rekindled in 1891 by his friendship with Richard Mühlfeld, the clarinettist of the Meiningen Court Orchestra. It gave birth to the Clarinet Trio (op. 114) and the Clarinet Quintet (op. 115). Mühlfeld, born in 1856, had started out as a violinist and learnt to play the clarinet later through self-instruction. He played in the Bayreuth première of the Ring in 1876, thereby immediately attracting the attention of Richard Wagner. In 1879 he became the solo clarinettist of the Meiningen Court Orchestra, which, beginning in 1880, was soon shaped into an élite ensemble by its principal conductor, Hans von Bülow.
In 1997 ECM New Series released the recording of Johannes Brahms’s two sonatas op. 120, played by Kim Kashkashian and Robert Levin. Brahms considered his version for viola and piano to be equal in importance to the version for clarinet. Our new recording with Schiff and Widmann now features an extraordinary combination of artists in the history of the works’ performance.
Andras Schiff, piano
Jörg Widmann, clarinet 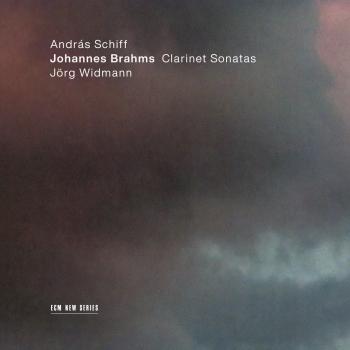 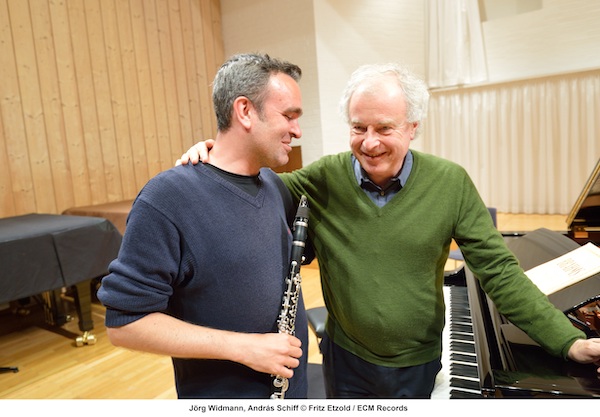