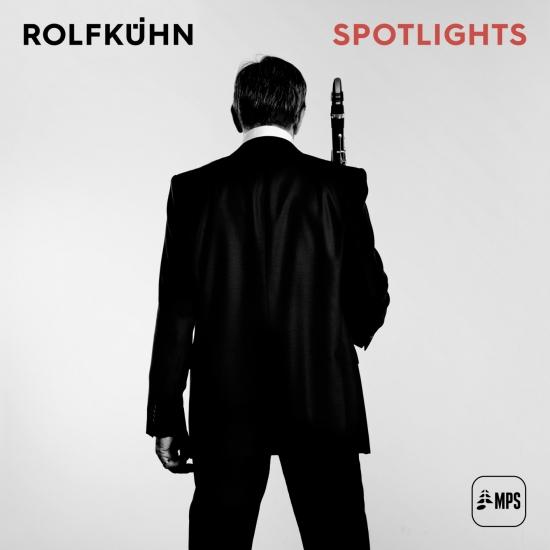 “My aim for my new record was to find really unusual combinations,” explains Rolf Kühn, in cheerful mood after his last day in the studio. SPOTLIGHTS is the title of his brand-new album to be released on the MPS label on September 30, 2016, in time for his 87th birthday – and it is yet another exciting milestone on his musical journey!
SPOTLIGHTS features nine of Kühn’s own compositions, plus two jazz standards from the 1940s (“Autumn Leaves” and David Raksin’s “Laura” from the film of the same name), and “Dexter’s Tune” by Randy Newman and “Choro do Portina” by Hamilton de Holanda.
The theme running through and joining up the album is of course the unmistakable sound of Rolf Kühn’s clarinet.
Hamilton de Holanda, the distinguished Brazilian expert on the bandolim, a kind of mandolin, immerses Kühn’s clarinet in Latin-sounding melancholy.
Albrecht Mayer, international classical star and solo oboist with the Berlin Philharmonic, provides a fascinating angle with his highly sensitive playing and the rich facets of his art.
Asja Valčić, the outstanding Croatian cellist, contributes her impressive, classical virtuosity and daring improvisation, as she races frantically through the notes with Kühn.
Christian Lillinger, the exceptional percussionist with the Rolf Kühn Unit, adds his wild groove to the mix and – like Berlin bassist Oliver Potratz – accentuates the tense dynamic mood.
Ed Motta, heavyweight Brazilian singer and megastar in his homeland, brings out his baritone to sound like a synthesizer suffering voltage fluctuations, breathing and scatting resounding word scraps into Kühn’s compositions.
And as if that were not enough, Rolf’s famous younger brother, pianist Joachim Kühn, weighs in with his inimitable style of playing, his rhythmic soul.
The special attraction of these 13 SPOTLIGHTS emanates from the extraordinary combination of instruments and styles, and above all from the fact that a group of virtuoso artists from very different musical backgrounds have come together to participate in a a project very close to their hearts.
“I have known my little big brother Joachim for over 70 years, have been friends with Albrecht for so long; I only got to know Asja, Ed and Hamilton personally last year – and despite the fact that we are all so different, I believe there is nothing more wonderful than making music with old and new soul mates,” enthuses the jazz clarinetist.
Rolf Kühn, clarinet, piano
Albrecht Mayer, oboe
Asja Valčić, cello
Ed Motta, voice, piano
Hamilton de Holanda, bandolim
Joachim Kühn, piano
Oliver Potratz, bass
Christian Lillinger, drums
Volker Greve, percussion