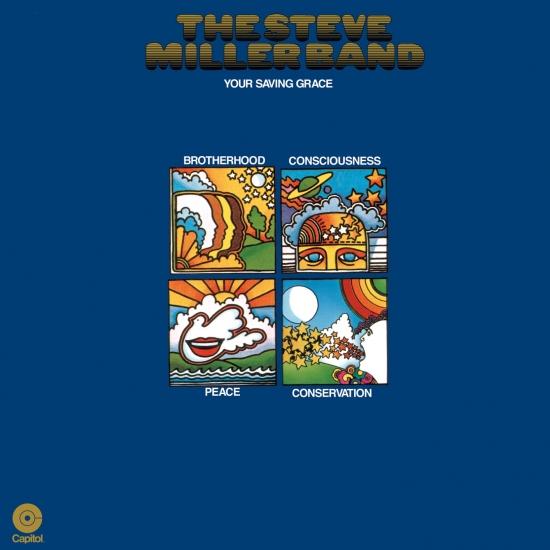 "Your Saving Grace" was released in 1969 only months after the groundbreaking "Brave New World". It's something of a retrenchment for the Steve Miller Band, ditching the experimental leanings of their first three albums once and for all. What's left sounds like the prototype for the mid-'70s albums that would finally make Miller a world-famous and wealthy man. Miller's characteristic blend of slide guitar, barrelhouse piano, and futuristic synthesizers is already in place, and songs like "Baby's House" and the loose, funky pop of "Little Girl" sound like dry runs for later hits like "Rock'n Me" and "Fly Like An Eagle." Your Saving Grace album for sale In these surroundings, only "Motherless Children," a reworking of a blues standard, and the forceful "Don't Let Nobody Turn You Around" recall the bluesier, heavier sound of Miller's early albums. "Your Saving Grace", complete with a quintessential '60s cover proclaiming the virtues of peace and brotherhood, is a transitional album, but its virtues make it worth a listen.
"Your Saving Grace is a much more earthy collection of tunes when compared to the band's previous three long-players. While there are distinct psychedelic remnants of the Boz Scaggs (guitar/vocals) and Jim Peterman (keyboards) era, the addition of keyboardists Ben Sidran and Nicky Hopkins -- which began on the Steve Miller Band's previous effort, Brave New World -- adds a jazzier facet to this second incarnation of the group. Harking back to the band's blues roots, Your Saving Grace includes a couple of distinct blues originals -- such as the up-tempo and gospel-doused "Don't Let Nobody Turn You Around" and a somewhat uninspired arrangement of "Motherless Children," which sounds more synchronous with the Sailor or Brave New World albums. The funky "Little Girl," the elegantly pensive "Baby's House," and the title track -- which is oddly programmed as the LP's final cut -- are among the highlights of this disc. Once again, the production is handled by Glyn Johns, whose contributions here are more subdued, yet no less noticeable. This is especially true of Miller's crystalline slide guitar licks on Lonnie Turner's cryptically titled "The Last Wombat in Mecca." The same upfront clean sound holds true on the laid-back and bluesy "Feel So Glad" -- which is punctuated by some inspired and unmistakable ivory tickling by studio wunderkind Nicky Hopkins. Although the album is not as thoroughly solid as earlier efforts, Your Saving Grace and the follow-up, Number 5, are definite bridges between the early trippy montages prevalent on Children of the Future and the direction that Miller would take on his much more successful mid-'70s discs." (Lindsay Planer, AMG)
Steve Miller, guitar, lead vocals (1–5, 7), harmonica
Lonnie Turner, bass, backing vocals, guitar
Ben Sidran, organ, electric piano
Nicky Hopkins, grand piano (4, 7)
Tim Davis, drums, backing and lead (6, 8) vocals
Additional musicians:
Glyn Johns, backing vocals (8)
Recorded 1969 at Wally Heider Studios, San Francisco, California
Produced by Glyn Johns
Digitally remastered