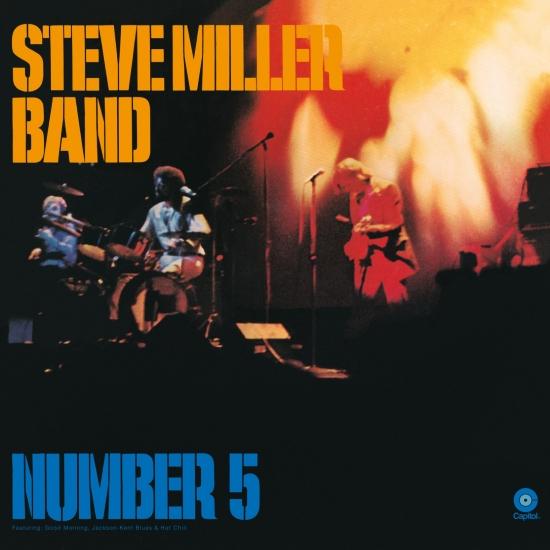 Steve Miller's first release of the 70's, "Number 5", saw the guitarist still bridging the adventurous psychedelic blues of his early work with the radio-pumping classic rock that he would perfect by the middle of the decade. Producer Glyn Johns (Rolling Stones, The Who) adds some interesting sonic experimentation to the album, which adds a new dimension to Miller's music and approach, especially on songs like "Industrial Military Complex Hex."
The album opens on a mellow, somewhat countrified note that reflects the record's Nashville recording base and the presence of session hands like harmonica player Charlie McCoy and fiddler Buddy Spicher. These acoustically-based songs ("Good Morning," "I Love You," "Going to the Country"), segue into some of Miller's most underrated rockers --"Going to Mexico" and "Jackson-Kent Blues," for example Number 5 songs. #5 would be one of the last strict blues-rock albums Miller would make before dedicating himself full-time to a successful career as an FM radio pop star.
"Released in the summer of 1970, Number 5 was the fifth LP by the Steve Miller Band in just over two years. While it compares favorably to its immediate predecessor, Your Saving Grace, it is not quite up to the consistent excellence of the potent Brave New World from the previous summer. However, it does have a fair share of delights, especially the opening triumvirate of "Good Morning," "I Love You," and "Going to the Country." These selections, and all of side one, have a distinctly more rural feel than did previous recordings, due perhaps to the fact that the tracks were recorded in Nashville. Charlie McCoy contributes harmonica to several of these cuts, and Buddy Spicher plays fiddle on "Going to the Country," while Bobby Thompson adds banjo to "Tokin's." Side two is more uneven, with the lead-off mid-tempo rocker "Going to Mexico" serving as a conclusion to the first side's thematic coherence, and the closing "Never Kill Another Man" a string-laden ballad. Sandwiched between them are three experimental-sounding pieces, seasoned with sound effects, buried vocals, and semi-political themes. Although it couldn't have been predicted at the time, Number 5 represented the end of an era for Steve Miller and bandmates, and subsequent albums would sound nothing like this first batch of great recordings." (Jim Newsom, AMG)
Steve Miller, guitar, vocals
Lonnie Turner, bass
Bobby Winkelman, bass, vocals
Ben Sidran, keyboards
Nicky Hopkins, keyboards
Tim Davis, drums, vocals
Additional musicians:
Charlie McCoy, harmonica
Lee Michaels, organ (track 6)
Buddy Spicher, fiddle (track 3)
Wayne Moss, guitar (track 5)
Bobby Thompson, banjo (track 5)
Produced by Steve Miller
Digitally remastered