The Resurrection Of Pigboy Crabshaw The Paul Butterfield Blues Band 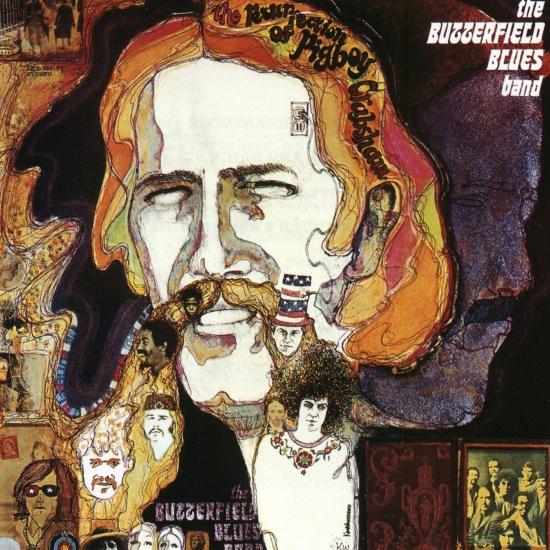 The band's third album finds guitar hero Mike Bloomfield MIA and replaced by a horn section including the very young David Sanborn. (Ironically, Bloomfield departed to start his own horn band, the ill-fated Electric Flag). Stylistically, the band was inching away from blues purism, and moving toward jazz and r&b, particularly of the Stax-Volt variety, as witness the idiomatic cover of Albert King's 'Born Under a Bad Sign.' (The band must have been listening to Motown as well, hence the thoroughly rocked-out re-arrangement of Marvin Gaye's 'One More Heartache,') The album title, incidentally, refers to an alias of remaining guitarist Elvin Bishop, who gets plenty of room to work out here, particularly on 'Driftin and Driftin''.
„This imported double album from WEA's international division is a real conundrum for blues fans in general and fans of the Paul Butterfield Blues Band in particular. On the one hand, the first of its two discs is The Resurrection of Pigboy Crabshaw, the last of what are usually regarded as the classic albums by the band, and a glorious moment in the career of guitarist Elvin Bishop (aka 'Pigboy Crabshaw'), and it's remastered in far better, closer, crisper sound than the extant domestic Elektra Records CD of the same album, which was transferred digitally more than a decade ago; and it's also got their next album, In My Own Dream, which generally doesn't appeal to the same listenership, with its more horn-oriented and jazz-influenced sound; and that album is otherwise available domestically through Wounded Bird Records (who do such a good job with it that it would be a shame to take any business away from them). Also working against this double-CD is its price -- it's more than twice as expensive at retail as the domestic 'Pigboy Crabshaw' album. On the other hand, the sound is really good -- but that's also true of the Wounded Bird release of In My Own Dream. So the fans should sort it out for themselves, but suffice to say that the sound on this double-disc set won't disappoint, and the annotation by Peter Doggett (with help from Elvin Bishop) is very thorough and enlightening about this tumultuous period in the group's history.“ (Bruce Eder, AMG)
Paul Butterfield, vocals, harmonica
Elvin Bishop, guitar
Mark Naftalin, keyboards
Bugsy Maugh, bass, vocal on 'Driving Wheel'
Phil Wilson, drums
Gene Dinwiddie, tenor saxophone
David Sanborn, alto saxophone
Keith Johnson, trumpet
Produced by John Court
Digitally remastered