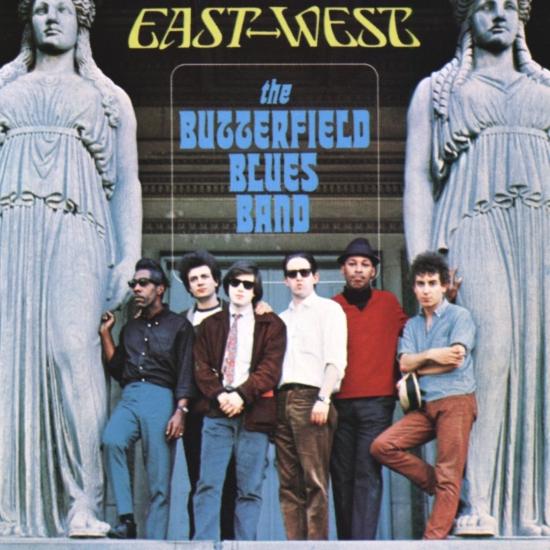 The Paul Butterfield Blues Band nailed it right out of the gate with their smoking self-titled 1965 debut, which spotlights the blues-guitar genius of Mike Bloomfield alongside Butterfield's impassioned vocals and wailing harmonica, abetted by a rock-solid supporting cast of Elvin Bishop on rhythm guitar, keyboardist Mark Naftalin and Howlin' Wolf's rhythm section, Jerome Arnold on bass and drummer Sam Lay. The Butterfield Blues Band's first shot was the perfect set-up for the more exotic stylings of 1966s East-West, which finds them adding elements of modern jazz and the music of India, most notably on the landmark title track, which paved the way for much of the musical experimentation of the late '60s.
„The raw immediacy and tight instrumental attack of the Paul Butterfield Blues Band's self-titled debut album were startling and impressive in 1965, but the following year, the group significantly upped the ante with its second LP, East-West. The debut showed that Butterfield and his bandmates could cut tough, authentic blues (not a given for an integrated band during the era in which fans were still debating if a white boy could play the blues) with the energy of rock & roll, but East-West was a far more ambitious set, with the band showing an effective command of jazz, Indian raga, and garagey proto-psychedelia as well as razor-sharp electric blues. Butterfield was the frontman, and his harp work was fierce and potent, but the core of the band was the dueling guitar work of Mike Bloomfield and Elvin Bishop, especially Bloomfield's ferocious, acrobatic solos, while Mark Naftalin's keyboards added welcome washes of melodic color, and the rhythm section of bassist Jerome Arnold and drummer Billy Davenport were capable of both the rock-solid support of veteran blues players and the more flexible and artful pulse of a jazz combo, rising and relaxing with the dynamics of a performance. The Butterfield Blues Band sounded muscular and exciting on classic blues workouts like 'Walkin' Blues,' 'Two Trains Running,' and 'I Got a Mind to Give Up Living,' but the highlights came when the band pushed into new territory, such as the taut New Orleans proto-funk of 'Get Out of My Life, Woman,' the buzzy and mildly trippy 'Mary, Mary,' and especially two lengthy instrumental workouts, the free-flowing jazz of Nat Adderley's 'Work Song' and the title track, a fiery mix of blues, psychedelia, Indian musical patterns, and several other stops in between, with Butterfield, Bloomfield, and Bishop blowing for all their worth. East-West would prove to be a pivotal album in the new blues-rock movement, and it was the Paul Butterfield Blues Band's greatest achievement; Bloomfield would be gone by the time they cut their next LP to form the Electric Flag, and as good as Bishop was, losing the thrust and parry between the two guitarists was a major blow. But East-West captures a great group in high flight as the bandmembers join together in something even more remarkable than their estimable skills as individuals would suggest, and its importance as a nexus point between rock, blues, jazz, and world music cannot be overestimated.“ (Mark Deming, AMG)
'[T]he album still sported tough WindyCity blues...but also delved into jazz improvisation around Nat Adderley's'Work Song,' a master-class in controlled dynamics under Butterfield's bandleading.' (Mojo)
'Sundazed’s East-West packs a sonic punch, revealing the scorching guitars and gritty-sounding harmonica in all their ragged glory. During Bloomfield’s solo on the title track, an open soundscape clearly brings out the texture of details like the drum heads being hit by a mallet and Butterfield’s harmonica riffs under the guitar lines. Not a bad place to start.' (Absolute Sound Magazine)
Paul Butterfield, vocals, harmonica
Elvin Bishop, vocals, guitar
Michael Bloomfield, guitar
Mark Naftalin, piano, organ, keyboards
Nick Gravenites, piano, organ
Billy Davenport, drums
Produced by Paul A. Rothchild, Mark Abramson, Barry Friedman
Digitally remastered