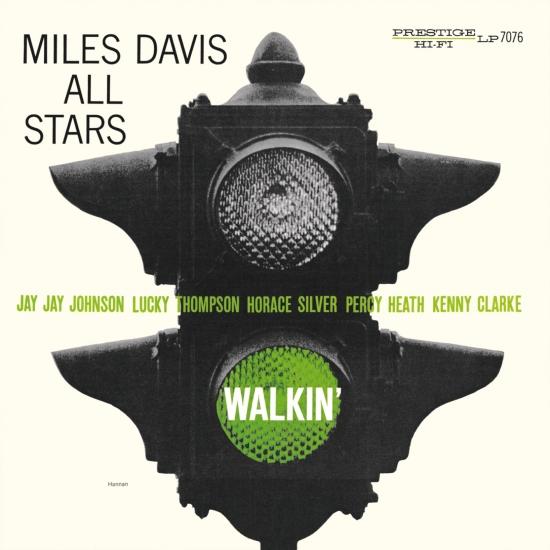 Miles Davis All Stars - Walkin' comprises tracks from two different sessions recorded in 1954. Davis was in a transitional period during this time, integrating the innovations from his BIRTH OF THE COOL period with the genre-defining, forward-thinking post-bop he would perfect a couple of years later with his first great quintet.
Yet Miles's transitional albums are usually more polished, developed, and engaging than a lot of other artists' definitive albums, and such is the case with WALKIN'. Whether on originals ('Solar') or standards ('Love Me or Leave Me'), the sessions boast impeccable playing and superb interplay between the musicians, who number among the best of the era. Pianist Horace Silver, drummer Kenny Clarke, and trombonist J.J. Johnson are among the personnel, and one can hear the beginnings of the synergy Miles was searching for and would find with his quintet (especially in the dynamics between his trumpet and Lucky Thompson's sax, which foreshadows his chemistry with John Coltrane).
„The undeniable strength and conviction present in Miles Davis' performance on Walkin', underscores the urgency and passion with which he would rightfully reclaim his status as a primary architect of bop. Davis is supported by his all-stars, consisting of his primary rhythm unit: Horace Silver (piano), Percy Heath (bass), and Kenny Clarke (drums). The sextet featured on the title track, as well as 'Blue 'n' Boogie,' adds the talents of J.J. Johnson (trombone) and Lucky Thompson (tenor sax). Davis' quintet includes the primary trio and Dave Schildkraut (alto sax). Perhaps not an instantly recognizable name, Schildkraut nonetheless made some notable contributions to Stan Kenton's Kenton Showcase EPs, concurrent with his work with Miles. Walkin' commences with the extended title track, which follows a standard 12-bar blues theme. While the solos from Johnson and Thomson are unique, Miles retains a palpable sense of extrication from the music -- as if the song was an extension of his solo instead of the other way around. The lethargic rhythms reiterate the subtle adornments of the horn section to the basic trio. In direct contrast to 'Walkin'' is a full-tilt jumper, 'Blue 'n' Boogie.' The improvisation yields some truly memorable solos and exchanges between Davis and Johnson -- who can be heard clearly quoting from Thelonious Monk's 'Rhythm-A-Ning.' 'Solar' maintains a healthy tempo while drawing the listener in to the delicate interplay where the solos often dictate the melody. Horace Silver's piano solo is Ellington-esque in it's subdued elegance. The final track, 'Love Me or Leave Me,' gives the most solid indication of the direction Miles' impending breakthrough would take. So swift and certain is each note of his solo, it reflects the accuracy of someone thinking several notes ahead of what he is playing. Walking is a thoroughly solid effort.“ (Lindsay Planer, AMG)
Miles Davis, trumpet
Lucky Thompson, tenor saxophone
J. J. Johnson, trombone
David Schildkraut, alto saxophone
Horace Silver, piano
Percy Heath, bass
Kenny Clarke, drums
Recorded April 3, 1954 (tracks #3-5), April 29, 1954 (tracks #1-2) at Van Gelder Studio, Hackensack
Produced by Bob Weinstock
Digitally remastered