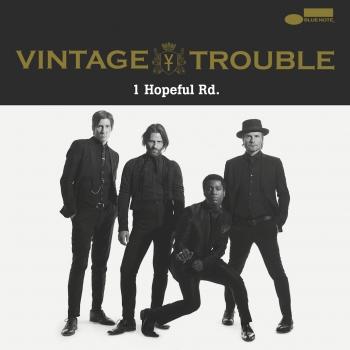 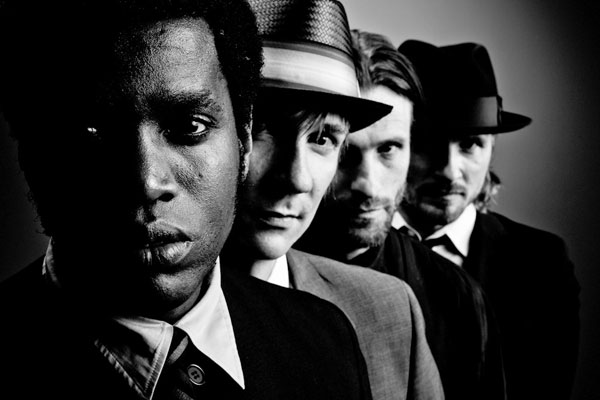 Vintage Trouble
Since the release of their debut album, The Bomb Shelter Sessions, Los Angeles-based band Vintage Trouble has gone from playing intimate hometown clubs to opening for The Rolling Stones in London’s Hyde Park, touring North America and Europe with The Who and playing sold-out headline shows worldwide. “Like an M-80 in church, Vintage Trouble lands with a hiss and then blows apart what’s come to define modern soul, blues and rock,” observed Paste Magazine while Yahoo! Music said, "imagine James Brown singing lead for Led Zeppelin and you'll get an idea of Vintage Trouble's muscular, in the pocket sound." The band has performed on such television shows as Late Show with David Letterman, The Tonight Show with Jay Leno (four times, including Leno’s second-to-last show), Conan, Jimmy Kimmel Live and Later…with Jools Holland. They have also been seen and heard in a national Honda commercial that featured the band performing the song “Today Is Pretty Great.”
So Vintage Trouble’s Ty Taylor (vocals), Nalle Colt (guitar), Richard Danielson (drums) and Rick Barrio Dill (bass) will be the first to tell you: yes, today is pretty great. What is especially remarkable is that all of this success came before the band had even signed to a major record label.
In the spring of 2014, Vintage Trouble inked with Blue Note Records. Label president Don Was recalls being knocked out by the band’s show at L.A.’s El Rey Theatre. “There were lines around the block and tickets were sold out based solely on word-of-mouth. They played a two hour show...half of the songs were brand new and totally unfamiliar to the audience...yet the place was rocking from the first notes straight through to the final encore,” says Was. “Do you know how hard it is for a new band to pull that off? It requires tremendous charisma, thundering power, incredible grooves and top notch songwriting.”
It also helps to have one helluva fanbase. Vintage Trouble’s fans – who branded themselves as “TroubleMakers” early on – have been instrumental at every stage of the band’s career. To thank the TroubleMakers for their unwavering support, Vintage Trouble unplugged and recorded a special five-song EP in 2014. The Swing House Acoustic Sessions – which is available only at Vintage Trouble shows and on the band’s website – features three brand-new songs plus completely re-imagined versions of two tunes from The Bomb Shelter Sessions. Vintage Trouble performsone of the new tracks,“Another Man’s Words,” live in the studio in this video.
Formed in 2010, Vintage Trouble cut its teeth playing weekly residencies at L.A. clubs like Harvelle’s – and attracted a massive following in the process. The resulting underground buzz led to legendary manager Doc McGhee taking notice and signing Vintage Trouble to his roster after hearing only a single chorus. Doc's first order of business was to break the band in England. Their first venture overseas resulted in a similar groundswell with Music Weekly naming them 2011 Breakout Artist of the Year and HMV hailing them as their "Next Big Thing.”
The band’s performance on Later… with Jools Holland was one of the most talked about of the year, blowing up Twitter as the 6th most tweeted topic worldwide just hours after it aired. The very next day, their self-released debut, The Bomb Shelter Sessions, entered the charts, becoming the No. 1 R&B Album and No. 2 Rock Album on Amazon UK—No. 6 on Amazon overall and No. 13 on iTunes. It was in the UK Top 40 by the time it was officially released in July 2011.
Between opening for Brian May's Anthems tour, supporting Bon Jovi in stadiums and arenas, and headlining smaller venues, after-hours clubs and pubs, Vintage Trouble performed for an estimated 400,000 people throughout the UK and Germany, as chronicled in the documentary 80 Shows in 100 Days, which is available here. Ty was invited to front Queen for Freddie Mercury's 65th birthday celebration in London, setting the stage for Vintage Trouble to embark on their third overseas tour.
The 2012 U.S. release of The Bomb Shelter Sessions, combined with their electrifying live show, catapulted Vintage Trouble into the limelight at home. The band performed on numerous national television shows and earned praise from NPR, Rolling Stone, The Wall Street Journal and Billboard. The New York Times noted, "Like Otis Redding, Vintage Trouble makes music that is a little bit of everything...you can slow dance, groove, rock and let it all go." Their first video, "Nancy Lee," filmed entirely with an iPhone, won at the Original iPhone Film Fest, not just taking the Music Video category, but the festival's grand prize as well.
Vintage Trouble has continued to tour non-stop, with frequent forays across the US, UK and Europe and trips to Australia and Japan. In addition to opening for such artists as The Who, The Rolling Stones, Bon Jovi and Lenny Kravitz, the band has played numerous festivals, including Bonnaroo, Coachella, SXSW and Rock In Rio. Vintage Trouble headlined the 2014 Montreal International Jazz Festival, playing to an estimated crowd of 100,000. During its return to Glastonbury, lightning forced the closure of the stage when the band was only two songs into its set. Undeterred, Vintage Trouble turned in a riveting acoustic set in front of the stage for the multitude of standing in the rain – a set that became one of the 2014 festival’s most talked about events.
It’s that kind of passion, together with hard work, talent and luck, that are taking Vintage Trouble right where they deserve to be: on our radios and our televisions, in our headphones and our cars, at our favorite venues and on the soundtrack of our most memorable moments in life.