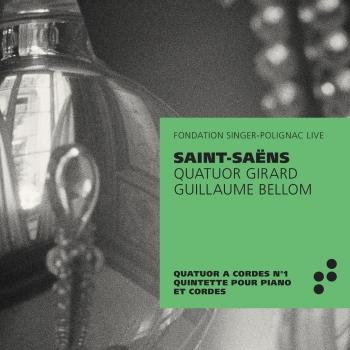 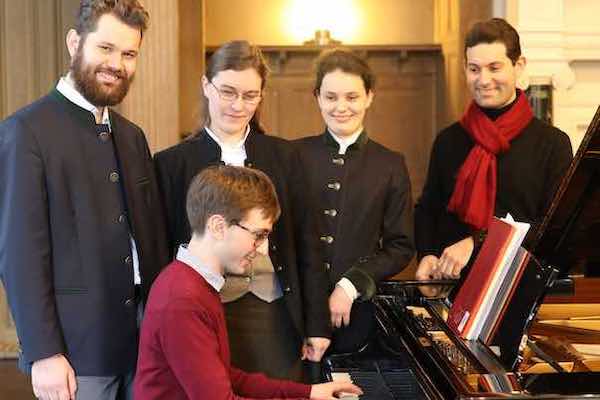 Guillaume Bellom
has one of the most atypical path of his generation, pursuing studies in both violin and piano, from the conservatoire of his hometown Besançon all the way to the Conservatoire of Paris. It is in this institution that he decided to fully develop his activity as a pianist, under the influence of striking personalities such as Nicholas Angelich and Hortense Cartier-Bresson.
Finalist and winner of the “Modern Times” prize, rewarding the best performance of the new music piece at the Clara Haskil 2015 competition, he revealed himself during this event dedicated to the great Romanian pianist, herself a good violinist as well. That same year, he won the first prize at the Épinal international competition and became laureate of the “L’Or du Rhin” foundation, before winning the Thierry Scherz prize at the “Sommets Musicaux de Gstaad” the next year. In 2017, he was nominated at the Victoires de la Musique in the “instrumental soloist revelations” category. He is also an associate artist at the Singer-Polignac Foundation in Paris since 2018
He performed as a soloist with the Orchestre National d'Ile de France, the Chamber Orchestra of Lausanne, the Orchestre National de Montpellier, and the National Orchestra of Lorraine, under the baton of Jacques Mercier, Christian Zacharias, Marzena Diakun. Also deeply interested by chamber music, his mastery of a vast repertoire has made a much sought-after musical partner out of him. He plays regularly in numerous festivals, including the Festival international de piano de la Roque d'Anthéron, the Festival de Pâques in Aix-en-Provence, the Piano aux Jacobins, the Festival de Pâques and L’Août Musical in Deauville, the Festival des Arcs, the Shanghai Concert Hall, the Bombay Royal Opera, the Mariinsky Theatre in St Petersburg, with artists such as Renaud Capuçon, Amaury Coeytaux, Nicolas Dautricourt, Paul Meyer, Yan Levionnois, Victor Julien-Laferrière.
His discography includes notably two albums dedicated to four-hands pieces by Schubert (rewarded by the prestigious “ffff” of French magazine Télérama) and Mozart, recorded with Ismaël Margain for Aparté, a cd with cellist Yan Levionnois (“ffff” of Télérama), released in 2017 for Fondamenta, and a solo cd around Schubert, Haydn, and Debussy, released in 2017 as well by Claves.
Quatuor Girard
Composed of members of one large family, the Girard Quartet was born of a shared passion brought to life by family performances of chamber music from a very early age.
Trained by the Ysaÿe Quartet at Paris’s Conservatoire Régional and then by Miguel da Silva at Genève’s Haute Ecole de Music, the Girard Quartet were learning at the same time from some of the greatest quartets at the European Chamber Music Academy, the Académie musicale in Villecroze, Proquartet, and Aix-en-Provence’s Académie du festival, quickly making a name for themselves at several important international music competitions. Winners of the Prix Académie Maurice Ravel in 2010 at the Saint-Jean-de-Luz festival, the Quartet were also prize winners at the Concours de Genève in 2011, and followed this by winning awards from the Fondation Banque Populaire and the HSBC Académie du Festival in Aix-en-Provence.
At the present time, they are quartet in residence at the Queen Elisabeth of Belgium’s Royal Chapel, where they benefit from close contact with the Artemis Quartet. They are also supported by the Singer-Polignac Foundation.
Guests in many prestigious concert halls and festivals in France including the Auditorium of the Musée d'Orsay and the Théâtre du Châtelet both in Paris, Nantes’s La Folle Journée, Arles’s Soirées et Matinées musicales, the Deauville festival, and La Grange de Meslay, the Quartet are also sought after on the international scene, notably in London’s Wigmore Hall as well as in Switzerland, Italy, Belgium, Morocco, Russia and Japan.
The Girard Quartet play with internationally renowned musicians such as Philippe Bernold, Maurice Bourgue, Miguel da Silva, Nicolas Dautricourt, Henri Demarquette, Yovan Markovitch, Jean-Claude Pennetier, Raphaël Pidoux, François Salque, and Dame Felicity Lott.
Regularly invited by France Musique (Mardi Idéal, Plaisirs d'Amour, Génération Jeunes Interprètes, Plaisirs du Quatuor...) and by Radio Classique, they also collaborate with Jean-François Zygel. Their first album on the Discophiles Français label was lauded by music critics (Choix de France Musique, Qobuzissime). This year, the Girard Quartet continue their performances of the complete set of the Beethoven string quartets which are scheduled over a three-year period at the Auditorium of Caen.
The Quartet combine their concert activities with an ongoing drive to make their music available to audiences of all tastes. With this in mind, they have already established joint ventures with several primary schools and music schools and have thus been able to reach hundreds of children throughout France. They have held music residences at the Théâtre de Coulommiers as well as the Vieux-Palais d'Espalion.
The Girard Quartet all play instruments made between 2014 and 2016 by the Parisian stringed instrument maker, Charles Coquet.