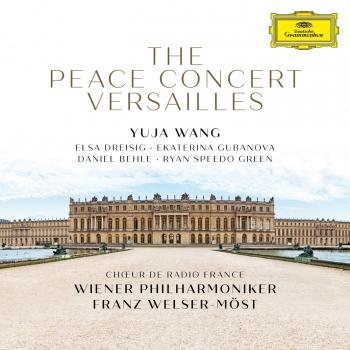 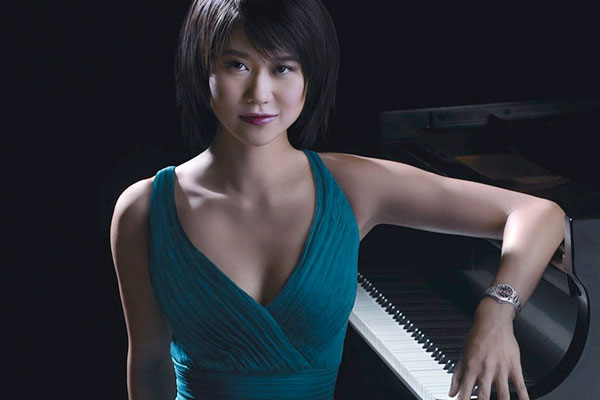 Yuja Wang
Twenty-five year old Chinese pianist Yuja Wang is widely recognized for playing that combines the spontaneity and fearless imagination of youth with the discipline and precision of a mature artist. Regularly lauded for her controlled, prodigious technique, Yuja has been praised for her authority over the most complex technical demands of the repertoire, the depth of her musical insight, as well as her fresh interpretations and graceful, charismatic stage presence.
Yuja is an exclusive recording artist for Deutsche Grammophon. Her debut recording, Sonatas & Etudes, released in the spring of 2009, “suggests a combination of blazing technique and a rare instinct for poetry” wrote Gramophone magazine, which named Yuja the Classic FM Gramophone Awards 2009 Young Artist of the Year. For her second recording, Transformation, Yuja received an Echo Award 2011 as “Young Artist of the Year”. Yuja next collaborated with Maestro Claudio Abbado and the Mahler Chamber Orchestra to record her first concerto album featuring Rachmaninoff’s Rhapsody on a Theme of Paganini and his Piano Concerto No. 2 in C minor which was nominated for a Grammy® as “Best Classical Instrumental Solo.” Her most recent record, Fantasia, is a collection of encore pieces by Albéniz, Bach, Chopin, Rachmaninov, Saint-Saëns, Scriabin and others.
In the few short years since her 2005 debut with the National Arts Center Orchestra led by Pinchas Zukerman, Yuja has already performed with many of the world’s prestigious orchestras including the Boston Symphony, Chicago Symphony, Cleveland Orchestra, Dallas Symphony, Detroit Symphony, Houston Symphony, Los Angeles Philharmonic, National Symphony, New York Philharmonic, Philadelphia Orchestra, Pittsburgh Orchestra and the San Francisco Symphony, in the U.S., and abroad with the Berlin Staatskapelle, China Philharmonic, Filarmonica della Scala, Israel Philharmonic, London Philharmonic, Orchestre de Paris, Orquesta Nacional España, the NHK Symphony in Tokyo, Royal Concertgebouw Orchestra, Orchestra Mozart and Santa Cecilia, among others.
In 2006 Yuja made her New York Philharmonic debut at the Bravo! Vail Music Festival and performed with the orchestra the following season under Lorin Maazel during the Philharmonic’s Japan/Korea visit. In 2008 Yuja toured the United States with the Academy of St. Martin in the Fields led by Sir Neville Marriner and in 2009 she performed as a soloist with the You Tube Symphony Orchestra led by Michael Tilson Thomas at Carnegie Hall. She performed with the Lucerne Festival Orchestra conducted by Claudio Abbado in Beijing, the Royal Philharmonic Orchestra in Spain and in London, and the Hong Kong Philharmonic.
Yuja has given recitals in major cities throughout Asia, Europe and North America, is a dedicated performer of chamber music, making regular appearances at summer festivals throughout the world. In March 2011 Yuja performed in a three-concert chamber series at the Salle Pleyel in Paris with principal players from the Berlin Philharmonic. She made her Carnegie Hall recital debut (Stern Hall) in October 2011.
Already Yuja has also worked with many of the world’s esteemed conductors including Claudio Abbado, Daniel Barenboim, Gustavo Dudamel, Charles Dutoit, Daniele Gatti, Valery Gergiev, Mikko Franck, Manfred Honeck, Pietari Inkinen, Lorin Maazel, Kurt Masur, Sir Roger Norrington, Antonio Pappano, Yuri Temirkanov, Michael Tilson-Thomas and Pinchas Zukerman.
In the 2012-13 season Yuja returns to the Israel Philharmonic to work with Zubin Mehta, followed by a tour of the U.S. that includes performances at Carnegie and Disney halls. She then launches into a three-week tour of Asia with the San Francisco Symphony and Tilson Thomas, traveling to Macau, China, Hong Kong, Taiwan and Japan. Yuja will again join the principal players from the Berlin Philharmonic with a series of all-Brahms concerts in Paris and Berlin, and will be presented by the Berlin Philharmonic in recital at the Philharmonie. In spring 2014 she returns to Carnegie Hall again in both recital and a concerto appearance with the San Francisco Symphony, and then a recital tour of Japan where she makes Suntory Hall recital debut.
Born in Beijing in 1987, Yuja began studying piano at age six, with her earliest public performances taking place in China, Australia and Germany, and went on to study at the Central Conservatory of Music in Beijing under Ling Yuan and Zhou Guangren. From 1999 to 2001 she participated in the Morningside Music summer program at Calgary’s Mount Royal College, an artistic and cultural exchange program between Canada and China, and began studying with Hung Kuan Chen and Tema Blackstone at the Mount Royal College Conservatory. In 2002, when Yuja was 15, she won Aspen Music Festival’s concerto competition. She then moved to the U.S. to study with Gary Graffman at The Curtis Institute of Music in Philadelphia, where she graduated in 2008. In 2006 Yuja received the Gilmore Young Artist Award. In 2010 she was awarded the prestigious Avery Fisher Career Grant. Yuja is a Steinway Artist.