People of the Sun Anthony Joseph 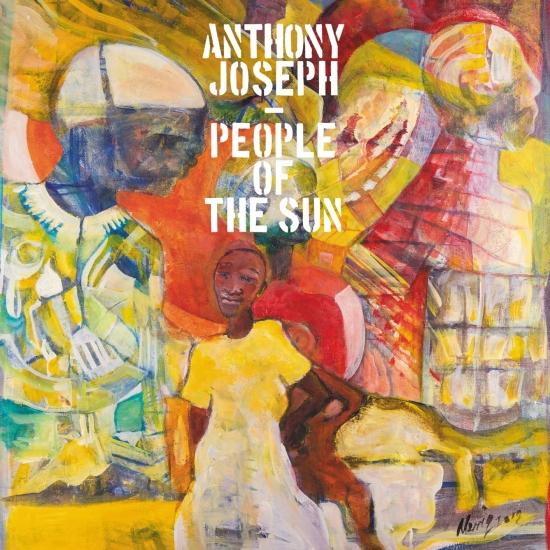 Info zu People of the Sun

“People of the Sun”. This is the title of Anthony Joseph’s new album. This latest opus highlights the famous carnival of Port-of-Spain, its ramifications as much musical, poetic as political. Produced by Anthony Yarde, Anthony Joseph’s henchman, in Trinidad, this album brings Caribbean music to shine for us.
Trinidad. 4,768 km2 of land surrounded by turquoise waters, a unique piece of the Caribbean puzzle where musical vibrations arrive on the waves from the neighbouring islands.
For ten years or so Anthony Joseph has traveled the world, recording and performing music in a somewhat makeshift manor. Visits to Trinidad until recently had been limited to only a few weeks or a month, but yet from wherever Anthony may have found himself, he never felt for a moment that his island was far from him. This bind is so strong that even the distance of thousands of kilometers couldn’t weaken its grasp. A force evident in the rhythms, poems and books and now honored even further in the recordings for his new album. ‘People Of The Sun’
And so, by uniting local musicians, the aptly named Caribbean Roots, they began recording in the very heart of Trinidad’s capital, Port of Spain. The idea was to soak up the intense effervescence of its local music — from both past and present — and to finally bring into existence, an album that had long lurked inside Anthony’s mind.
With his inimitable talent for blending elements of Caribbean soul, funk and jazz while showcasing his uncanny storytelling ability, this wise wordsmith has presented himself as someone who can link two generations of Trinidad together. Thanks to him, the older generation, steeped in local musical tradition and the new young generation, who are more open to current trends, have now joined forces. So here you have practitioners of the steelpan, soca, and rapso right alongside lovers of more contemporary R&B, soul and rock flavours. Creating something far from being an old-fashioned rendition of the past, nor a digital reckoning of the present, what we have is a tasteful fusion that wholeheartedly points toward the coming times.
Musicians Len “Boogsie” Sharpe, Brother Resistance, Modupe Folasade Onilu, Mikhail Salcedo, John John Francis, 3 Canal and his daughter Meena have all tagged on along the way to lend their musical mastery. Be it steel drums, militant poetics, percussive witchcraft or vocal prowess alongside the Ibis String Ensemble, who have injected string arrangements to give the album a melancholic dimension reminiscent of early Blaxploitation soundtracks.
All the above musicians found themselves locked away in a house that had been turned into a studio on the north of the island earlier this year. With only the ocean as their neighbor they began to work, riding waves of creativity and putting down the right recordings. Aided by melodies and arrangements from Anthony Joseph’s right-hand men; bassist Andrew John and saxophonist/producer/arranger
Jason Yarde, along with drummer David Bitan the project’s compositional core have handed themselves over as, “People Of The Sun’.
The steelpan’s metallic overtones are the album’s guiding musical thread throughout, constantly present, helping to highlight Anthony’s political lyrics, social commentary and conscience black identity. The grooves are so strong they bring both the players and listeners together in a collective trance…
‘People of the Sun’ will put Trinidadian music to new listeners far beyond its sandy shores. Currently, it may enjoy slightly less visibility than its Jamaican and Cuban counterparts. However, its musical motto remains, “Together we aspire”, and never before have these words resonated more intensely.
Anthony Joseph will play a headline show at London’s Barbican Centre as part of WIndrush: A Celebration. Forming part of London Jazz Festival. A show that will include amongst others, Manu Chao’s recent favourite songstress Calypso Rose. 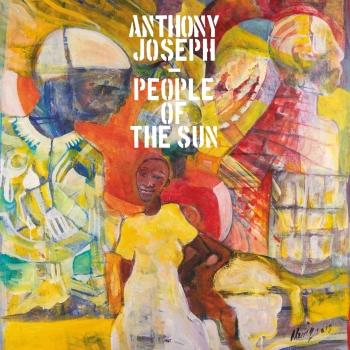 People of the Sun 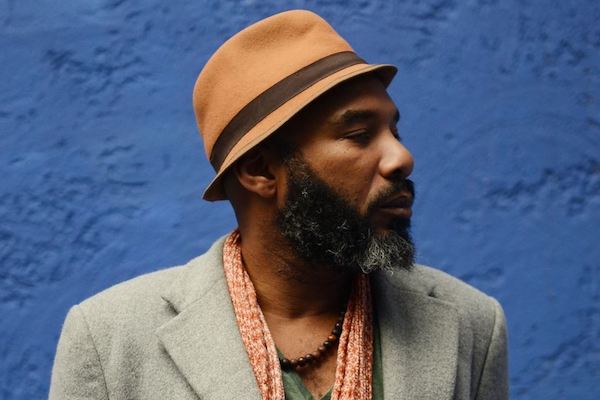 Anthony Joseph
is a poet, novelist, musician and lecturer described as ‘the leader of the black avant-garde in Britain’. His written work and performance occupies a space between surrealism, Jazz and the rhythms of Caribbean speech and music. He is the author of four poetry collections and a novel The African Origins of UFOs. In 2005 he was selected by the Arts Council of England and Renaissance One as one of 50 Black and Asian writers who have made major contributions to contemporary British literature. He has received an Arts Council of England touring award, and an AHRC postgraduate scholarship to complete his doctoral thesis; a ‘fictional biography’ of the legendary Trinidadian calypsonian Lord Kitchener. In January 2015 he presented Kitch a BBC4 documentary based on his research.
As a musician he has released six critically acclaimed albums and has collaborated with Archie Shepp, Mop Mop, Keziah Jones, Joseph Bowie and Meshell Ndgeocello who produced his album, Time. His debut album Leggo de Lion (2007) featured lyrics taken from his novel The African Origins of UFOs. Bird Head Son followed in 2009, coinciding with the publication of his 3rd poetry collection. Rubber Orchestras was released in 2011, alongside a new collection of poems of the same title. A live album Live in Bremen appeared in 2013, and Time, produced by Ndegeocello, in 2014.
His new album ‘Caribbean Roots’ (Strut/Heavenly Sweetness) represents an uncompromising return to his Trinidadian roots for Joseph, who has always remained true to a powerful, deep-seated sense of his own Caribbean identity. Starting out as a project with percussionist Roger Raspail, the album swiftly grew into a major work incorporating the rhythms, sounds and vibes that rock the Caribbean from San Fernando, Kingston and Les Abymes to Port-au-Prince and Havana.