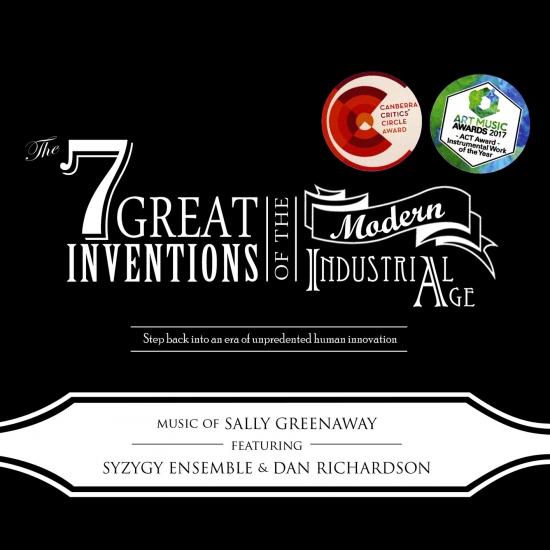 Info zu The 7 Great Inventions of the Modern Industrial Age

This masterful album explores the astounding surge in human invention during the 20th century ... and its consequences. This is an award-winning dramatic musical work by Sally Greenaway featuring the Syzygy Ensemble.
The work explores 7 categories of inventions from the 20th century and how they have changed humanity and our world.
It documents a range of inventions and key historic moments that changed the course of humanity forever.
The recording presents the key musical movements from Greenaway's hour long dramatic music work, The Seven Great Inventions of the Modern Industrial Age. The full production is an immersive and interactive story that involves 6 musicians supported by an actress (or actor), archival audio, sound fx, lighting and set design featuring over 100 artefacts from the 20th century.
During the composition process, Greenaway emphasized the development of atmosphere and narrative, which was drawn from the stories and experiences of the 90+ year olds she met with. She also spoke with archivists and scientists to bring further authenticity to the work.
“7 Great Inventions of the Modern Industrial Age is a delightfully inventive collaboration between composer Sally Greenaway and Syzygy Ensemble. The result is a thought-provoking and entertaining musical and theatrical journey through the trailblazing century of humanity-changing invention. A highlight of this collaborative production is the superb musicianship of the Syzygy Ensemble a contemporary music sextet on piano, violin, cello, clarinet, flute and percussion. Their musicianship is unparalleled. Greenaway's suite of music notably constitutes an eclectic range of compositional genres.” (Peter Wilkins, Canberra Times)
“Greenaway has been steadily building a reputation for the versatility of her compositions, embracing classical chamber works, choral, big band jazz, film and documentary soundtracks. Greenaway took advantage of the opportunity to experiment with different genres and styles. through telecommunications, aviation, space exploration, massed warfare, the artificial brain and computing and biomechanical and medical marvels. Greenaway’s music was stylishly performed by the Melbourne based, Syzygy Ensemble, who played a variety of instruments. Greenaway’s music was eclectic and playful. A ragtime interpretation of Bach’s Two Part Invention to set the scene, evocations of a European carousel suggested the advent of film, and a haunting cello solo conjured up medical marvels.” (Bill Stephens OAM, Australian Arts Review)
Syzygy Ensemble 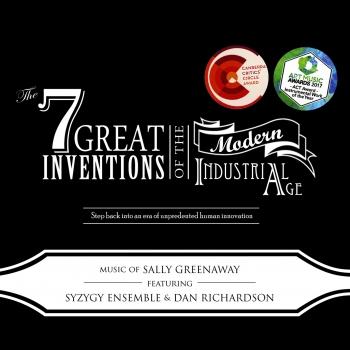 The 7 Great Inventions of the Modern Industrial Age 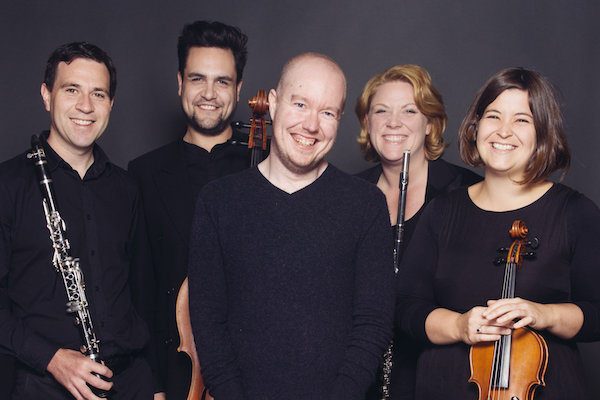 Syzygy Ensemble
has gained a reputation as one of Australia’s finest new music ensembles, lauded for their virtuoso precision, innovative programming, and ability to connect viscerally with their audiences.
The musicians of Syzygy Ensemble share a deep empathy with music of our own time as well as an unbridled desire to share this enthusiasm with audiences in a way that may stretch your ears but never slap you in the face!
They do not want to wait 100 years for the world to catch up with what composers are doing here and now, and they are excited to take you on the journey as they present contemporary music that speaks to all of us with relevance, authority and passion.
Since winning first prize in the chamber music section of the Australian Concerto and Vocal competition in 2010, Syzygy has gone on to tour, perform, mentor and educate all around the country, unearthing the best and most exciting music of the twentieth and twenty-first centuries. The ensemble has performed at the Gaudeamus Interpreter’s Award in Holland, for Brisbane’s DeClassified Music, the Mildura Arts Festival and is about to enter its 4th year as an ensemble-in- residence at the Melbourne Recital Centre.
Their debut CD Making Signs released 2016, contains specially commissioned works by Gordon Kerry and Brenton Broadstock, as well as premiere recordings of Brett Dean and Annie Hsieh.