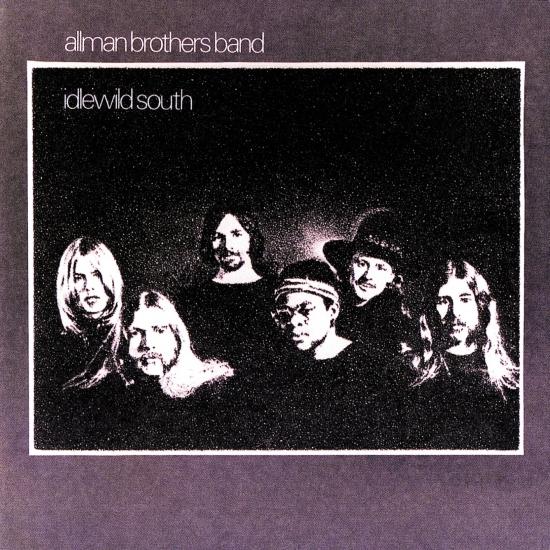 September 23rd marked 45 years since the release of the Allman Brothers Band's second studio album, Idlewild South, on Atco and Capricorn Records, which followed their 1969, self-titled debut. While that first album had little commercial success, the band's relentless touring behind it led to a buzz that led Eric Clapton to enlist Duane Allman to take part on his 1970 Derek and the Dominos album which produced "Layla." Produced by Tom Dowd, marking his first album with the band, Idlewild South was recorded in a variety of cities, including New York, Miami and Macon, GA, the band's adopted home, because of their hectic performance schedule. Most of the songs, including two of their most iconic – Gregg Allman and Kim Payne's "Midnight Rider" and Dickey Betts' "In Memory of Elizabeth Reed" – were road-tested before they were ever recorded. The album's title comes from the group's name for the run-down, isolated hunting cabin the band used for rehearsals and partying. The farmhouse, which they rented for the princely sum of $165 a month, was located on a manmade lake outside Macon, and people came and went with such frequency, the band compared it to New York's airport of the same name (later changed to John F. Kennedy International). Much of the material on the album was first created in that cabin, where the band's "brotherhood came to pass," according to Allmans roadie (and "Midnight Rider" co-writer) Kim Payne. The album didn't sell well at first, but eventually peaked at #38 on Billboard, setting the stage for their 1971 breakthrough, At Fillmore East.
Idlewild South has since gone on to become one of the Allman Brothers Band's most iconic releases. Rolling Stone named it one of the "40 Most Groundbreaking Albums of All Time" in 2014: "The Allman Brothers transmogrified from mere blues-rockers to an assemblage creating an entirely new kind of Southern music." Allmusic's Bruce Eder called it "the best studio album in the group's history, electric blues with an acoustic texture, virtuoso lead, slide and organ playing, and a killer selection of songs."
„If you're going to listen to the Allman Brothers, make sure you have the first four records. The band made The Allman Brothers Band, Idlewild South, At Fillmore East, and three-fourths of Eat a Peach with its original lineup, before Duane Allman's fatal motorcycle accident in 1971. The Tom Dowd-produced Idlewild South, their second album, comes off with a little less ferocity than their debut -- which is perhaps the result of reaching for new sounds the second time around. "Revival," the album's opener, introduces Dickey Betts as a composer. The countrified flavor of his songs gives an indication of where the band will head in the post-Duane era. Betts' other contribution to Idlewild South is the instrumental "In Memory of Elizabeth Reed," a centerpiece of the Fillmore East recordings. Gregg's "Please Call Home" and "Midnight Rider" are built around piano and acoustic guitar, respectively, and have a different feel than the band's usual twin Les Paul-and-Hammond sound. That sound is showcased in the balance of Gregg's tunes, however: the funky blues of "Don't Keep Me Wonderin'" (with Thom Doucette on harmonica) and "Leave My Blues at Home." The album is also notable for the rollicking version of Willie Dixon's "Hoochie Coochie Man," with the only vocal bassist Berry Oakley (who died in a motorcycle accident one year after Duane) ever recorded with the group. Though overall it packs less punch than The Allman Brothers Band, Idlewild South is all the more impressive for its mixture of chunky grooves and sophisticated textures.“ (Rovi)
Gregg Allman, vocals, organ, piano
Duane Allman, slide guitar, lead guitar, acoustic guitar
Dickey Betts, lead guitar
Berry Oakley, bass, vocals on "Hoochie Coochie Man", and harmony vocals on "Midnight Rider"
Jai Johanny Johanson, drums, congas, timbales, percussion
Butch Trucks, drums, timpani
Additional musicians:
Thom Doucette, harmonica, percussion
Recorded February–July 1970 at Capricorn Sound Studios; Criteria Studios; Regent Sound Studios
Engineered by Howard Albert, Jim Hawkins, Ron Albert, Bob Liftin
Produced by Tom Dowd, Joel Dorn
Digitally remastered
Please Note: We offer this album in its native sampling rate of 44.1 kHz, 24-bit. The provided 192 kHz version was up-sampled and offers no audible value!