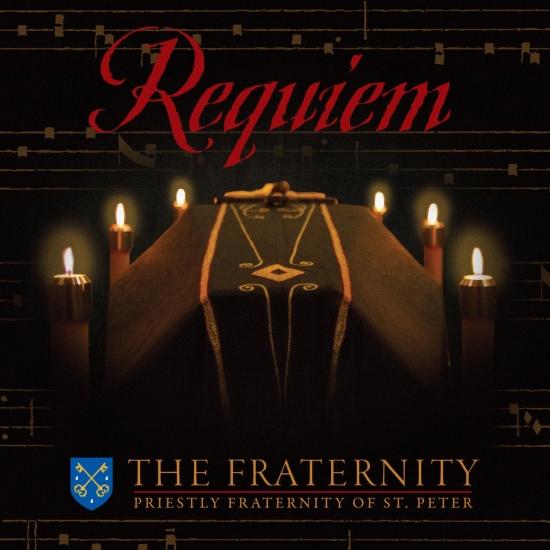 Be transported throughout ancient history to all regions of the world with this beautiful and unique presentation of Requiem from The Fraternity. With the exceptional art form of Gregorian chant, this recording has a mystical quality. With an ethos reflecting a time of sadness, representing that period of mourning inherent in the Requiem, this recording also simultaneously inspires a certain hope, a calmness and prayer, striking a glorious balance through the gift of poetic song. This unique recording contains twenty different tracks of sublime treasures, mostly Gregorian chant, and the album concludes with polyphonic motets striking just the right ending accent.
The Fraternity is an international community considered one of the top specialists in Gregorian Chant in the world. This will be their debut major label release.
Requiem, the debut major-label release by The Fraternity, was recorded by two of the top talents working in classical music today: multiple Grammy Award-winning producer Christopher Alder and engineer Brad Michel, also a Grammy winner. The executive producers of Requiem are Kevin and Monica Fitzgibbons of De Montfort Music, which has helped cultivate a new audience for ancient choral music by developing several chart-topping albums of chant. This latest recording transfigures the sound of mourning and remembrance into something mystical and beautiful, inspiring a feeling of hope in the cycle of life and an embrace of the eternal through the gift of meditative song. Requiem is a uniquely curated presentation, comprising 20 tracks of sublime melody, mostly monophonic Gregorian chant but concluding with the lush sound of polyphonic motets by the great 16th-century Italian composer Palestrina and a less well-remembered 18th-century composer, Giovanni Battista Martini, one of Mozart's teachers.
Many have heard The Fraternity sing Requiem chants at funeral services over the years, often suggesting that the group record this moving music. The decision to make their major-label debut with the music of Requiem was unanimous among the priestly singers, as they realized that nothing is so universal as the experience of death and the many emotions evoked by the living. After all, if a mother's lullaby to her child was perhaps the very first song ever heard, a lament for the death of a loved one wasn't far behind. The text of the Mass – beginning with "Requiem aeternam dona eis, Domine" (Grant them eternal rest, O Lord) – is spiritually uplifting, meant to convey souls to a particular vision of the beyond; the effect of the music is far-reaching and timeless, bound to touch the deepest emotions of any human heart.
Fr. Garrick Huang, co-music director of The Fraternity and a singer on Requiem, reflected on the roots of Gregorian chant, saying: "The style of chant that we sing go all the way back to ancient Rome, but it even has its sources, as certain people believe, in Jerusalem, with certain melodies Middle Eastern in origin. Rome has been cosmopolitan for centuries, of course, so it has always been a crossroads of many cultures. So there are even some sounds that we could say come from the East (Byzantine), or even different parts of the eastern empire." Fr. Huang points out that for monks down through the centuries, it was never enough to simply recite the sacred texts: "We sing them, because it has always been part of human nature to express love and joy, despair and sadness – the gamut of emotions – in song. That said, the Requiem chant is not a performance for us. We say that we 'sing' the Requiem, but it's more that we're praying the Requiem."
Christopher Alder, who has worked with some of the greatest classical singers of the past 30 years, echoes this idea that the words and melodies of the Requiem chant are deep inside the members of The Fraternity. "This community has obviously put a lot of emphasis on concentrated musical training in their education of young men to become priests," he says. "They know this material intimately, as it rolls out of them as if it were poetry that one has recited countless times. They know it by heart, in every sense of the term because the text is being simultaneously believed and sung at the highest level." Fr. Zachary Akers, music director of The Fraternity and a singer on Requiem, explains the relationship of the words to the melodies by noting, "I've heard it said that the music is meant to 'clothe' the texts." Although most people may only know the Requiem via the celebrated version by Mozart, the composer was himself inspired by the somber beauty and unadorned profundity of Gregorian chant, taking it as an emotional-aesthetic standard. Fr. Akers explains: "In this album we are hearing this type of music that was around long before Mozart, approaching the beginning of sacred music."
The Fraternity began in 1988, but from its roots in Rome, the community has spread far and wide, now including some 280 priests in missions worldwide. Still, it's a youthful community, with 35 the average age of its priests. Fr. Gerard Saguto, the North American Superior of The Fraternity who also sang on Requiem, explains that the daily responsibilities of the priests entail shepherding its flock's greatest joys and its deepest sorrows, from a marriage in the morning to a funeral in the afternoon. St. Augustine's sense of the sacred was a beauty "ever ancient, ever new." This beautiful work that's ancient yet made anew whenever he and his confreres sing it – serves as a message of hope. And for Fr. Saguto, this new recording of the Requiem – was "a way to share some of what we do on a wider scale, to put something beautiful and sacred out into the world."
The Fraternity
Produced by Christopher Alder 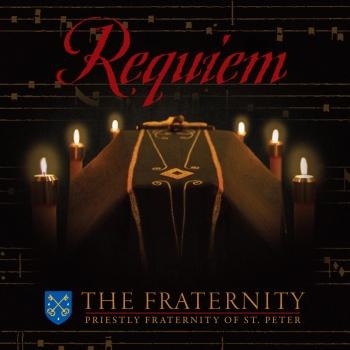