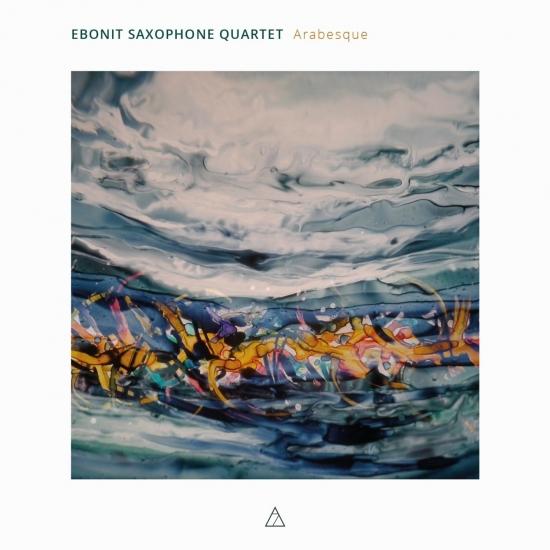 With their 2nd album Arabesque, the Dutch Ebonit Saxophone Quartet explores the music of Debussy, Saint-Saëns and Janacek. This ambitious and internationally successful saxophone quartet succeeds in achieving a true unity in tone together with a dynamic versatility that easily compares with a modern concert grand, on instruments that are still quite unappreciated in classical music! Their own arrangements of more known piano works of Debussy, like Deux Arabesques and Rêverie along with less heard pieces like Symphony in B minor and Janacek's Haunting In the Mists thus all sound unaffected and lively. Even Danse Macabre, the popular symphonic poem Saint-Saëns completed in 1874, is revived by the flexible and energetic sound of these four young top musicians.
Ebonit Saxophone Quartet:
Alberto Tárraga Alcañiz, soprano saxophone
Dineke Nauta, alto saxophone
Mateusz Pusiewicz, tenor saxophone
Paulina Marta Kulesza, baritone saxophone 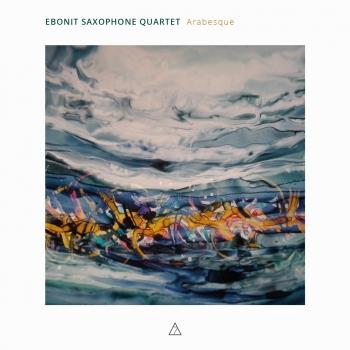 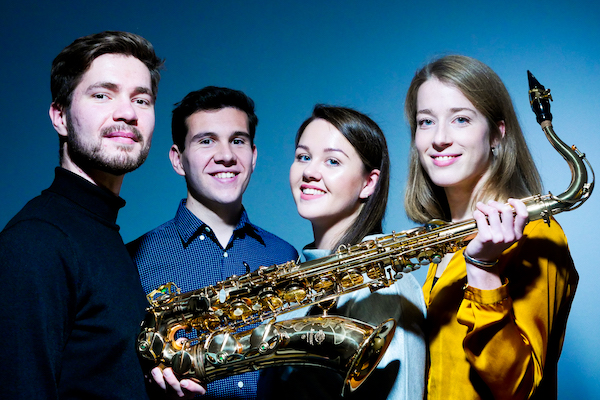 The Ebonit Saxophone Quartet
is a sparkling and inspired ensemble founded in 2011 at the Amsterdam Conservatory of Music. The four musicians from Poland, the Netherlands and Spain had quickly made for themselves a name in the Netherlands and abroad, performing in major halls including the Concertgebouw in Amsterdam, De Singel in Antwerp, Musikverein in Vienna, Konzerthaus in Berlin and Liszt Academy Solti Hall in Budapest. The quartet performed in international festivals including “New Music North West” in Manchester (England), the “Emilia Romagna Festival” in Bologna (Italy), the “Verbier Festival” (Switzerland), the “Heidelberger Frühling” and the “Schleswig-Holstein Musik Festival” (Germany) and the Holland Festival, Wonderfeel Festival and Oranjewoud Festival in the Netherlands.
The Ebonit Quartet has received first prize at international chamber music competitions such as the Ottomani Competition, Who’s Next International Chamber Music Competition, the Storioni Competition and the Orlando Competition. At the Salieri-Zinetti Chamber Music Competition in Verona, Italy, the quartet has won the second prize.
Their participation in the International Chamber Music Campus in Weikersheim, Germany, was awarded with a prize for one of the most convincing newcomer ensembles 2016. During the renowned Verbier Festival 2017 the four musicians received the APCAV prize. In the season 2016/2017 the quartet has been touring throughout the Netherlands as a laureate of the competition “Dutch Classical Talent”. In addition, the quartet made its debut as soloist with the Bayerisches Landesjugendorchestra and is currently touring with their music theater program for children “Het pleintje van Meneer Sax” produced by Stichting Oorkaan.
Having studied together in the class of Arno Bornkamp in the Amsterdam University of the Arts, the quartet finished its studies in the Masters program of the Netherlands String Quartet Academy (NSKA) with Marc Danel, Stefan Metz and Sven Arne Tepl. Furthermore, the quartet has attended masterclasses with renowned pedagogues such as Eberhard Feltz, Gerhard Schulz, Heime Müller, Luc-Marie Aguera, Peter Cropper, Albrecht Mayer, the members of the Artemis Quartet, Belcea Quartet, Kronos Quartet, Quatuor Ebène, Cuarteto Casals, Jerusalem Quartet and Pavel Haas Quartet.
The debut album of the Ebonit Quartet “The Last Words of Christ” with music by Haydn, Webern, Sibelius and Shostakovich was released in February 2016 on CHALLENGE Classics and got nominated for the prominent Dutch prize “Edison Klassiek 2016” in the category “Het Debuut”.
In 2018 Ebonit’s second CD “Arabesque” was released on 7 Mountain Records and got described as “pure magic” in Dutch newspaper “de Volkskrant”.